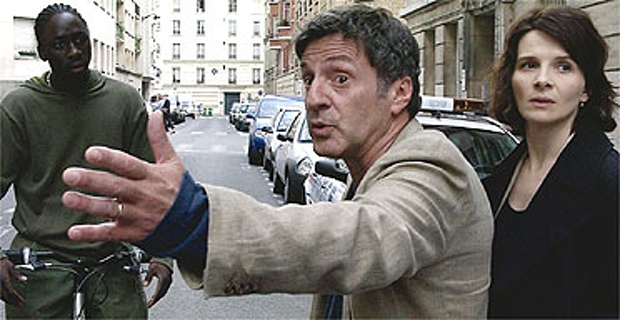 Georges (Daniel Auteuil) and his wife Anne (Juliette Binoche) are going though a bit of a rough spot – with each other and with their teenaged son, Pierrot (Lester Makedonsky).
Georges makes his living as the presenter of a TV arts show, but the central part of his film sees him on screen against his will – a stalker is filming the outside of their house, watching the family coming and going, and periodically leaving a copy of the tape on their doorstep.
Soon, the cassettes are accompanied by creepy child-like drawings, featuring stick-figures bleeding.
The police refuse to consider any kind of investigation, until Pierrot goes missing, and even then, they’re not interested in the tapes or drawings.
Georges and Anne are put under further pressure – and further isolated from their friends – as they’re left to their own devices during this time of crisis.
But Georges has an idea who could be behind their torment, and starts digging into his past to find out whether an Algerian boy he might have wrong during his own childhood might be trying to get his revenge.

Haneke is content to pose thought-provoking questions without providing particularly satisfying answers. As far as he seems to be concerned, it’s more important for his audience to wake up and engage with the subject matter – a thinly veiled criticism of the French treatment of immigrants – than to relax and let an unchallenging story flow past them.
To give the audience the same sense of unease as the couple at the film’s core, Haneke plays with cinematic conventions, for example, by suddenly stopping the film and winding it back before our eyes and replaying it. The effect is that as viewers, we’re never quite sure whether we’re watching real events or a tape recording, courtesy of the stalker.
The film is also deliberately slow, allowing Haneke to take advantage – or ignore – the false sense of security into which he lulls the audience.
The director also lives up to his wish to shock viewers, with at least one scene that will – provocatively and unquestionably – have everyone screaming and hiding behind the seat in front.
The film is very much centred on a small group of key characters, with the supporting cast hardly even worth mentioning, but Auteuil and Binoche deliver exactly the kind of naturalistic performances you’d expect from two of the leading lights of contemporary French cinema.
While considerably more digestible than Haneke’s previous film, The Time Of The Wolf, it’s certainly not the kind of commercial movie that will satisfy a mainstream audience.
All but the most patient and adventurous art-house viewers, seeking an intellectual challenge, will probably find it to be pretentious – if classy – filmmaking, that leaves them in the cold – and leaves its true meaning hidden.