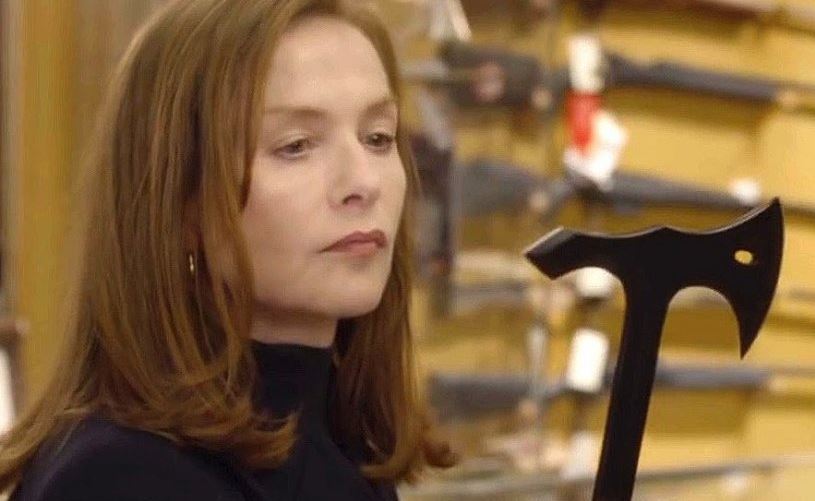 Her personal life is a bit more complicated. She’s somewhat embittered, divorced from Richard (Charles Berling) and while she tends to have little problem jumping from man to man, she’s finding it hard to come to terms with the fact that Richard seems to have moved on emotionally.

Then, one day, her outwardly stable world implodes…

…She’s closing the windows at her imposing home, when a masked intruder bursts in, knocks her to the ground and rapes her.

This assault taints everything. She’s paranoid at home. She starts doubting staff members who she thinks might have been the attacker. She starts to question one of her relationships. And she starts to consider how she’ll respond when she finds out who has sent her life on this new, darker path.

Basic Instinct director Paul Verhoeven had planned to make this film in Hollywood, but the studios were uncomfortable with the subject matter, so he ended up making his first French-language film. And it’s hard to imagine this any other way. It feels like the kind of dark, French thriller that graced cinema screens in the 1990s.

It’s been billed as a “rape revenge thriller” but it’s never quite clear whether that’s really what’s happening. Michèle is brutally raped at the beginning, there are thriller elements in the middle, as she tries to identify her attacker, and there’s certainly the feel of revenge towards the end, but her motivations are never that straight-forward, despite – or perhaps because of – Isabelle Huppert’s perfectly honed performance.

Is Michèle a calculating alpha-female hell-bent on revenge at any cost or is she simply an emotionally damaged woman who’s become increasingly accustomed to dangerous and unhealthy relationships? Is she preparing for revenge or self defence? Is the ambiguity a narrative strength or weakness? Is Verhoeven aiming for misogynistic titillation or female empowerment?

Different viewers can make up their own minds – but on the surface, at least, it’s a slick and glossy French thriller, whose narrative threads fit together rather too conveniently and with a sub-plot, revolving around Michèle’s grown-up son, which is laced with some deliciously dark humour.