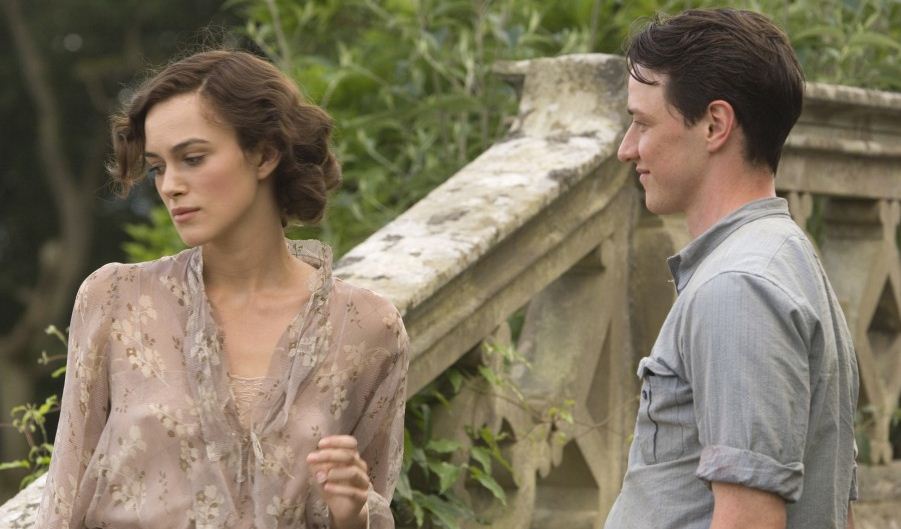 1935 England, and the country estate of the wealthy Tallis family; precocious thirteen year old Briony (Saoirse Ronan) has just finished writing her first play. She’s rehearsing it with her cousins to put on at a formal dinner party.
Among the guests will be Briony’s sister Cecilia (Keira Knightley), their young cousin Lola (Juno Temple), the house-keeper’s son Robbie (James McAvoy) and the owner of a local chocolate factory, Paul Marshall (Benedict Cumberbatch).
Tensions are brewing in the run-up to the big night: Cecilia and Robbie are seen having a heated exchange by a fountain in the grounds, Briony’s having trouble with her actors, Paul is flirting with young Lola and Briony walks in on Robbie getting intimate with her big sister in the library.
During the dinner, the adults realise that two of the children are missing and the guests spread out across the sprawling the grounds to find them. Briony hears some moaning in the darkness and disturbs someone sexually assaulting Lola. The assailant jumps up and disappears into the shadows.
During the ensuing police investigation, Briony announces that she knows Robbie was the attacker and he’s led away – from the house, from her life – and from a blossoming love affair with Cecilia.
Atonement tells the story of how Briony copes – later in her life – with the tragic consequences of her loose-tongued assertion.

There’s no doubt that this film looks and sounds fantastic – from the elegance of the country estate and Knightley’s outfits to the way the tapping of the type-writer keys is expertly weaved into the score – and a lengthy steadicam shot on the war-torn beach at Dunkirk is yet another sign that Joe Wright knows how to make a film that appeals to the senses.
But it fails to have the same effect on the heart and mind as it does on the eyes and ears.
It sets itself up – certainly from the posters – as a tragic, unrequited love story, centred on Cecilia and Robbie, but the title betrays the fact that it’s actually a film about how Briony atones for her sin.
But how much of a sin was it? Did she knowingly lie or mistakenly point the finger in the wrong place? And did she even atone? Without giving anything away, when we see her looking back on these events as an old woman, she certainly doesn’t seem to have suffered too much by comparison – if anything, she’s actually come off rather well, as a result of the story she has to tell.
And as for the central love story, when we first meet the characters, there’s an unspoken love-hate relationship going on which is ill-explained, and when they are torn apart, the relationship doesn’t seem to be mature enough to warrant the tragedy that follows.
OK, so it’s sad, but far more intense and worthy relationships are destroyed in far more tragic ways in other films.
And moments in the film which are clearly meant to be significant – the tiff at the fountain, the walk across Dunkirk beach – are more style than substance – and supposedly clever editing, that’s meant to give you a different perspective on certain events, doesn’t appear to be as revealing as it thinks it is.
James McAvoy comes across best from an acting point of view…but he has the most to work with, which is odd, given that he is in many ways the object, rather than the subject of the film. But the emotional restraint of both Cecilia and the older Briony means that neither actress has much of an opportuntiy to show off her acting ability.
On an emotional and intellectual level, the film fails to live up to the hype, but that almost certainly won’t stop Oscar nominations flying its way come January.
On a superficial level, you leave the film feeling that you’ve experienced a grand piece of cinema, but it doesn’t really live up to scrutiny afterwards – the more you think about it, the more frustrations emerge, so I’ll post this review now, before I have to knock off another half a star.