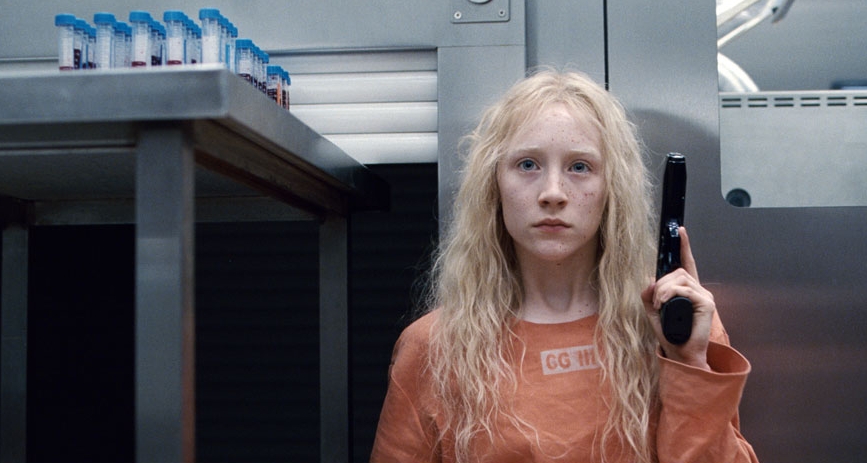 Teenager Hanna (Saoirse Ronan) lives with her father Erik (Eric Bana) somewhere in the Arctic Circle, in a remote, snow-covered hut that keeps them hidden from the world.

They’re completely self-sufficient – and incredibly well trained to protect themselves from anyone and anything.

Hanna is growing up and needs more from her life. She wants to leave the wilderness but Erik warns that if she does, that’s it – he can no longer protect her. It’s a risk she’s prepared to take.

As she brakes her cover, a government agency headed by Marissa (Cate Blanchett) manages to trace her and the chase is on.

Marissa and her cronies follow Hanna around the world, with Erik in tow to try to keep an eye on her.

Hanna has a lot to learn about her past if she wants a future – Marissa wants to try to stop her on both counts.

This is a rather striking change from the film that broke director Joe Wright into the big time – Atonement. He’s gone from a talky period piece to an all-out action film.

The background plot is rather silly – Hanna is the product of a secret agency project and Erik is trying to hide her from the world for her own protection, but when the agency discovers her whereabouts, they have to hunt her down.

The presentation is incoherent and there are too many convenient moments where characters just happen to bump into a useful person when necessary or turn up at a particular location at the right time for a key plot point to unfold.

It’s basically an excuse for some striking scenery and visually impressive stunts, chases and fight sequences.

Saoirse Ronan rises to the challenge of an interesting role, which she delivers with maturity – but little empathy; it’s hard to identify with a teenaged assassin who doesn’t know her history or purpose.

Hanna is one of those films where the main characters are asked to employ inexplicably surreal accents, leaving you wondering why, if they wanted a German actress, they didn’t just find one and subtitle the film. Fobbing this off with an expositional suggestion that part of her training included learning lots of languages doesn’t really cut it.

The overbearing score, by the Chemical Brothers, renders much of the more inventive elements of the cinematography little more than a dance-music video, which doesn’t fit the film as well as music, used to similar effect, in Run Lola Run.

Hanna has interesting elements, but it’s certainly silly and not particularly rewarding.