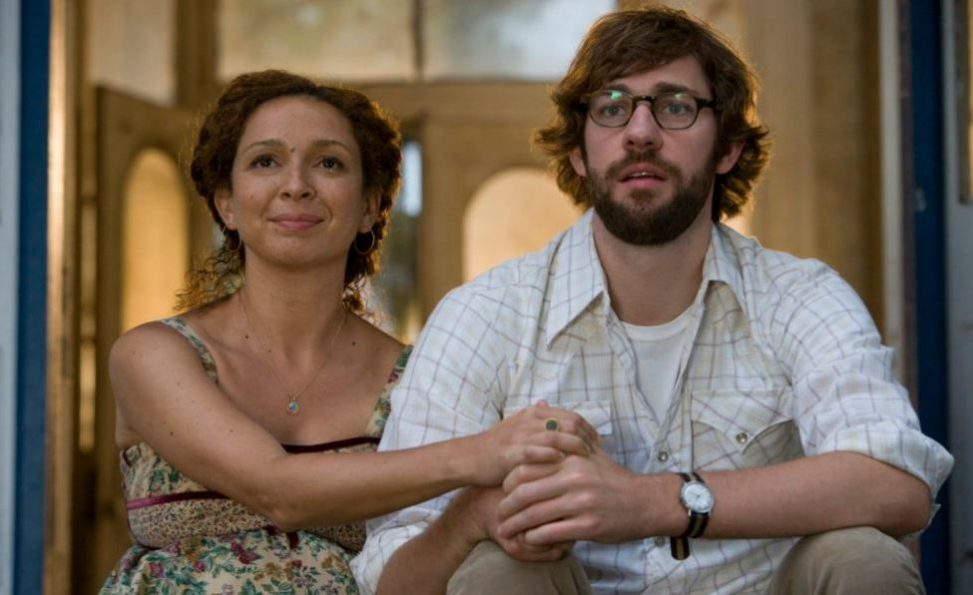 Burt (John Krasinski) and Verona (Maya Rudolph) have been dating long enough that they might as well be married – but Verona insists it’ll never happen – not even now that she’s pregnant.

They’re such an easy-going, loving and supportive couple that it really isn’t an issue. Foremost on their minds right now is how they’re going to cope, with a baby on the way and not much money coming in to support them in their remote shack of a home. They’ll certainly need all the help they can get from Burt’s parents (Jeff Daniels and Catherine O’Hara), who live nearby.

During a dinner-trip to his parents, they inform the expectant couple that they’ll be able to offer them all the help they’ll need – as long as they’re not in Belgium. But as (the couple’s poor) luck would have it, this baby has come along at a bad time – the expectant grandparents have apparently been planning to move to Antwerp for years.

With no more ties to the area, Burt and Verona have just three months left of the pregnancy to decide what to do – where to move to, where they can make a suitable home for their daughter, earn a decent living and have as much of a network of friends and family as they can muster.

Away they go, criss-crossing North America, searching for the perfect place to lay roots once and for all.

This light-hearted, perfectly enjoyable and effortless romp across North America is a world away from the misery we’ve grown to expect from Sam Mendes, who introduced himself to the world with an Oscar for American Beauty, following up with the dark period gangster thriller, Road to Perdition, the Gulf War film Jarhead and last year’s marital breakdown drama Revolutionary Road.

But based on this, Mendes is much better suited to grim reality than quirky fantasy.

While the lead characters are charming, tremendously likeable and largely rooted in reality – if a little eccentric – it’s simply a step too far to imagine that every last person both of them knows is a quirky kook.

We all know the odd crackpot, but they’re the exception, not the norm. Here, we have with immature parents, the alcoholic exhibitionist and her hen-pecked introverted husband, the new age monsters, the foster parents who seem to be trying to build up a full set of children to represent each country in the United Nations.

Oddly, too, this weird and wonderful catalogue of thoroughly odd people aren’t actually that funny and the sense is certainly that this is meant to be funny. The film washes over you without really making you feel very much at all.

And by the very nature of the plot’s structure – an attempt to find a new home – there’s little interaction between the segments, making this film almost a string of unrelated anecdotes, any one of which could be removed without actually affecting anything.

Even character traits that are introduced in the opening scenes are soon forgotten – Burt’s insecurity making him want to sound more intelligent than he is, neatly mirrored in the behaviour of his father, fails to reappear during the rest of the film.

You’ll come away feeling warm and fuzzy but you won’t feel you’ve learnt anything about the world, as everyone in this world is too removed from reality for anything they do or say to have any significance to normal people.

And the denouement is so facile as to make you feel they’ve wasted their time – did they really need to go through what they’ve gone through – visiting the few people they actually know, scattered around the country – to come to the conclusion they eventually reach?