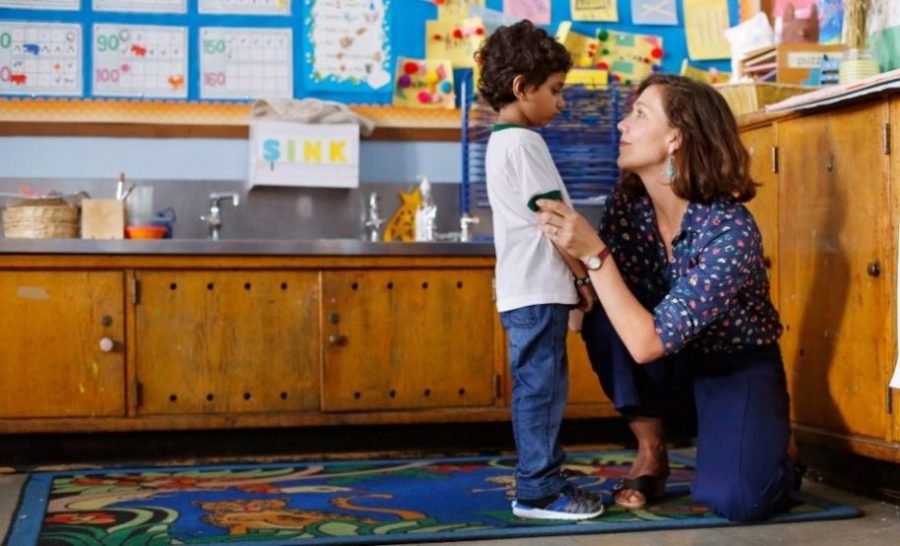 New York kindergarten teacher Lisa Spinelli (Maggie Gyllenhaal) is just a little frustrated by her rather mundane everyday life and the complete lack of interest that her teenaged children seem to show in anything.

She takes poetry evening classes to try add some meaning and culture to her life.

One day at school, she catches a five year old pupil, Jimmy (Parker Sevak) reciting a poem – intrigued, she writes it down and reads it out at her next poetry class. Everybody – including the teacher (Gael García Bernal) – loves it.

Day after day, Jimmy recites – off the top of his head – poem after poem. Lisa realises that as a child who receives little attention from his family, writing poetry is his own escape from the emotional wilderness he finds himself in.

Lisa slowly becomes obsessed with Jimmy’s precocious talent and is determined to help him realise the potential that – as a five year old – he has no idea even exists. But as she puts Jimmy and his poetry before everything else, her own life starts to crumble around her.

Question: How far should a teacher go in nurturing a talented pupil?

Answer: Not as far as Maggie Gyllenhaal’s Mrs Spinelli goes in this slow-burning film, adapted from a 2014 Israel film of the same name.

The contrast between the bright, busy and bustling classroom and Lisa’s gloomy home highlights the tedium she’s trying to escape – which makes you feel somewhat sorry for her perfectly loving and supportive husband, who seems to get the worst deal of all in this tale.

The building obsession is neatly handled – at first, any viewer would share Lisa’s marvel at the astonishingly profound and beautifully structured words emanating from a five year old boy who couldn’t possibly understand the depth of meaning in what he was uttering. We might share her wish to encourage Jimmy to write, to inspire his imagination and to ensure that others become aware of his prodigious talent, particularly in the light of the apparent lack of interest from his family.

But, as is necessary for drama, there comes a point where her actions very quickly veer from where anyone else might go and before long, audiences will hang their heads in despair as Lisa takes one step after another into the realms of madness.

It’s a tough one to judge, because the actions of the protagonist become so far removed from the norms of standard human behaviour that it makes it difficult even to begin to empathise with her. This is magnified by the fact that she doesn’t have a terrible life that most film characters would be desperate to escape – she has a satisfying job, a loving husband, two healthy and independent teenaged children and a hobby that gives her a little creative freedom.

Yes, she sees the opportunity to encourage another child in an endeavour that means something to her in a way that she failed to do with her own children, which further gives her the opportunity to live vicariously through someone else’s talent, talent that’s been denied to her. But mature adults – especially those with the future of the next generation in their hands – would close their eyes, dream of what might have been, and move on with their lives, rather than showing monstrous, naive irresponsibility.

The denouement is emotionally confused, driven by the actions of the child but seen from the point of view of the adult.

It’s clearly a film about mental breakdown, rather than about precocious talent – it’s called The Kindergarten Teacher rather than Gifted, for example – but while it raises interesting questions about how to deal with the child, it doesn’t present any useful answers about how to recognise or deal with mental illness – none of her family or colleagues seem to question the attention she is giving to the child, for example.