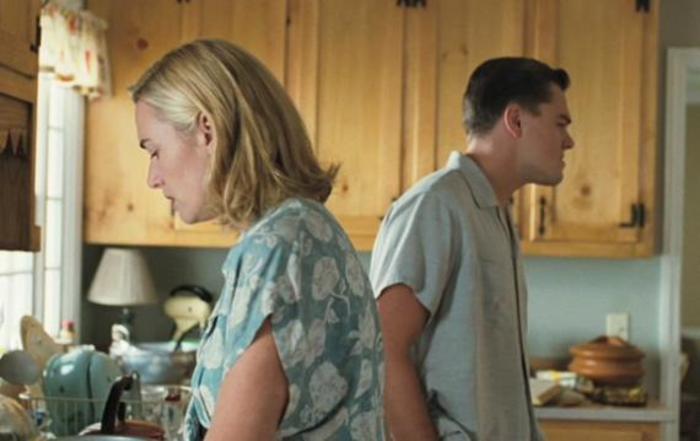 Set in the 50s, a handsome young couple, Frank and April Wheeler (Leonardo DiCaprio and Kate Winslet), and their two kids live in the picture-perfect Connecticut suburb, while Frank commutes to Manhattan where he works as a salesman at a large corporation.

One day, April, who is stuck at home, decides that she had enough with this empty, hopeless life and suggests to Frank that they move to Paris, where they could live life to its fullest. She tells Frank that she will work and support him, while he endeavours to find himself. Initially Frank is excited by the idea and begins to prepare for the drastic move.

But when Frank is offered a job promotion and a massive pay rise, reality hits home. April, however, is not impressed and remains determined to move to Paris. Inevitably, the Wheelers’ life descends into a hellish existence.

Revolutionary Road, like Sam Mendes’ first film, American Beauty, deals with the tragic consequences of a troubled marriage. This time, however, the troubled soul is that of the woman, April, who ultimately pays the heaviest price.

The film presents April as a neurotic, frustrated and desperate woman, who can’t control her urges. At one point, Frank suggests that she is insane and needs to see a shrink. But is she?

How many women sit at home and feel trapped in their marriages and fantasize about a fulfilling life somewhere else. In fact, you don’t need to be a bored housewife to entertain such wishful thoughts. Many of us feel trapped in a world of emotional sterility and mundane conformity and dream about an exciting life somewhere else, but only a few dare to take the step and leap from the comfort of security into the thrilling uncertainty. Do you call that insanity?

In fact, we admire those who dare to do what we can’t. Some of them fail and sink into oblivion, but others become stars, presidents and businessman, who ultimately lead the world forward. That is what April wants for her husband. She believes that Frank deserves and can do better.

Although Frank shares April’s dreams and ambitions, he is the realistic man, who represents the silent majority. He is faced by two terrible choices: either risk total ruin for his family by forgoing his well-paid job and leaving for Paris, or risk upsetting April, by not fulfilling her wishes. For a rational person, the choice seems obvious, but not when you’re dealing with an irrational wife.

The film is heavily driven by dialogue, so much that it doesn’t give us time to emotionally grasp Frank’s predicament as he struggles to make his fateful decision. Having said that, the performances of Kate Winslet and Leonardo DiCaprio are so riveting and electrifying that you feel glued to the screen and totally absorbed by the story.

The photography is eloquently used to enhance the tragic disintegration of the Wheeler’s married life. Brighter colours and soft lighting are used in the beginning, to reflect their simmering amorous relationship and later, they’re replaced by muted colours and harsh-contrasted lighting as the heartbreaking schism between the two takes course.

This is a very powerful and thought-provoking film that will resonate with a lot of people. Frankly, it’s dark, very dark and quiet depressing, but it’s emotionally thrilling and, dare I say, thoroughly entertaining.