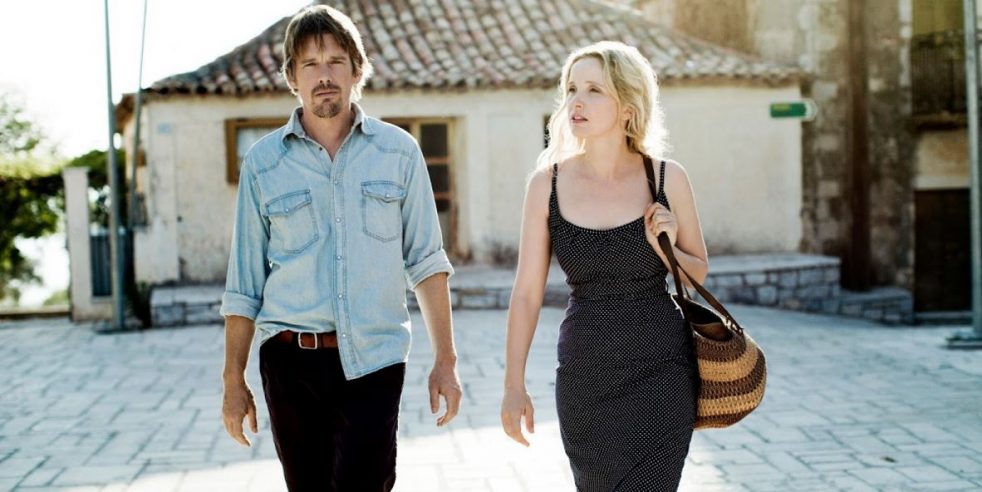 Nine years after we last met them in Paris, when they had until sunset to catch up, nine years after they’d first met on a train to Vienna, Jesse (Ethan Hawke) and Celine (Julie Delpy) are holidaying in Greece.

They’ve been together since we last spent time with them – living in Paris, with their twin daughters.

On this holiday, at a writers’ retreat, they get a rare chance to spend some time as a couple, while someone else babysits. Life has got in the way of their relationship, and this is the first opportunity they’ve had for years to walk and talk – of course – and assess what they have and where they’re going.

And to the surprise of both of them, family life has taken over and hidden some uncomfortable truths.

There are the kind of sequels where, soon after the protagonists have navigated one set of obstacles, they have to navigate another – superheroes who have to face a string of different bad guys in a string of sequels. But more rare are the kind of sequels where we get to spend additional time with a set of characters, several years later, dipping into their lives at extended intervals, to see how they’ve moved on.

François Truffaut showed us how Jean-Pierre Léaud’s Antoine Doinel developed from his mid-teens to his mid-30s and Richard Linklater continues his odyssey with his stars and co-writers Julie Delpy and Ethan Hawke, through the lives of the charmingly loquacious Celine and Jesse.

But while the first time we met them, there was a sense of magical expectation and hope in their chance encounter, and the second time we met them was only the second time they themselves had met – as much of a surprise for Jesse, at least, as it was for us, this time, we discover early on that they’ve been living together for some years as a family. Much of what made their previous encounters so magnetic was the ticking clock – how much wisdom could be exchanged before one or the other had to jump on a train or a plane and real life continued; this time, the conceit to get them walking and talking is a babysitter – being together is real life. And quite what’s going to happen at midnight, who knows?

In this sense, the set-up feels a little contrived – it’s a stretch to believe that it’s taken nine years for the pair of them to have a chance to chat – doesn’t Paris have any babysitters?

While this film is, as you’d expect, full of lengthy scenes of welcome talking, much of the dialogue takes place between Jesse and his fellow writers at the retreat or indeed between all the writers and their partners, rather than just between the protagonists – but most viewers will come to this film to catch up with Jesse and Celine – not to find out what some writers we neither know nor particularly care about think about this aspect of life or that.

Some of the key conversations in the film are enlightening and feel tremendously real. They have the authenticity of a couple that hasn’t had the chance to take a step back and realise that their relationship has actually changed over the years. Celine, interestingly, demands romance from her man, but she fails to live up to her own demands. She highlights how modern women find themselves trapped in a battle between feminism and fairytales; she thinks she’s a realist but she’s trying to live up to an ideal that doesn’t exist, so there’s no way Jesse can deliver what she desires.

Many couples will relate to the way a relationship can warm up and cool down with inexplicable speed – one minute, they’re getting on tremendously, laughing about old times, looking forward to their old age and about to jump into bed – but the next, their relationship seems to be on the verge of collapse – over apparently nothing. To a degree, this feels believable, but equally, the fact that they’ve been together happily for years, yet one conversation on holiday takes them to the brink of a break-up, when neither has actually done anything wrong, seems to push the boundaries of believability just a little.

Having said that, the film effectively highlights the fact that when children are around, everything is about them and couples, perhaps, forget – or don’t get a chance – to talk about what actually matters to them. And that certainly feels real. And its certainly interesting to watch a couple we first met in their early twenties having to grapple with the difficulties that parenthood throws into the mix.

It would be interesting to see whether men and women have a different response to this film, as from a male perspective, the film I saw was about how an apparently banal discussion degenerated into a mud-slinging argument on one side, with the other being drawn in inexorably, ambushed and with no way out. She pleads rationality, while being completely irrational – while for him, there is no escape but to accept her lack of logic and concede. Men will certainly side with Jesse, against this oestrogen-infused monster – he’s an angel for not storming out of the room. But will female viewers see it that way?

Another problem is the way they walk around – not like a couple in love, or flirting with each other, or who are comfortable with each other, but equally, not like a couple who’ve fallen out of love, trying to keep their distance or jerking backwards at each accidental touch. They seem more like old friends, catching up, years after they last met – as you might have expected them to be walking in the previous installment.

There does seem to be a little too much walking & talking and not enough happening – but that’s this film – and the franchise it joins. And when there are problems with both the walking and the talking, there’s a problem with a film that’s built around walking & talking.

But while it has its flaws, seeing a pair of well-matched actors delivering so much well-crafted dialogue, against the background of some gorgeous Peloponnese scenery, there are more hits than misses and there are plenty of gems for those who are patient enough to walk with Jesse and Celine and eavesdrop on their conversation.

Billed, for now, as a trilogy, all three parties have expressed an interest in revisiting the characters again in another nine years and perhaps another nine after that. It would certainly be welcome to catch up with them again, but how long can it go on? Before long, we’ll be invited to watch Before We’re Too Old To Walk and Talk.