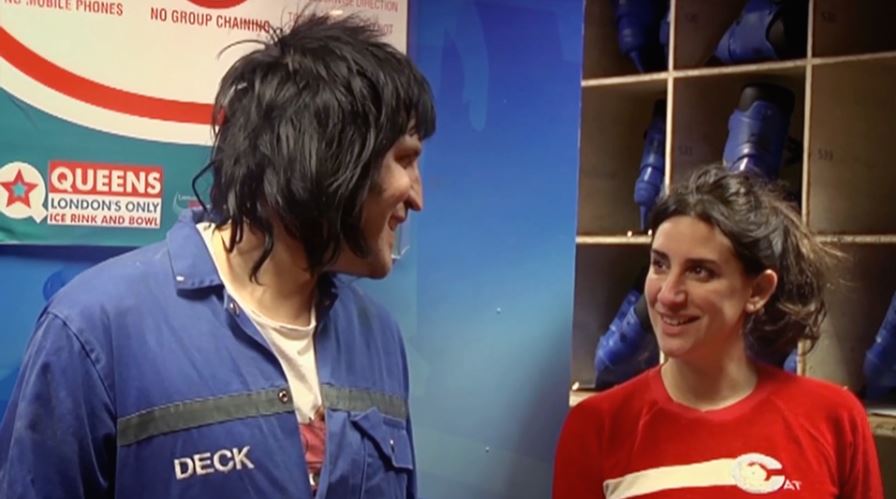 We’re in London, and relationships are breaking up all around us.

Elliot (Julian Barratt) and Raymond (Oliver Maltman) have had a one night stand, but Elliot just can’t let go.

A heavily pregnant Layla (Mercedes Grower) has fallen out of love with Daniel (Noel Fielding).

Rhys (Roland Gift) stays out as long as he can so that he doesn’t have to come back home to his lonely wife Brinie (Kerry Rox).

Film director Alan (Peter Wight) is trying to let his flighty and flirty actress girlfriend Livy (Julia Davis) down as gently as possible – not only is she not right for the role in his latest film, but she’s not right for him either.

We also meet John (Steve Oram) whose relationship has been reduced to Skype, builder Johnny (John Milroy) who thought his luck was in when a pulled a posh bird in a pub and Peter (Paul McGann) has a difficult goodbye to his other half on a tube platform.

But for every break-up, there was once a love story. They just don’t all have a happy ending.

Written, directed by, produced by and co-starring Mercedes Grower, this set of largely darkly comic – or at least I think that’s the idea – vignettes is told in two sections, beginning with Part Two – the break-ups, before we’re presented with Part One – where we see the same couples coming together.

But what the individual stories are meant to tell us – and why they’re presented in this reverse chronology time-frame – who knows?

Some of the pairings are milked for comic purposes, to varying degrees of success. And in many cases, even when we see the couples meet, we’re not convinced that they should have got together in the first place. And even if it looks like a couple might have been right for each other, few sparks fly on screen and their encounters often feel disappointingly bland.

Perhaps a little cross-pollination between the stories might have added a bit of fizz – giving some of the stronger cast members to bounce off each other, rather than be restricted to a single character with whom – by definition – they have no chemistry.

There is some good work here – the storylines involving Julia Davis, Noel Fielding and Kerry Fox have enough pathos and depth to engage audiences – some of the characters are even quite empathetic – but even the better vignettes are ultimately pointless; they have nothing to say about anything. Once upon a time they met, they got on, they got together, they grew apart and they broke up.

Every break-up has its own story and none of these is particularly any more dramatic than anything that many viewers will have experienced for themselves. And having so many couples to follow makes it hard to keep up and we never get to know any of the characters well enough to care when things don’t work out.

We also see only the initial meeting and the break-up so we get little sense, in most cases, of what went wrong over time – this is less of an issue for the two one-night-stands – but what’s the message there? People regret what they do when they’re drunk? Some people fall in love at first sight but others don’t?

There are no particular themes to be drawn from these or lessons to be learned about how to make relationships work.

Many other films have used a reverse time-line – Memento and Irreversible are two that spring to mind and which use the tool to an effective end – but here, it serves no purpose at all, not least because there are no great love stories that come crashing to the ground and no revelations that make you reinterpret what you’ve already seen. Discovering that these ex-couples once liked each other adds nothing. Of course they did, or they wouldn’t have been couples – for however brief a time.

The production style is similarly dysfunctional – a number of camera set-ups are completely out of focus – there are different cameras, formats and aspect ratios used from vignette to vignette for no discernible reason – except in the case of the Skype call – and the dialogue is improvised, which in some cases makes it sound light and springy but other times quite dull and leaden.

In truth, it’s very difficult to know what to make of Brakes. Mercedes Grower has clearly not set out to make a conventional film with a conventional narrative, so it would feel a little unfair to judge it in those terms. But if the BFI saw fit to fund it, audiences should at least expect to be engaged and entertained and take something away with them, rather than wonder why the BFI is spending public money on such a pointless mess of a vanity project.

All anyone is likely to take away from the nihilistic and somewhat depressing experience is to feel that there’s no point working on a relationship, as it’ll probably collapse anyway – relationships, according to Mercedes Grower, appear to be disposable. And for the weakest of reasons. Or at the very least, she’s telling us that couples who break up liked each other when they got together.

And if it’s about the characters and their stories, rather than the message – they’re simply not interesting, varied or even likeable enough. Many of these characters don’t even deserve happiness, or shouldn’t be in the relationship anyway, so you’re relieved when they break up and are rather disappointed when the time-frame shifts and we have to watch them get together again.