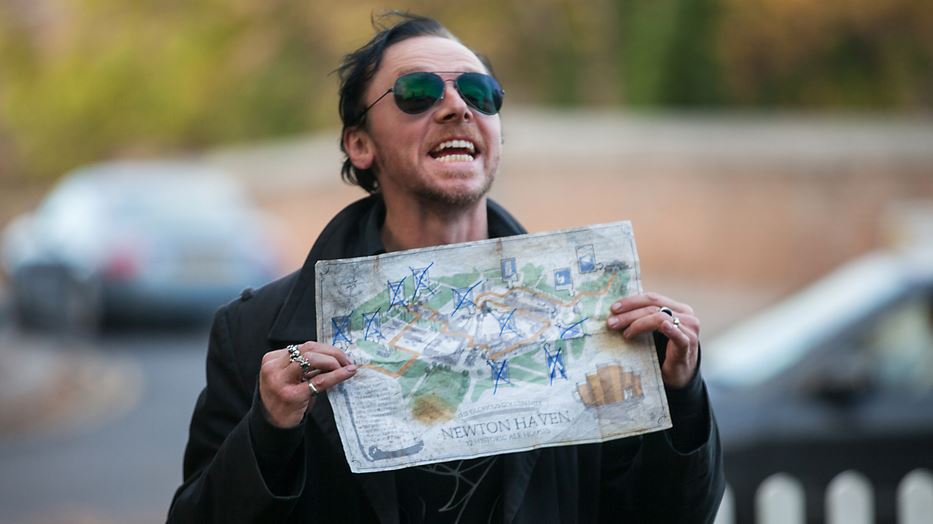 Twenty years after leaving school, Gary King (Simon Pegg) is going through a bit of a mid-life crisis. He decides to perk up his spirits by reliving his youth. His plan: to round up his class-mates to make a second attempt – two decades on – at completing a notorious pub crawl in their home village, Newton Haven, having a pint in each of the twelve pubs. On their last day at school, they failed to complete the course, so this would be their chance for redemption.

Pushing forty, Gary is a bit of a loser – a goth with no job and still driving the same car he had back at sixth form. The others have made somewhat more of their early adulthood. Oliver (Martin Freeman) is a high-end estate agent. Steven (Paddy Considine), Peter (Eddie Marsan) and Andrew (Nick Frost) are also doing well. Andrew – just to add a little conflict to the pub crawl – is now off the booze.

The five arrive in Newton Haven to find that no-one remembers them – and the pubs have lost their charm and their individuality. Like Steven, Peter, Andrew and Oliver – but unlike Gary – Newton Haven has moved on. As if there’s not enough unease between Gary and the rest of the group, as they realise he hasn’t grown up, Oliver’s sister Sam (Rosamund Pike) joins them, adding some sexual tension, as the object of desire of both Gary and Steven.

As they start working their way around the Golden Mile, their personal differences are cast aside as they learn why Newton Haven has become so strange; it’s been invaded by body-snatching aliens.

Few people going to see this will be buying their ticket based on any poster, review or interview. It’s the third film in the Cornetto trilogy, so-called not because of any narrative link between the characters or plots but because writer/director Edgar Wright, writer/star Simon Pegg and co-star Nick Frost have featured a different flavour Cornetto in each of the films, Shaun of the Dead, Hot Fuzz and now The World’s End.

Fans of the previous films will be itching to see whether the high standard can be maintained. The team have a good go, but their third film together lands some way short of the heights of their first two. But that by no means makes it a failure.

It’s aimed at 40 year old men who are themselves going through a bit of a midlife crisis – and most specifically – the subset of that group who loved Shaun of the Dead and Hot Fuzz. This might not be a huge cohort, but it will be sizeable enough to attract a large, satisfied audience. While not as sharp or original as the earlier films, the script bristles with enough one-liners to raise a laugh, although it’s mostly Simon Pegg’s throwaway lines that reach the quality fans might have been hoping for throughout.

Some in-jokes add to the enjoyment, while others fall a little flat and there’s a missed opportunity to refer back to their first film with a running “you’ve got blue on you” line.

The World’s End refers to the final pub on the Golden Mile, but as each pub’s name has a somewhat literal double-meaning, with an impending apocalypse already obvious long before they arrive there, it’s clear that this film is a very British version of the recent This is the End, with a gathering of a drunken group of friends being disrupted by the end of the world.

The film doesn’t develop the characters enough for us to care about them, which is a particular problem in the case of Simon Pegg, at its heart. It’s also a shame that some fine British acting talent goes untapped.

The gags aren’t strong enough and the plot is clunky, as it switches from a reflective reunion comedy drama to a full-on alien invasion apocalypse, with – like it’s American predecessor – the first part being more entertaining and effective than what followed.

The target audience will love it, but others might feel that the film-makers were on another planet.