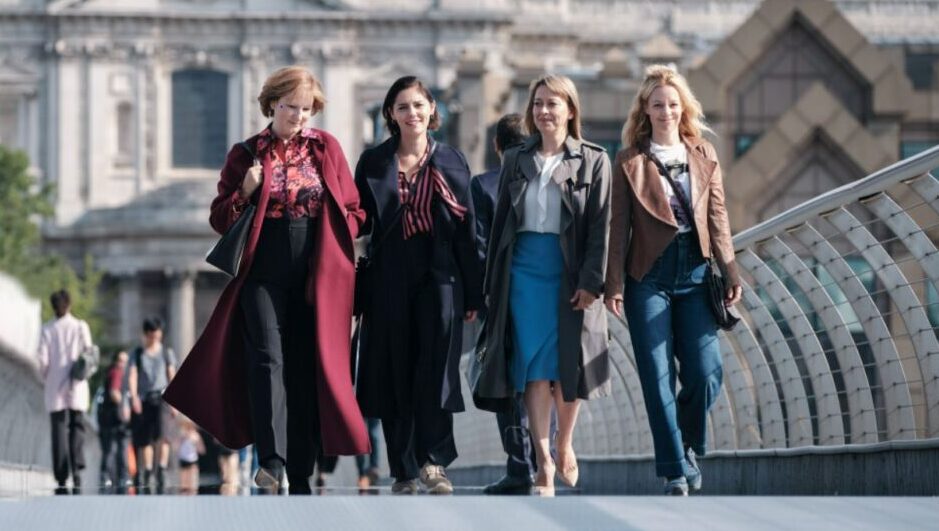 The Split is the aptly named three-season drama about a high profile family of lawyers, who fall in and out with each other and their partners as they’re dealing with everyone else’s divorces.

The matriarch, Ruth Defoe (Deborah Findlay) has long led the firm that bears her name, alongside two of her three daughters, Hannah (Nicola Walker) and Nina (Annabel Scholey). Her youngest daughter Rose (Fiona Button) still isn’t quite sure what she wants to do with her life – but she knows it’s not law.

Each season covers a major case from start to finish, while revealing a little more about the past and present of the various members of the wider Defoe circle.

Season One: Hannah has been married to barrister Nathan (Stephen Mangan) for nearly twenty years and has just left the family firm to work alongside her old flame Christie (Barry Atsma) at a rival company. She’s representing Meera Syal’s character in a messy divorce from Stephen Tompkinson’s philandering businessman. And the sisters are having to deal with the unexpected return of their estranged father (Anthony Head).

Season Two: Hannah is tossing up between whether to stay in her marriage or find out what could’ve been with Christie, while representing a TV star in her divorce from her controlling co-star. Nina, meanwhile, is involved in her own dangerous liaison.

Season Three: Hannah and Nathan explore whether their futures are destined to be together or apart. Don’t, by the way, call your show The Split, if you don’t what them to work out what happens. This time, Hannah is dealing with the unconventional divorce of her boss’s sister. And like their older sister, Nina and Rose find that their chosen paths to love don’t run quite as smoothly as they might hope.

The Split tries to do a lot and succeeds in some areas better than others.

We meet a family of lawyers whose own lives turn out to be every bit as dysfunctional as those of their clients which, on the one hand, is neat but on the other, is arch.

It’s where you sit on this divide that will determine how you feel about the show in general.

It’s constantly compelling – there’s no doubt about that – as secrets emerge – both among the family and their clients. It’s at once sexy and certain to put a strain on the relationships of everyone watching.

But as we move through the episodes, almost without fail, each development becomes more preposterous than the last, as relationships begin and end characters start behaving in bizarre ways that serve only to nudge the plot forwards. And too many characters seem to get written in or out on a whim. Or characters from earlier episodes might return for a particular important purpose and then disappear, without ever addressing why something so important didn’t get done after all; it was – of course – because the plot needed them in other ways and they hope we forgot whey they were ostensibly brought back.

The properties – whether residential or commercial – and the outfits – whether professional or personal – will have you salivating. But many elements that initially impress will quickly grate, as half of the plot unfolds through text messages, Hannah’s office seems to change from series to series – when she’s not supposed to have moved and the characters walk endlessly backwards and forwards over the Thames; it turns out that striding purposefully across the bridge becomes decreasingly dramatic.

Conversations that in real life would happen over the phone or by email take place in person, simply because it looks better on camera. And much of the narrative unfolds through uncomfortable exposition – whether it’s speeches at family gatherings, meetings in the boardroom or the rather ridiculous notion of a divorce-themed podcast, whereby characters pontificate about the nature of their job in a way that not even law students would want to listen; you pay your lawyer for their legal opinion – not for their view on the nature of a good divorce being better than a bad marriage or whether, while some marriages are just finite, others are worth fighting to save.

It soon feels more like a soap opera with inappropriate or inexplicable behaviour, filled with grand-standing soliloquies than a believable drama with characters you can really root for. Although – thankfully – the two main characters, Hannah and Nathan, almost always light up the screen together – and even when they’re screaming at each other like foxes in the night, you can still feel their deep love for each other.

There’s plenty of will-they-won’t-they and should-they-shouldn’t-they and some thought-provoking contrasts between a fling with a nameless nobody and an unspoken, ongoing passion for someone who’s all too within reach.

As much as you find yourself rolling your eyes, you’ll keep watching to find out the next cruel twist from the emotionally sadistic mind of creator Abi Morgan, and you’ll quickly settle into feeling like you’re part of either Team Nathan or Team Christie for that next conversation at the water cooler.