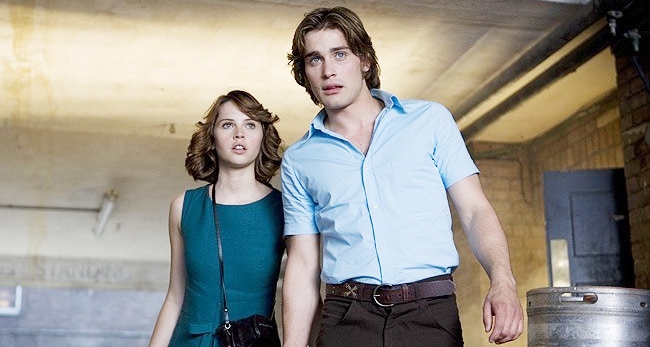 In 1973 Reading – or more specifically the suburb of Cemetery Junction – a group of young twenty-somethings are at that point in their lives where they’re trying to leave their childhood behind, desperate to stride into adulthood, but with little true idea about what they really want.

Freddie (Christian Cooke) would do anything not to follow his dad Len (Ricky Gervais) into the local factory and secures himself a job as a life-insurance salesman at a firm run by the no-nonsense Mr Kendrick (Ralph Fiennes).

On his first day at work, he bumps into his childhood-sweetheart, Julie (Felicity Jones), only to realise that she’s the boss’s daughter – and engaged to the boss’s number two, Mike (Matthew Goode).

Julie has ambitions to be a photographer, but in 1970s Reading, her destiny is pretty much to stay at home, give Mike babies and cups of tea – much like her mother (Emily Watson) did for Mr Kendrick.

Freddie’s two best friends have personal crises of their own.

Bruce (Tom Hughes) is a bit of a lout, never happier than when he’s starting fights in bars or painting breasts on billboards. He dreams of getting away from Cemetery Junction, but is too scared to do anything about it, staying, instead, with the alcoholic father he despises.

Then there’s Snork (Jack Doolan) – I’ll let him explain his nickname. He’s a simple character, who’ll happily tag along with anyone else, keen to talk up his sexual conquests, when everyone knows he’s the biggest sexual loser of them all. Chubby, he’s the butt of everyone’s jokes – I wonder where the inspiration for this character came from, Ricky!

This film follows a crucial few weeks in the lives of the group as they – as I believe the film world calls it – come of age.

The first thing to do before approaching this film is to forget it has anything to do with Ricky Gervais and Stephen Merchant. It is nothing like the TV work where they made their name – The Office and Extras – so not liking them will not mean you won’t like this. But if you do like them, don’t expect more of the same.

While both of their TV series are painfully comical and subtly satirical, it’s only their undercurrent of warm drama that makes it onto their big-screen debut together. And perhaps the small-scale visual ambition.

A cracking Elton John gag about five minutes in could mislead you into thinking that a comedy-fest awaits, but while there’s warm and subtle character humour throughout, at its heart, this is drama through and through.

As a piece of story-telling, it’s not particularly original or striking – half an hour in, you still won’t really know what the film is about, as very little actually happens. And how often have we seen coming-of-age stories – we’ve even seen them set in the 1970s and boring provincial towns.

Ricky Gervais, in a small role, plays the same character he always does – sympathetically funny, but the same, nonetheless. Stephen Merchant has a caricatured one-line role, nothing more than a vanity cameo. Ralph Fiennes and Matthew Goode are deliciously smarmy, but of the smaller roles, Emily Watson is the most remarkable, letting out years of emotional pain and extreme but resigned disappointment with minimal effort. Her role is heart-breaking.

But each of the main characters follows the only path that they can – to the extent that as soon as you get to know what they’re thinking, you can correctly predict exactly how their story will end, so there are no surprises to tweak an unoriginal set of stories.

But the writing, the direction and the performances are so skilfully executed that despite their cliché-ridden denouements, each one delivers exactly the right emotions – whether gripping your seats in excited anticipation or wiping sneaky tears from the corners of your eyes.

There’s not much to this film, but it’s impossible to hate it. Perhaps that makes it bland, but the music and other period details certainly give it life. It’s a heart-warming drama, with some humorous moments, that truthfully would feel more at home on Sunday afternoon TV than Saturday night cinema.