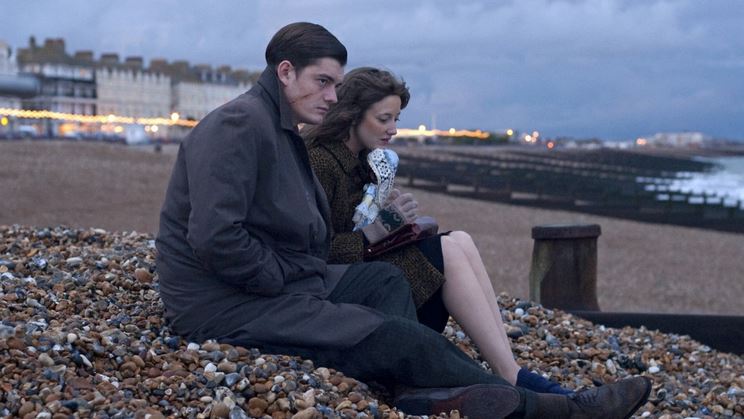 Pinkie (Sam Riley) is a young, razor-wielding Brighton gangster with delusions of grandeur. When the leader of his gang is stabbed to death, he starts jostling for position to try to stop any of the older, more experienced guys taking the reigns.

At the same time, Pinkie’s gang is jostling for position with the thugs working for the city’s main crime boss, the dressing-gown wearing, cigar chomping Mr Coleoni (Andy Serkis).

When a rival gang member is accidentally killed, Pinkie is sent in to sort out the one witness to the incident – sweet and innocent Rose (Andrea Riseborough), a young waitress in a cafe owned by local grande dame Ida (Dame Helen Mirren), who – as luck would have it – was also a good friend of the murdered gangster.

Before long, Rose falls for Pinkie, who realises that if he marries her, in law, she won’t be able to be forced to testify against him, allowing his murderous rise through the ranks of the grimy Brighton underworld to continue unchecked (apart from a little Catholic guilt) – until Ida starts looking into the circumstances surrounding her friend’s death.

Surely you have to be very brave – even mad – to try to remake one of the classic British films of all time, the Boulting brothers’ post-war adaptation of Graham Green’s novel.

Updating it to the 1960s and calling it a reimagining of the novel, rather than a remake of the film, won’t change perceptions of what’s going on in the background.

For his debut feature as a director, the writer of George Clooney’s recent The American, Rowan Joffe, makes the most of his new historical setting, presenting both the slums and the smart hotels of a seaside resort that presents family fun to the world as it harbours vicious criminal gangs beneath the surface – adding the Mods and Rockers conflict into the mix.

The film looks impressive, and the ominous score also does much to ramp up the mood of foreboding.

The style of this film is all the more essential because the substance is lacking. Sam Riley’s necessarily cold performance doesn’t have the menace of Richard Attenborough’s original Pinkie and he doesn’t generate any sympathy for the character. You wonder why you’re being asked to follow this guy’s story and root for him against the world. Yes, he’s evil – but not dramatically satisfyingly evil. He’s just a violent, selfish brute.

And as the sweet-natured Rose, Andrea Riseborough has little opportunity to explore her undoubted acted talent, because the character is too wet and wimpish for us to feel that she deserves our sympathy. That any woman would cling so hopelessly and desperately to someone so loathsome, who makes no effort even to pretend he likes her, makes one think she deserves whatever she gets.

Failing to ensure that the audience connects with any of the main characters is a huge failing in a drama and the most rewarding characters were the underused Dame Helen Mirren and John Hurt.

It almost feels like a case of the older generation popping in to show the younger actors how it’s done – but just a little too late to save this film.

The film feels like it thinks it’s big – the London Film Festival chose it for last year’s prestigious secret film slot, boosting it cinematic credibility – but it’s lifted by its heritage, rather than what’s been achieved here.