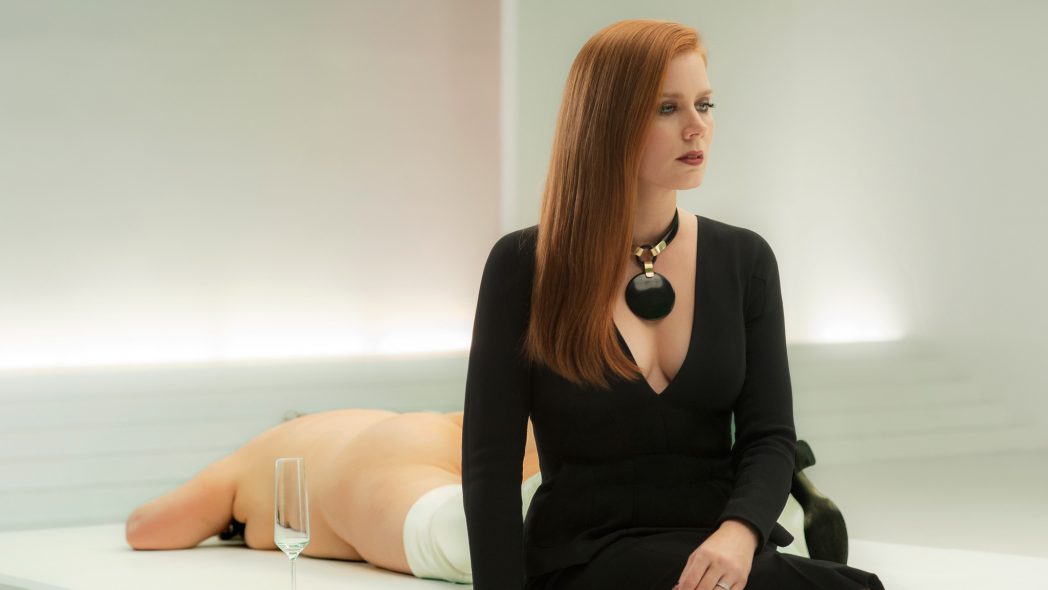 LA art gallery owner Susan Morrow (Amy Adams) is going through a rough patch professionally – and personally; her husband Hutton (Armie Hammer) always seems to have important business trips to make and doesn’t even make it to the openings of her shows.

An unexpected delivery makes her think back to her first marriage, to her childhood sweetheart, aspiring author Edward Sheffield (Jake Gyllenhaal), which ended nearly twenty years ago.

He’s finally finished his first novel and he’s sent her the manuscript for feedback.

With Hutton away again, Susan sits down to read Edward’s book and with each page, as she’s taken in by his story, she’s taken back to their past and reassesses her present.

For his follow-up to his debut feature A Single Man, fashion-designer-turned-film-director Tom Ford delivers an equally stylish film with arguably a little more substance.

There’s much for audiences to think about – regretting past decisions, getting the right balance between money/success and love/passion, the idea that we all become our parents, among other ideas – and Ford examines the world of the wealthy city folk who buy his clothes, as well as dipping his toe into a completely different world – the redneck low-lives of his home-state of Texas.

While on the surface, the “story in a story” element of the book within the film is neatly enmeshed in a way that flows well, there isn’t enough of a connection between the two stories, or even their themes, making you feel that Susan wouldn’t really be given pause to reassess her own life based on what she’s reading.

In the book, Tony (Jake Gyllenhaal again) takes his wife (Amy Adams lookalike Isla Fisher) and daughter away for a trip and they get terrorised by a bunch of hicks (led by a terrifying Aaron Taylor-Johnson) they encounter on the highway at night. It’s an effective thriller in its own right, with its physical violence and constant action contrasting with the cold stillness of Susan’s everyday life.

We follow a man – who she imagines to be her ex husband – who’s determined to seek justice for an injustice carried out to his loved ones – with the help of a maverick police officer, in the shape of another scene-stealing performance from Michael Shannon.

But apart from the fact that she pictures Tony as Edward and his wife as someone who looks similar enough to herself as to make you wonder why the producers didn’t save a salary – there is little in this story from which anyone in the LA art world could truly learn.

And some of the most interesting characters, who might be able to help the protagonist reassess her present life, disappear as soon as she immerses herself in the book. And since most of the “present” is simply Susan reading the book, we don’t really get enough of a sense of how she is actually responding to what she is reading, which means the emotional heart of this film doesn’t lie where you’d expect it to be – or need it to be. Audiences will identify more with Jake Gyllenhaal than they will with Amy Adams, who – to all intents and purposes – is the centre of the film.

Ford treats us – in effect – to three separate films – Susan in the present, her recollections of her early years with Edward, and the story of the novel he has finally written, nearly two decades after she told him she didn’t think he’d ever get it done. But what does that make the film? A drama? A thriller? Does it matter that it can’t be pigeon-holed? Or that different pigeon-holes apply to different scenes?

But there’s a sense that Ford came up with several stories and none quite had what it took to make a full feature, so he wound them together and hoped for the best. But one of the world’s most exclusive fashion designers should know that a perfect pair of trousers, a similarly jazzy jacket and a wonderful waistcoat that don’t quite match don’t make an entirely satisfactory three-piece suit.

The strongest element of Nocturnal Animals is the Texan crime story and the weakest is Susan’s present-day reading of the book, resulting in a tonal imbalance in the narrative that makes you wonder what Austin Wright, the author of the novel on which it’s based, had in mind.

Every part of Ford’s film looks perfect and is intricately designed and performed – but taken as a hole, it doesn’t have the thematic coherence that it seems to be aiming for and leaves you feeling emotionally cold. Perhaps it’s what the characters deserve – but it’s not where you’ve been led to believe it might end, making you feel a little cheated that you engaged as much as you did.