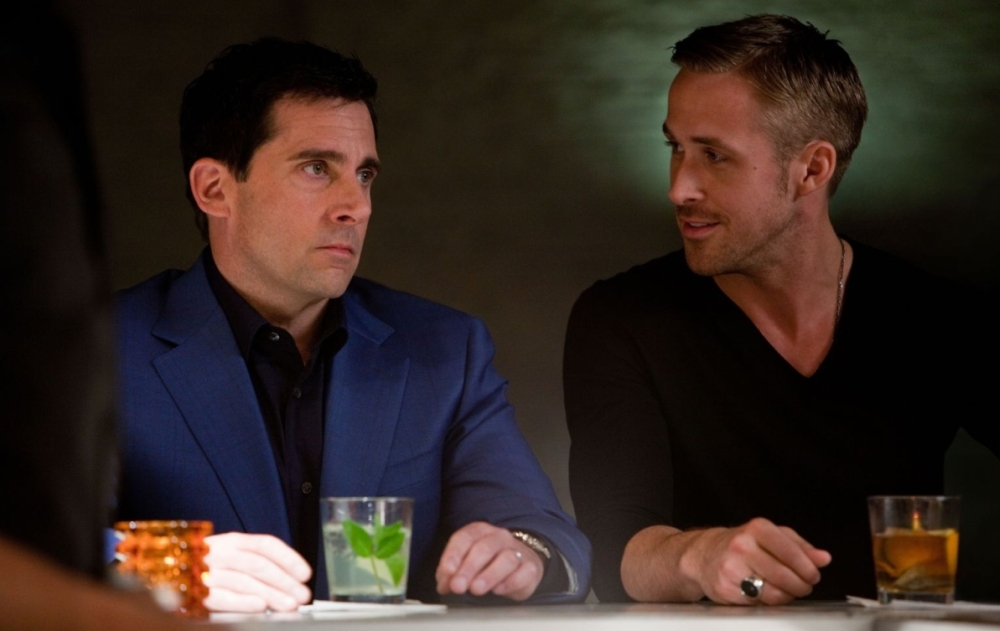 Cal (Steve Carell) and Emily (Julianne Moore) were childhood sweethearts. Twenty five years on, they have fallen into that comfortable family life that’s enough for him but not for her. When a fling with colleague David Lindhagen (Kevin Bacon) gives her a new lease of life, Emily ends an uncomfortable meal out with Cal by asking for a divorce.

As the days go by, Cal moans to the poor barman, while across the room, a too-cool-to-be-real charmer Jacob (Ryan Gosling) glides up to giggling women, sweeps them off their feet and into his apartment.

But Jacob is fed up of over-hearing Cal going on and on about David Lindhagen, so with a sympathetic altruism, he offers him some lessons on how to woo women and find himself again.

The trainers and ill-fitting blazers are replaced with snappy suits and charming chat-up techniques. Before long, the new Cal is having fun, taking woman after woman back to his bachelor pad.

He doesn’t forget his kids though, offering his son Robbie (Jonah Bobo) encouraging advice in his quest for an older woman (the babysitter), who’s rejected him because she’s in love with an anonymous older man (no prizes for guessing who). But keeping in touch with the kids, means keeping in touch with Emily and that’s making it hard for him to move on.

Jacob, meanwhile, has gone quiet on Cal. He’s shocked himself by falling for the woman who once escaped his advances (Emma Stone) when she comes to hunt him.

Unable to handle actual feelings, he now has to turn to Cal for advice.

But the tables are turned in more ways than one as this complicated web of romance starts to unweave.

This is more than a cut above the usual romantic comedies that Hollywood has to offer.

Somehow, even though there’s not much that’s too original here, it stands out as an intelligent film, as well as an entertaining one. Perhaps this is because its protagonist is thrown, unexpectedly into a mid-life crisis, rather than being too young to understand what’s really at stake, as we so often see in the genre.

Steve Carell’s understated, empathetic and fragile good egg is pushed off the wall by Julianne Moore’s unsatisfied wife, before the pieces are put back together again – but in a slightly different order – by the intense Ryan Gosling, playing against type in a comic role that fits his cool exterior as well as his broody Driver in this week’s other impressive release.

The film looks forwards as it does backwards, with kids who have a good future ahead of them, while old-timers Kevin Bacon and Marisa Tomei deliver thoroughly entertaining cameos.

Crazy Stupid Love visits familiar territory at almost every turn – from infidelity to womanising and coming of age – but it seems to provide a fresh perspective on them all, perhaps because the characters themselves are so likeable; even our hero’s perceived nemesis – David Lindhagen – eventually comes across as a charming victim of circumstance.

As well as some sharp observational character comedy, it tackles some simple issues – such as friends of a separating couple having to pick who they’re staying with and secret or not-so-secret crushes – and includes that comedic essential, the farcical “everyone ends up in the same place at the same time” scene, which is deftly handled.

There are plot points which will make you groan, but the strands are so neatly tied together and the performances are so pitch-perfect that its flaws are forgivable – even forgettable.