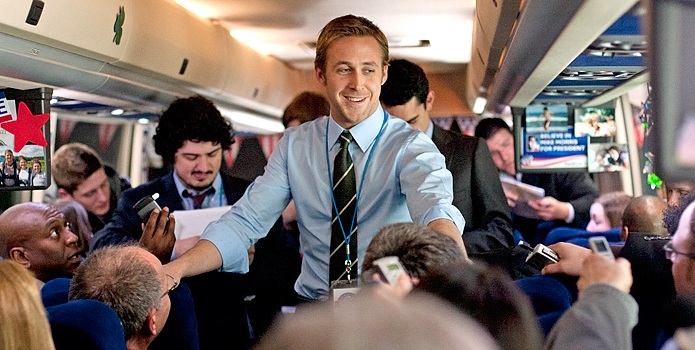 An idealistic young publicist Stephen (Ryan Gosling) is the number two in the campaign to secure the Democratic presidential nomination for Governor Mike Morris (George Clooney).
His boss Paul (Philip Seymour Hoffman) is running a tight campaign against a more left-wing candidate, Senator Ted Pullman (Michael Mantell), who’s being assisted by veteran spin-doctor Tom (Paul Giamatti).
Stephen is talented and rules the roost – he writes the speeches, organises the volunteers and only occasionally has to refer up to Paul. He even manages to find time to have a fling with one of the interns, Molly (Evan Rachel Wood).
Paul, meanwhile, is looking at the bigger picture. He’s taking the race very seriously, as he believes the sitting president is so unpopular that the race for the Democratic nomination is essentially the race for the White House. Paul’s top priority is to try to secure the backing of an influential senator (Jeffrey Wright) whose supporters would guarantee the nomination. Tom is after the same trophy.
Everything is going well for the Morris campaign until Stephen agrees to take a meeting with rival campaign director Tom behind his boss’s back.
When reporter Ida (Marisa Tomei) finds out about this meeting, it threatens to derail the Morris campaign, but Stephen knows where the skeletons are buried and he’s prepared to reveal them to protect himself – because when the brown stuff hits the proverbial fan, it’s no longer about the presidential race – it’s about his own survival.

From the moment The Ides of March begins, with Ryan Gosling’s spin doctor rehearsing George Clooney’s speech for the sound-check before a TV debate, it’s clear what we have in store – a political drama that will view both the politics and the behind-the-scenes drama with a degree of cynicism.
It’s telling that Clooney and his producing partner Grant Heslov acquired the rights to the source material just as Obama was coming to power and decided that such a comment on politics was no longer needed – but now, they see it differently.
Clooney the actor is only a bit-player for much of this film, as it concentrates on the interplay between the back-room boys – but in many of his scenes, it feels like we’re watching Clooney’s own bid for President. Governor Morris spouts what must surely be Clooney the political campaigner’s own dream presidential manifesto – the closest he will ever come to standing for President himself – he assured journalists at the London Film Festival.
At its heart, the film is a detailed and intelligent commentary on the American political system – including such peculiarities as the open primary, in which supporters of a rival party get to vote for the candidate they think their man is more likely to be able to beat.
Marisa Tomei’s interfering political journalist is also a fascinating character – one minute a friend and the next a foe.
But at its core, this is a film about ambition and loyalty – loyalty to your candidate, to your colleagues, to your bosses, to your ideals.
It’s a fascinating film, bristling with tremendous performances, but taking a step back, it falls a little flat. It’s about the primaries – selecting a candidate who might not even win the presidency – which means there’s less at stake than if we’d been following the actual Presidential election. And while there are plenty of scandals to emerge, and the source of Stephen’s troubles seems to be satisfyingly insignificant, our protagonists are more devious than they are evil and truly corrupt.
This is not a film that comments on the corruption of modern politics, because none of that comes as a surprise. The real-life Clooney has said that scandals shouldn’t necessarily rule someone out of a career in politics, suggesting that many potentially great leaders cannot shine because of an unrelated indiscretion in their past.
But if that is his point, excusing the most ambitious and power-hungry of them all, while tarring those cleaning up behind them with the loss of integrity previously reserved for the men at the top, it almost feels unfair on the underlings.
But The Ides of March is a revealing, fascinating and gripping examination of the compromises that have to be made and with both Darwin’s survival of the fittest coming to mind, as well as a couple of subtle side-swipes at god, religion is almost as much a target for Clooney as politics and spin.