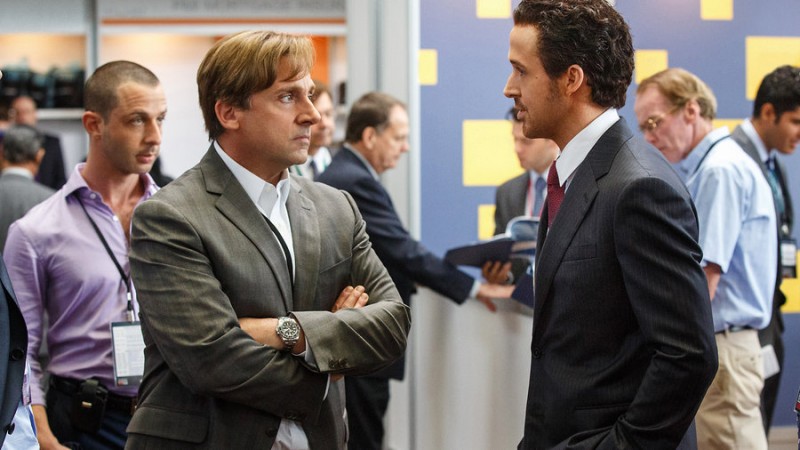 Based on Michael Lewis’s book The Big Short: Inside the Doomsday Machine, Adam McKay’s adaptation centres on a small group of men who foresaw that the housing and credit bubble would burst and took on the banks by betting against the housing market and the US economy.

When the inevitable collapse happened, they made a killing.

Nominated for five Oscars and five BAFTAs, this satirical comedy drama is one of the most astute and entertaining assessments of the US financial crisis of 2008 from no less than the director of the Anchorman films Adam McKay.

Shot in a documentary style, with Ryan Gosling acting as a narrator turned protagonist, it provides an idiots’ guide to the crash and how it was instigated.

Christian Bale plays real life hedge fund manager Michael Burry who in 2005 analysed the stats and realised the housing market would collapse in 2007 because it was being propped up by bad loans, so he decided to short it.

Directed and co-written by McKay, this is an intelligent, riveting fast paced drama infused with scathing humour, which takes you down the rabbit hole of subprime loans, tranches, credit default swaps and CDOs (collaterised debt obligations). Yes you need to be a banker or finance expert to truly comprehend these and keep up with who is doing what to whom.

This is despite famous people popping up to explain the terminology in layman’s speak such as Margot Robbie spelling out subprime loans while appearing gratuitously in a bubble bath, downing champagne.

The film captures perfectly the greed and avarice of the US banking world along with its sheer arrogance.  The protagonists, who are played superbly by the elite stellar cast, are just as guilty and as ruthless, despite attempts not to demonise them.  Burry is portrayed as someone with autistic-like traits who is only interested in analysing the numbers; Pitt’s Ben Rickert is a disillusioned former banker who reluctantly comes out of retirement to help two young investors Charlie Geller (John Magaro) and Jamie Shipley (Finn Wittrock)  to pull off the trades of their lives and he does it from a pub in Exmouth; while Carell’s Mark Baum is a man with anger management issues, who hates his  job and is horrified by the shock realisation that the melt down of the housing market could lead to the collapse of the US economy. Yet he does nothing to raise the alarm with the powers that be. It is only Geller and Shipley who attempt to alert the press to what is going on, only to be shot down.

Despite their so-called misgivings, they all made millions from the greedy bankers’ shortsightedness while eight million people lost their jobs and six million their homes in the USA alone.

Of course no one was prosecuted over the financial crisis and the banks were bailed out by the US government. Baum makes a telling observation at the end that the bankers knew they would be saved by the taxpayer.  They weren’t being stupid they just didn’t care.

It is a thought-provoking film which requires every ounce of concentration to keep up with the action and the players.

It is a film which benefits from being seen more than once.