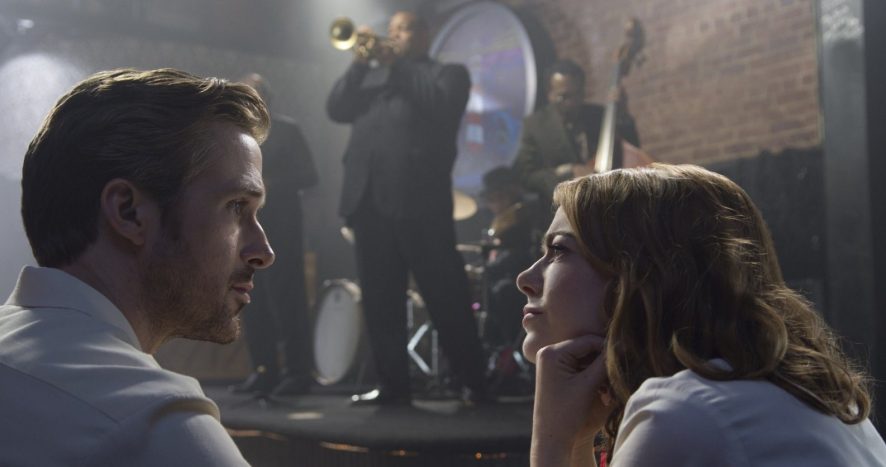 In modern-day Los Angeles, aspiring actress Mia (Emma Stone) and budding jazz musician Sebastian (Ryan Gosling) meet in a traffic jam – and again in a restaurant – and again at a party. Everywhere they go, they keep bumping into each other; even if they have no desire to see each other, the City of Angels has other ideas. LA wants these two to be together.

After a song-and-dance routine or two, the pair give in to the forces of nature and start dating; together, they encourage each other’s creative endeavours as they strive against the odds – and the competition – to achieve their own dreams; hers to become a Hollywood star, his to own his own jazz club.

But with the pressures of the entertainment industry pulling the pair in opposite directions and both struggling to balance their principles with potential success, keeping relationships – and dreams – alive in La La Land isn’t easy.

Fresh from his success with the exhilarating Whiplash, Damien Chazelle is back with another musical masterpiece, but this time, rather than simply making a film about music and musicians, he’s gone the whole way and made a full-on musical, that harks back to Hollywood’s Golden Years.

La La Land is the first original Hollywood musical for decades – with most recent examples of the genre being adaptations of stage musicals, including Les Miserables,  The Producers or Sweeney Todd, or using existing songs, such as Moulin Rouge – and as such, it’s a bold move from the studio system – and from Chazelle – so much so that even though he’d written this before Whiplash, he needed to prove himself with his debut film before anyone would throw big bucks – and stars – his way to get it made.

Part homage, part parody, part pastiche, some of the songs are integral to the narrative, others fit in seamlessly, while others are joyous distractions as they take you into a fantasy world that exists only in the kind of films where emotions are truly expressed through music.

La La Land is intricately constructed, ensuring that a traditional 1940s-style musical feels comfortable within a modern-day setting, and the story allows Chazelle to use a variety of musical genres, from the big set-piece song-and-dance numbers you might expect to Sebastian’s intimate jazz and even the soulful pop of John Legend – one of the film’s co-stars and executive producers.

As well as varying the musical styles, Chazelle also plays with many of the tools that cinema has to offer, employing some theatrical staging and unconventional editing, without it feeling out of place.

Chazelle is clearly passionate about the movie musical and draws heavily on the genre’s history, but if this was truly an homage – or indeed an attempt to make a serious musical in its own right – he would have cast singers, dancers and musicians rather than actors who get by. Ryan Gosling and Emma Stone spent months of pre-production learning to dance – and in his case, play the piano from scratch. Their efforts have paid off in spades, but musically, their performances could have been bettered by professionals – which makes La La Land feel more like pastiche than homage.

But it’s clear that Chazelle is more passionate about music – and jazz in particular – than he is about movies; the film-makers we meet are largely loathsome, while every musician we encounter is a creative force for good.

While the production values can’t be faulted, one could quibble with handful of plot points, but it’s a musical – people don’t usually just break out into song, so if you can accept that as a premise, you’ve probably already inhabited the fantasy world in which one of LA’s top tourist attractions is inexplicably open (only to the protagonists, as it turns out) after hours or characters coincidentally happen to be exactly where the plot requires them to be at any given time. There are moments when you might not believe what characters do or say, although the unexpected destination of their journeys is convincing in both its bitter-sweet sentiment and the creative, heart-warming and aspirational way in which it’s presented.

In many ways, this is to the musical as The Artist was to silent films; a more than competent revisiting of a bygone era, rather than heralding anything new for the future of cinema. The film will certainly be enjoyed for years, and you may well be humming some of the songs as you leave the cinema, but it’s unlikely that the numbers will become musical classics, like the compositions of Rodgers and Hammerstein, Leonard Bernstein or Lionel Bart, for example. La La Land empowers the musical, rather than revives it.

There won’t be many people who’ll be able to resist the allure of a film whose themes will ensure that it resonates with most audiences, using music to deliver an uplifting story that touches on perhaps the two subjects most integral to everyone’s lives – love and dreams.

La La Land doesn’t particularly have much new to say, making the story feel oddly inconsequential, although its conclusion does have an ironic sense of realism to it. And, ultimately, does it even matter if you’re not being intellectually challenged if you leave the cinema feeling so emotionally enriched?

It’s a film where most viewers will happily dismiss any quirks, because its charming performances, dream-like qualities, mellifluous music and choreography just add to its nostalgic air of romance and the truly joyful and magical experience it provides.