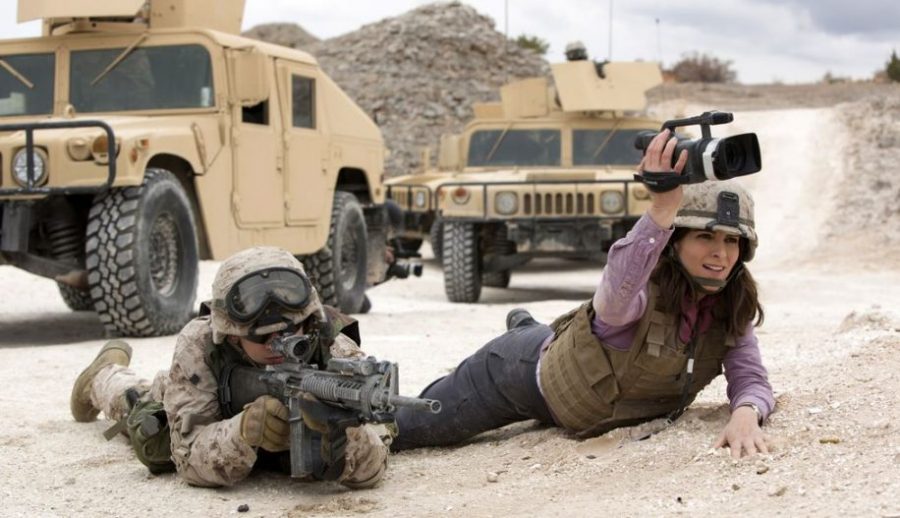 Used to writing boring domestic stories for the news anchors from the comfort of a desk in the newsroom, being sent to report on a war zone is literally a baptism of gunfire – and it’s not just the work that takes her out of her comfort zone – it’s the close-knit community of foreign correspondents who live, breathe and work from the same secure house in Kabul.

One of them, successful correspondent Tanya (Margot Robbie) takes her aside on her arrival to inform her that she’s delighted to have another woman in the house – and to explain the importance of sex to keeping your sanity in a claustrophobic war-zone, not least because skyping loved ones back home on a poor internet connection is not the best way to maintain a relationship. That being the case, though, she warns Kim against getting to close to the sleazy Scottish photographer, Iain (Martin Freeman).

As the months go by, Kim starts to become addicted to the danger and the thrill of war reporting, taking on more and more risky stories – but as it turns out, with audiences back home getting tired of hearing about Afghanistan, she needs bigger stories to get on air anyway.

As the years go by, friendships blossom, rivalries develop, lives are lost and hearts are broken in this adaptation of the memoirs of the war correspondent Kim Barker.

Did you spot it? In the adaptation of the life of Kim Barker, the main character is called Kim Baker. A sign from the outset that it’s not necessarily an accurate, blow-by-blow account of the real-life newspaper journalist’s story.

But artistic licence is allowed if it means making the story more cinematic and TV journalism arguably makes better pictures. Other changes have been made to the locations, the personalities and the timing – among other things – but Kim Barker’s memoirs are not Shakespeare and the journalist herself is content to see her own story moulded to fit the screen.

So if audiences won’t mind a few liberties being taken with the truth, does Kim Baker’s story work in its own right?

The big problem throughout the film is its uneven mood – chiefly, it really can’t decide what it’s trying to be. Despite what you might think if you’ve seen the trailer, this is not a comedy. Just because it stars Tina Fey, with support from Martin Freeman and Alfred Molina doing an Afghan accent in a funny beard and wig, this is not a comedy.

It certainly feels like this is Tina Fey hoping to announce to the world “I can do drama too!” But trying to present itself as a tough exploration of the trials and tribulations of life in a war-zone is difficult when the lead actress is so deeply associated with comedy that your body wants to laugh at everything that comes out of her mouth and then gets disappointed when its not even meant to be funny. It has intentionally comic moments – many of which do work, but most of which seem out of place in this film.

Other films have tried to wring comedy out of war with more success, chiefly because their humour has been tinged with satire – Three Kings springs to mind. The comedy here feels a little too straight-forward and ill-fitting.

It also tries to sell itself as a romance, but here again, it works only to point, before characters start behaving in a way that just doesn’t feel right – in particular, a fictional character who was created for the film, as it happens. And this isn’t the only place where the narrative is let down by unconvincing embellishments.

There are elements that ring true – the no-nonsense army personnel who allow Kim to embed with them on dangerous missions, led by Billy Bob Thornton as a commander who’s a peculiar blend of ruthless and empathetic – the camaraderie of the rival reporters – the addiction to danger – the corruption of power.

But the overall sense that you’re left with is confusion. What have I just watched? And why?

The title doesn’t particularly help either. Some people won’t realise that Whiskey Tango Foxtrot is military-speak for the letters WTF, more commonly used by civilians to mean “What The you-know-what!” And those who do know this will wonder what its relevance is to the plot – WTF, Kim starts off as a fish-out-of-water but soon settles down, enjoys it, prioritises it over her relationship back home, falls for someone else and goes where the job takes her – what’s WTF about that? It’s been seen before and it’s exactly the character arc you’d expect.

Then there’s another interesting talking point, which doesn’t particularly affect one’s enjoyment of the film, but is worth noting. Coming out just three months after the “Oscar So White” controversy, its interesting that the Academy responded partly by trying to improve its own diversity by boosting its female membership – while here we have one of an increasing number of films led by a woman. But the two main Afghan characters – a politician (Alfred Molina) and a guide (Christopher Abbott) – are played by caucasians. They both do well enough – Abbott is particularly convincing – but while it’s true that there aren’t a large number of Afghan actors to choose from in Hollywood, Abbott is not such a huge name that it was worth creating controversy by casting him to draw in audiences. If films are about the quality of the acting, of course the ethnicity of the actors shouldn’t matter, but the powers that be in Hollywood have decided that political correctness is as important – if not moreso – than artistic merit.

I am, though, not reviewing the political correctness of this film’s production process – others will. But what ends up on screen is sadly just a little bit messy and however much you feel you want to like it – and Fey herself is certainly likable – it is likely to leave you feeling just a little short-changed. Tina Fey in a war film? Whiskey Tango Foxtrot! Tina Fey in a film that’s not that funny? WTF!

Oh – and it also commits one of the greatest crimes of cinema narrative – starting with an event before flashing back and catching up to that event – when nothing is added to the telling of the story to know what’s coming up later.