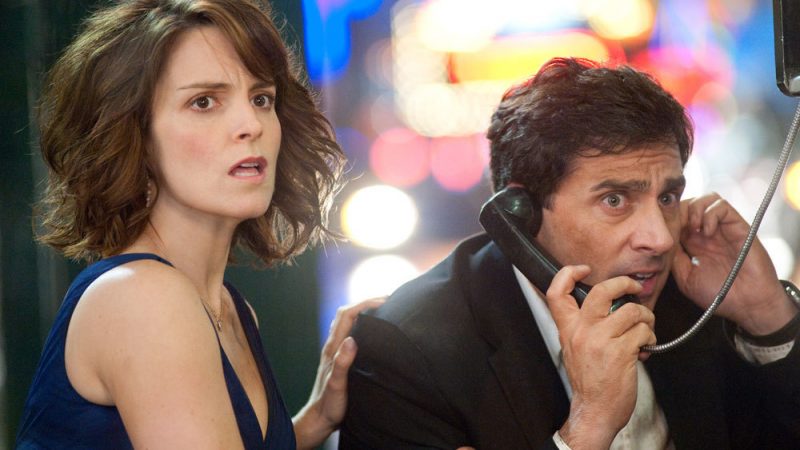 Phil (Steve Carell) and Claire (Tina Fey) are a typical suburban couple, just about managing to keep their head above water as they struggle to get their kids to school on time and to bed on time.

But however hard they try, by the time the children get to sleep, Phil and Claire are too tired to do anything more than breath and collapse on the sofa.

To give their lives some semblance of humanity, they join a book club, but of course they don’t have time to read the books. Their only escape is their weekly date-night, when a babysitter looks after the children to give them a chance to have a grown-up night out together – but they’re usually far too tired to enjoy it.

When Phil comes home from work one day and finds Claire dressed up to the nines, reinvigorated, he resolves to take her to the hottest new seafood place in Manhattan – but of course, they have no reservation, so the maître d’ sits them at the bar to wait for an opening.

When no-one answers the call for the Tripplehorns’ table, Phil shrugs his shoulders, puts his hand up and takes their reservation.

It’s a perfect “date night” – in a perfect restaurant – with perfect company. Nothing can go wrong – until two heavies turn up at their table, thinking they’re the Tripplehorns. The heavies drag them out into a back alley, where – at gunpoint – they demand the flash drive.

What flash drive? They obviously don’t have a clue. But if they’re to survive, they need to run with it and find out who wants what fast.

Corrupt cops, blackmail, sleazy politicians, buff former clients, car chases and crashes, guns and strip-clubs are just some of the unexpected obstacles thrown into the mix, to add some unexpected spice to what was meant to be just another “date night.”

Taking the lead actors from two of America’s most popular sitcoms – Tina Fey from 30 Rock and Steve Carrell from the American Office – this was either going to be a remarkable success or a tremendous disappointment.

The critics are divided, but this critic found it to be a fresh, breezy ride, bursting with excitement, surprises and some fantastic visual and verbal gags.

There are two films here – the first is a gentle family comedy about a busy couple, struggling to forge a life worth living against a backdrop of a demanding work schedule and demanding kids – the second is a fish-out-of-water action comedy. In both, two of America’s top comic talents bounce of each other with convincing ease – either of them would be confidence enough to command the screen alone, yet they work tremendously well together.

This is not a film that should be taken too seriously – up to a point, the story works, but once it starts to unroll into a corruption-laden crime caper that would give the Die Hard films a run for their money, it becomes increasingly contrived – but it never takes itself too seriously and the warmth of the actors wins you round.

For couples dragged down by their children, the hope of the escape and the excitement of the adventure could well invigorate a depressingly dull and repetitive existence.

Ultimately, this is silly, mindless entertainment – but it is entertaining. It’s slick, pacy, exhilarating and exhausting – but most importantly, it’s witty and fun, at less than an hour and a half, it doesn’t outstay its welcome, it’s an original twist on two genres and a rare film that lives up to expectations.