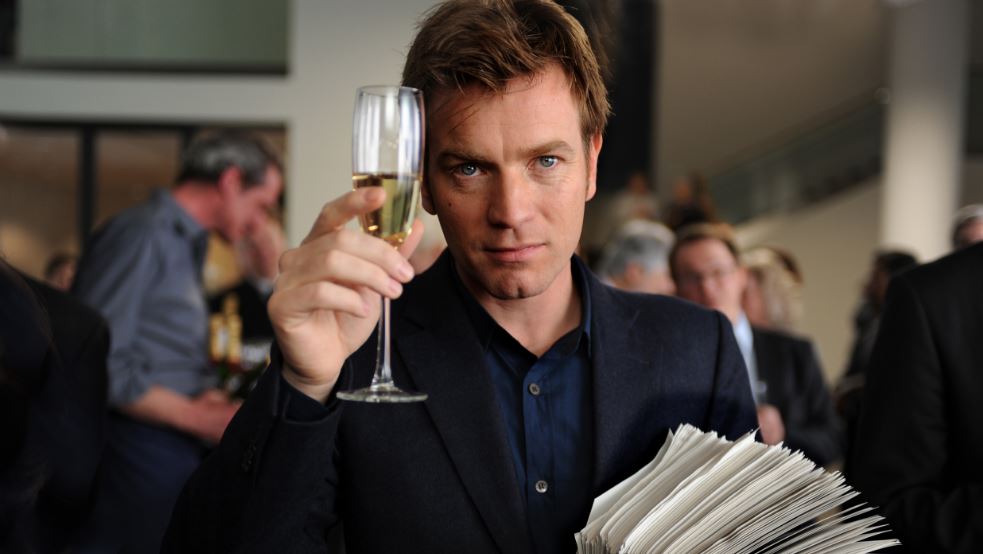 Controversial former Prime Minister Adam Lang (Pierce Brosnan) has retired to a huge estate on a remote American island. His tenure at Downing Street is largely remembered for a war he led Britain into and allegations that he assisted the US in the torture of terrorism suspects – allegations that have the United Nations war-crimes investigators sniffing around. No clues which former friend Robert Harris based this character on!

When one of his closest aides dies mysteriously, while writing his memoirs into an “autobiography,” the publishers hire a new ghost-writer (Ewan McGregor) and send him to the US to finish the job.

No-one was really happy with the first draft anyway, so The Ghost is invited to spend some time with Lang, his flirtatious wife Ruth (Olivia Williams) and his loyal and devoted personal assistant Amelia (Kim Cattrall) to get a better understanding of Lang, the man, before writing his “autobiography.”

His starting point is the first draft, but when he starts digging around in the original research material, he finds photos and documents which don’t quite add up. Something is not quite right – so not quite right that he believes it could even have something to do with his predecessor’s death.

Everything seems to be pointing to Lang having been in the pocket of the US government – a secret he’d need to keep hidden at any cost.

But in the murky world of politics and international relations, nothing is ever as simple as it looks.

There are a handful of directors whose names carry such weight that news of a new film causes every sinew of your body to shudder with excitement.

Particularly in the light of his current legal problems, the arrival of a new film from Polanski brings with it such anticipation.

On many levels, it lives up to expectations. But ultimately, it’s somewhat of a disappointment.

It’s beautifully shot and unfolds at a brisk pace, through pithy and witty dialogue. Most of the characters feel real – from Tony Blair…erm, sorry, Adam Lang through to the naïve Ghost writer who has to learn to stand on his own two feet very quickly in order to survive in the world where he’s been thrust, way out of his depth.

Both Pierce Brosnan and Ewan McGregor fizz in these roles. But as with many such conspiracy thrillers, when you know, as a viewer, that reality can’t be as simple as it seems on the surface, you can’t really take most of the supporting characters at face value. You know that everyone has an agenda, but it just takes a while to work out what it is.

Some strands of the story work, but others seem rather contrived. Some characters convince but others feel like the kind of archetypes found only in the pages of a spy novel.

As a former friend of Tony Blair, Robert Harris is clearly in a position to know about many of the secrets he purports to tell, yet many of the twists and turns still seem beyond belief. And while Tony Blair was certainly implicated in such controversies as extraordinary rendition – as happens in this film – no-one has for one minute suggested he was a CIA spy, which raises the question of to what extent this is meant to be an expose and to what extent it is simply a fiction.

And if it’s meant to be a fiction, the allegations could have been grander, making the stakes higher – or at least more appropriate. A prime minister who spied for our enemies would have had more impact.

I’m sure that scholars of the intelligence services might find this to be a naïve observation, but one major problem is that in many such thrillers, we see Americans spying for the Russians, British people selling secrets to the Germans or Iraqis providing the allies with intelligence. But here, the allegations at the heart of the plot are that a former British prime minister had been working closely with his closest international ally, which somehow doesn’t feel so scandalous that everyone who finds out should live in fear of meeting an horrific end. And even if it really is beyond the pale that a British prime minister should draw up policies that suit America, we’re talking about a man who’s long since out of office and no longer wields any power outside his own home. And even there, the suggestion is that he probably doesn’t even wear the trousers in his own marriage.

The film is enjoyable and admirable as the plot unwinds with Hitchcockian authority, but it’s neither as deep nor as clever as it sets out to be.

And satisfying as it is while you’re watching it, The Ghost’s biggest crime becomes apparent only after the denouement has been revealed, since it undoes most of the good work that preceded it. The ending doesn’t fit with the film we’ve been watching, leaving more questions than it answers, but in a way where you feel you’ve caught the writers out rather than the other way around.