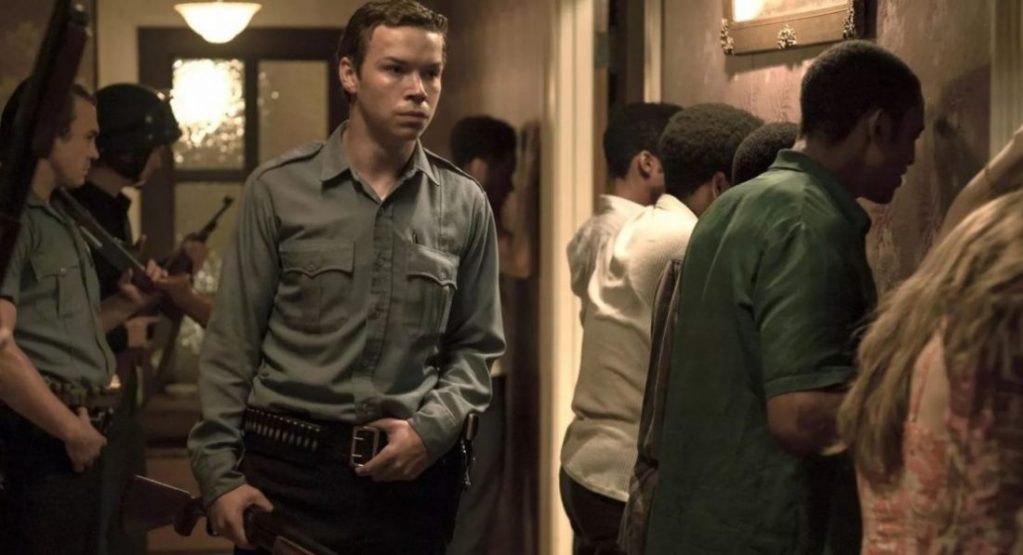 It’s July 1967 and racial tension is boiling over in a part of Detroit where most residents are black, but most police officers are white.

After police raid an unlicensed club, the anger on the streets erupts into rioting, which prompts the state governor to put the National Guard – and their tanks – onto the streets, to try to retain order.

When a group of young police officers, led by Krauss (Will Poulter) get reports of a sniper, firing from the Algiers motel, they head in to try to search for the gunman. The National Guard aren’t far behind them.

Alternately staying – visiting – and hiding in the motel are a group of young people including two members of an aspiring Motown-style band (Algee Smith and Jacob Latimore), a recently-returned Vietnam veteran (Anthony Mackie) and a group of friends comprising two black men and two white girls.

As the police round up the guests, Krauss demands to know who fired the gun and grows increasingly frustrated, as no-one provides him with any information.

Dismukes (John  Boyega), who’s working his second job as a security guard, trying to protect a local store from rioters, crosses the road to find out what all the kerfuffle is and soon finds himself observing the events – to the point of helping the police search for the weapon, while distancing himself from their evident abuse of their authority.

Krauss lines up the group, facing a wall in a corridor, and one-by-one, he or his colleagues lead them off to a room where he demands the same information at gunpoint.

The desperation of the police translates into a brutality that they believe simply can’t fail to turn up their suspect – but still they resist.

As their actions reach the point of no return, Krauss starts to worry that he and his fellow officers could end up being prosecuted themselves – for murder – so he tries to strike a deal with his victims; if they promise to stay quiet, he’ll let them go.

But in this climate, even the Detroit Police aren’t prepared to protect rogue officers so Krauss and his colleagues find themselves before a jury – an all-white jury – alongside Dismukes. If the black population can’t trust the actions of their white police officers, what chance of justice with an all-white jury?

Based on real events that unfolded at Detroit’s Algiers Motel during the 1967 riots, this feel seems frighteningly relevant as this historical outrage is given added potency by everything from continuing stories about American police officers killing black men to President Trump’s handling of the recent white supremacist rally.

It’s a film with fifty year old lessons to learn – that have not yet been learnt – or at the very least, might find a bit of a refresher course useful.

As you’d expect from The Hurt Locker and Zero Dark Thirty pairing of director Kathryn Bigelow and writer Mark Boal, this is a taut, well-told, powerful story, highlighting a significant moment in America’s long-running civil-rights fight that many on the UK side of the Atlantic won’t be familiar with.

But the film does take rather too long to get to the crux of the story as it spends perhaps a little too much time building up the characters before their fate collides – as if we won’t care that a white police officer is brutalising an innocent black bystander unless we know that the innocent black bystander was on the cusp of a Motown contract before he became caught up in this nightmare.

In fact, the film is so clearly defined – scene set-up, character set-up, bring the main cast together for one big confrontation, a court case to explore the aftermath – that it’s almost surprising they didn’t use chapter headings to ram the point home.

The stand-out characters are Will Poulter’s police officer and John Boyega’s security guard – two British actors showing their American counterparts how to do their jobs. The usually meek and mild Poulter is frighteningly convincing as a beast in blue, as Krauss, sweet, naive and innocent on the outside, turns out to have vicious streak beneath the surface – driven by determination to catch a criminal at all costs – a survival instinct – or perhaps just a hatred of black people. And Boyega’s Dismukes quietly represents the audience as we observe the police action with disdain, unable to do anything about it. And where his character is taken in the third act is shocking, as this shameful episode for American justice draws to its conclusion.

Detroit could certainly have been shorter and a handful of moments don’t feel convincing enough – not least the way the racist police seem to be perfectly happy to have a black security guard on their side – it’s like they’re more interested in the uniform than the skin-colour. But the outcome of the trial gives unexpected pause for thought.

The latest undoubtedly butch  and certainly important film from the only woman to have won the Best Director Oscar is a skilful and thought-provoking telling of events which still resonate – or perhaps resonate again – half a century after they took place but there are a few too many moments of cinematic hyperbole and a little too much feels contrived or manufactured.