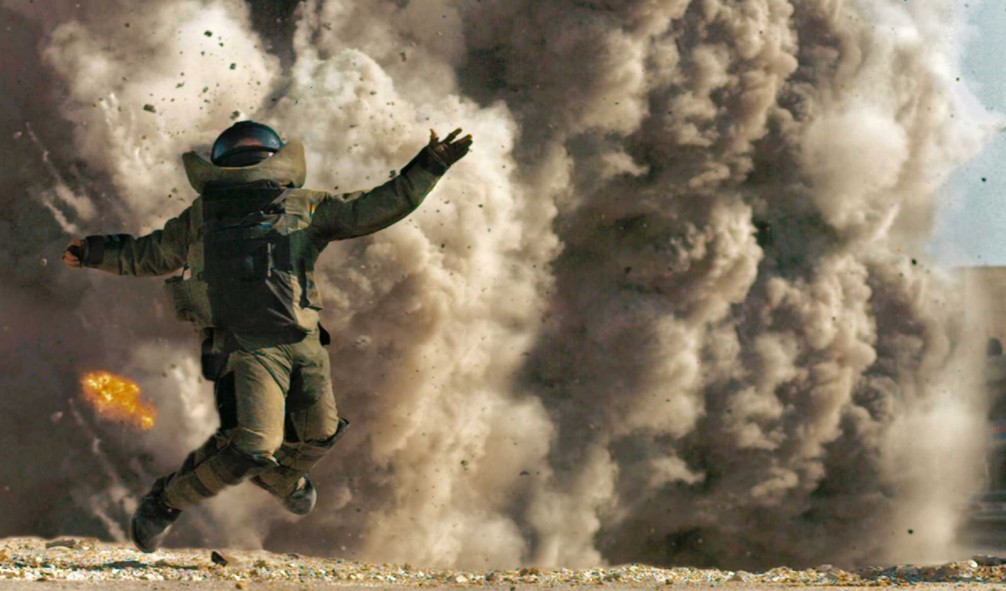 Sergeant Will James (Jeremy Renner) arrives in Baghdad to take charge of a bomb-disposal unit, working with Bravo Company towards the end of its tour of duty in Iraq, in December 2004.

As is required on the big screen, as much drama comes from his personality clashes with his comrades as from any clashes with Iraqi insurgents, so the metal-head adrenaline-junkie finds himself working alongside by-the-book Sergeant Sanborn (Anthony Mackie) and nervous newcomer, Specialist Eldridge (Brian Geraghty).

At every turn, James determines to keep the others on their toes, making them spend most of their time wondering whose side he’s on. In so-doing, he’s putting his own safety at risk – but that, after all, seems to be his raison d’être.

The film follows the trio as the days tick away to the end of their tour, going from bomb to bomb, via stand-offs with insurgent snipers.

OK, I’ll say it now, just to get it out of the way. Perhaps the most macho film of the year – maybe even the decade – has been directed by a woman. Get over it. Near Dark, Point Break, Strange Days, K-19: The Widowmaker – this is not a woman who chooses chick-flicks to reach her audience – she makes butch films. So what? Most men wouldn’t be butch enough to direct this.

Story-wise, there’s not much to this – they get called to a bomb, they diffuse the bomb, they move onto the next bomb – repeat until tour of duty ends.

This film is not so much about the horrors of war, because the central character is clearly in his element – for him, the spectre of death is not a horror, but a power-source.

But the tension between the characters is more than matched by the unbearable tension of watching James, spanner between his teeth, as he rips off his bomb-suit to fiddle around under the bonnet of a car that’s been wired with enough explosives to blow up a small country.

But despite the thrill of James’s encounters with the improvised explosive devices, it’s the encounter with distant snipers which ratchets the tension up to its almost unbearable maximum.

Bigelow was keen to use relative unknowns in the lead roles, as she felt it would amplify the suspense – but in true cinematic style, you only have to glance at your watch and see that only half an hour has passed to know that your guy is going to make it on this occasion – or do you?

It does feel like there’s something missing from the film – we witness the present-day camaraderie of the characters, but have very little sense of who they really are, what really motivates them.

And one thing that seems to be missing in a narrative sense – when we hear about British soldiers being blown up in Afghanistan – is the sudden, unexpected explosions – here, it’s just the team being called to known devices.

The writer, Mark Boal, spent some time as a journalist, embedded with a bomb disposal unit. He says these guys are five times more likely to be killed in action than regular soldiers, but while you get a sense of how most soldiers must feel when fighting such an unpredictable guerilla war, James’s lack of fear seems removed enough from reality to make him more of a movie-myth than a real man.

Despite – or perhaps because of – his own experiences on the front-line, Boal – who also produced – was keen for the wounds to be less graphic than in reality. For him, the narrative had priority over authenticity, which is perhaps ironic, the way it turned out. Not that this is a bad thing.

Shot in parts of the Jordanian capital Amman, picked to mimic areas of Baghdad, with Iraqis flown in to play extras and minor roles, the scenarios feel as authentic as they can to anyone who’s never seen the theatre of war up-close. At times, the actors weren’t even told what was going to happen to them, to add to the sense of unpredictability and urgency. Shooting with four cameras simultaneously increases the documentary feel.

Bigelow shot on a low-budget, using independently-raised money, to ensure that she had no creative interference. Her stated aim was to be both entertaining and journalistic – goals she achieved. Realism was also very important to her. Another box ticked.

But the film’s main failing is a lack of real character development – but maybe that’s the point – it’s a slice of life – very specific to the time and place, says Boal, insisting that he has no message about the NATO troops currently being killed by similar IEDs in Afghanistan.