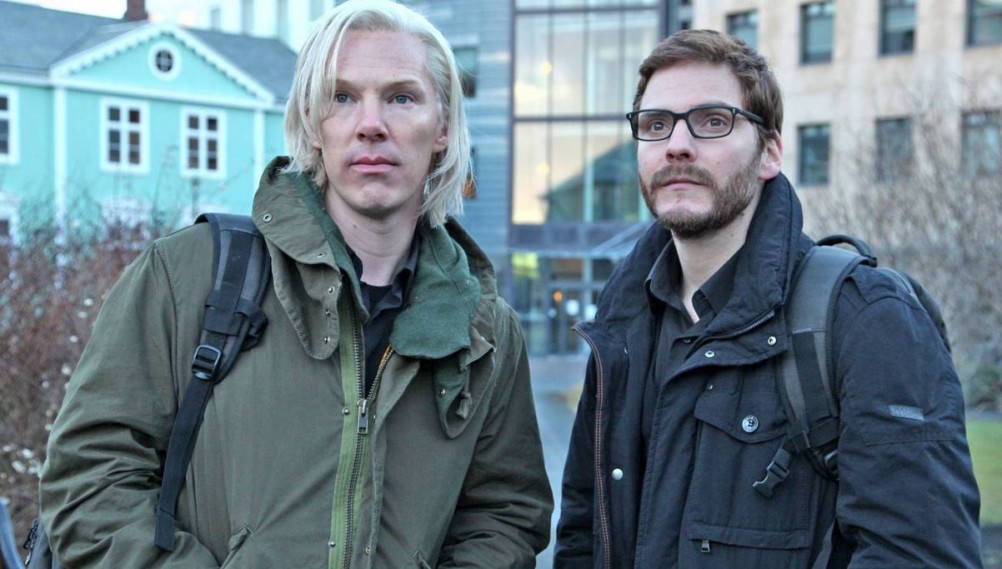 In 2007, a little-known Australian computer hacker, Julian Assange (Benedict Cumberbatch) arrives at a computer geek fair in Berlin, expecting to make a speech about his new website WikiLeaks, but all the rooms are booked.

Overhearing his frustration, a local hacker, Daniel Domscheit-Berg (Daniel Brühl), comes to his aid and secures the main hall, while preparations are under way for a bigger event. During the hours that follow, Julian tells Daniel about why he wants to provide a platform for whistleblowers to leak secrets anonymously and Daniel explains why he wants to help him.

With Daniel’s help, financial and otherwise, Julian grows the website and starts to score bigger and bigger victories, publishing the names and addresses of British National Party members, toppling Iceland’s biggest bank and, most famously, striking a deal for sympathetic newspapers across the world to publish details of sensitive information about American military operations and the content of diplomatic cables.

As the targets grow in prominence, WikiLeaks grows in notoriety and the glory starts to go to Julian’s head. While Daniel can see that the publication of the details of informants and spies could put their lives at risk, Julian is determined to publish every last detail, insistent that it’s not up to him to censor the facts.

Tension grows between the pair as ideology and pragmatism clash, but when the point comes that they can’t work with each other anymore, Daniel can’t let go, as he’s worried about the damage Julian might do on his own.

How fitting that this film is released in a week that the Guardian – the British paper at the heart of the WikiLeaks story – has been criticised by the head of MI5 for publishing more leaked details – this time from the former NSA analyst Edward Snowden.

Interestingly, Alex Gibney’s recent documentary about the same period of the life of the WikiLeaks website, We Steal Secrets, came out just as Snowden sought refuge from the US government in Moscow.

With just three months between the two films, they make interesting companions – and it’s notable that the man at the centre of The Fifth Estate, and on whose book it was based – Daniel Berg (as he abbreviates his name) – was one of the main contributors to Gibney’s documentary. Consequently, much of the source material is the same – and what isn’t appears to be consistent; the portrayal here of the Guardian journalist Nick Davies is very much along the lines of what Davies himself told Gibney.

Where the stories differ is that Gibney spent a lot more time looking into the story of how WikiLeaks obtained hundreds of thousands of leaked documents – from the recently jailed Bradley Manning, or as he now styles himself, Chelsea. Condon, by contrast, barely mentions Manning, but gives rather too much screen time to the consequences of his leak among senior officials in the White House and the State Department – seemingly as an excuse to boost the film’s box office prospects by giving unnecessarily prominent roles for Laura Linney and Stanley Tucci.

Based on Domscheit-Berg’s book, the film is very much told from his point of view – the point of view of someone who fell out with Assange – which prompted the website’s founder to reject the film long before he would have had a chance to see it and long before the man who was to play him, Benedict Cumberbatch, wrote to him to request a meeting.

Despite Assange’s refusal, Cumberbatch delivers a convincing portrayal of an apparent idealist turned megalomaniac. Off the back of playing Niki Lauda in Rush, Daniel Brühl delivers another confident performance of a lesser-known real-life character.

This is a complex story, with a lot of individuals, across the world, with contrasting and contsantly changing motives – and Condon tells it clearly and successfully builds tension in a way you might think difficult, when essentially, it’s a film about people who sit at computers.

The film was exciting and revealing, but seemed to dwell too much in some of the less interesting areas and glossed over parts of the story that felt more interesting – but people who haven’t seen Gibney’s documentary might find this less problematic, as they won’t know what they’re missing.

Slightly odd is a closing titles coda, featuring Julian Assange, sitting in his current home – the Ecuadorian Embassy – explaining why he disapproves of the film. Odd, because it’s not Julian Assange, but Benedict Cumberbatch, playing Assange. It feels somewhat incongruous, out of the context of the original narrative. If this is really what Assange has said, at this point, it would make sense to see him – not another dramatisation.