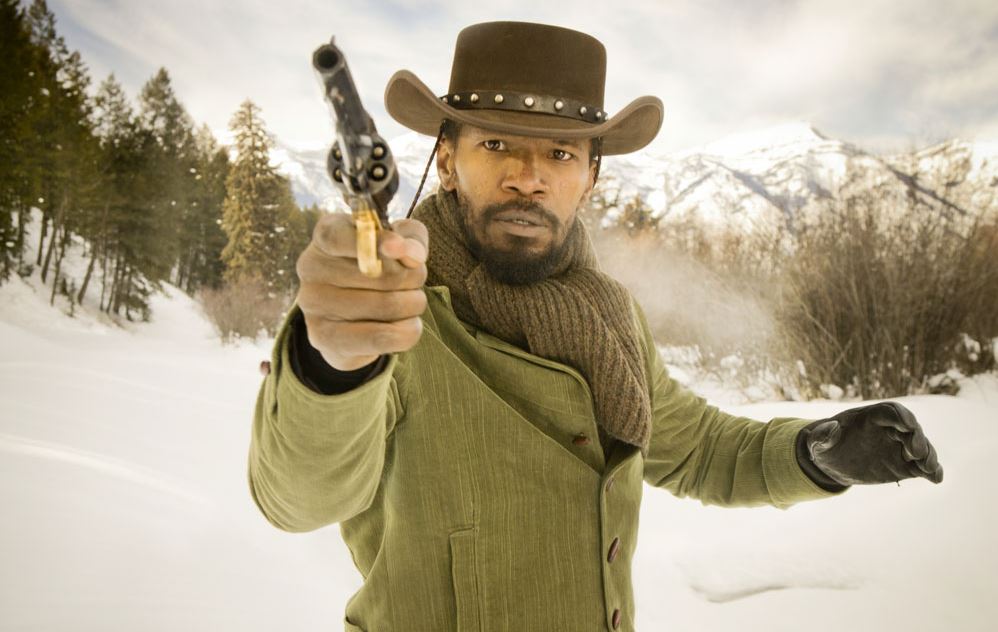 In the late 1850s, a group of slaves, being transported – in chains – through Texas, are intercepted by an immigrant dentist turned bounty hunter, Dr Shultz (Christoph Waltz).

He’s looking for one in particular, Django (Jamie Foxx), who will be able to point him in the direction of three brothers he is searching for.

After securing Django’s freedom, rather more bloodily than he might have liked, Schultz offers him his freedom – but only when he has helped him to find his bounty.

By then, the pair have developed a bond, and Schultz agrees to help Django’s find his wife, Broomhilda (Kerry Washington), and secure her freedom from a ruthless plantation owner, Calvin Candie (Leonardo DiCaprio).

There’s no two ways about this; almost any film by Quentin Tarantino can, these days, be reviewed thus: thoroughly entertaining, but far too long.

From the Kill Bills, through Inglourious Basterds to Django Unchained, he comes up with a perfectly interesting idea – often based on earlier cultural references, of course – but while he packs it full of snappy dialogue, exemplary performances and unbeatable action sequences, he simply doesn’t know when to stop.

Some scenes just go on and on, others seem superfluous in their entirety.

That’s not to say they don’t have merit; many remain highly entertaining, regardless of their necessity to the narrative; while there’s not a moment here that would not have brightened up a lesser film, there’s a tremendous 90 minute movie trying to burst out of Django Unchained, smothered by another 75 minutes of fat.

While Jamie Foxx is effective enough as the lead, it’s the better written supporting characters that give actors including Leonardo DiCaprio and Christoph Waltz a chance to jump off the screen and onto an awards shortlist.

One narrative difficulty with the film is that while he plays an odious slave owner, DiCaprio doesn’t seem hateful enough for him to deserve the fate the plot necessitates. It’s more likely to be that the actor is just too charming than that he fails to come across as evil enough. In the context of the time, the fact of being a slave owner was not so unusually heinous that a violent death was the only justified ending.

The violence itself cannot go without a mention – it’s Tarantino, of course. But as with his previous films, while the sets are liberally decorated with blood, the violence is clearly – intentionally and humorously – comic-book, which makes it easier to take and harder to blame real-life shootings on.

Another sign of how Tarantino needs to be reigned in is his decision to take on a supporting role again, for the first time in a while. His main problem is that he seems to have too much power – no-one has the guts, or the authority, to tell him where to cut, what to lose. Until he learns how to use the delete button (the modern equivalent of the razor blade, perhaps?), he will continue to make entertaining films, but they’ll be far from the masterpieces he used to produce.