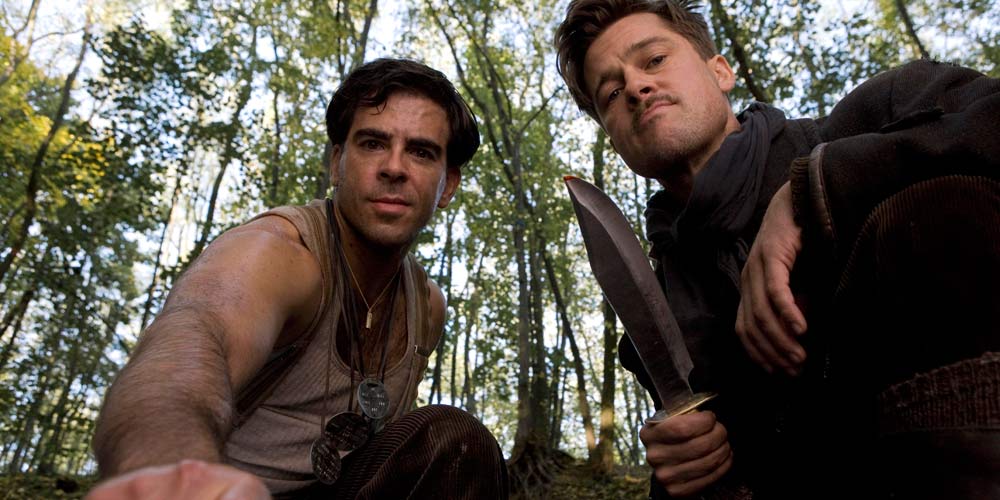 The Second World War is in full swing.

Colonel Hans Landa‘s (Christoph Waltz) reputation precedes him. Not for nothing is he known as “The Jew Hunter.” He can sniff them out. So when he turns up at a remote farmhouse in northern France and suggests to the owner that he might be hiding some Jews, we know they might as well abandon all hope. But against all the odds, one of them, Shosanna (Mélanie Laurent) escapes.

Meanwhile, American Lieutenant Aldo Raine (Brad Pitt) is putting together his own team of eight Jewish men, with the sole purpose of wreaking a bloody revenge on the

Nazis. Each member of his team – the Basterds – is instructed to bring him back one hundred Nazi scalps. And when he says scalps, that’s exactly what he means.
Some time later, Shosanna has adopted a new identity and is now running a cinema in Paris. She’s befriended by a German soldier, Fredrick Zoller (Daniel Brühl), who’s become a national (socialist) hero after fighting off dozens of enemies single handed – Goebbels (Sylvester Groth) has turned his story into a rabble-rousing German feature film and Zoller wants it to be premiered at Shosanna’s cinema.

Shosanna welcomes the Nazi invasion of her cinema, seeing it as the perfect opportunity to wreak her own revenge on those who destroyed her family.

Aldo Raine and his Basterds, meanwhile, are working their way, scalp by scalp, to the top of the Nazi party, with the help of actress Bridget von Hammersmark (Diane Kruger), who has some invitations to Zoller’s premiere.

Will either plot succeed? Will they hinder each other? Will anyone come out of this inglourious mess with their scalp intact?

Tarantino is becoming decreasingly original with each film he makes and he was never really all that original in the first place, quickly building a reputation for taking themes and ideas from his favourite films. But that doesn’t make this any the less entertaining.

With Inglourious Basterds, he sets a western during the Second World War, and in case we don’t realise, he even uses western music to ram home his analogy.

Much like with most of his previous films, he seems to be ramming home another familiar theme – his inability to tell a single, coherent story. As he did in Kill Bill, Reservoir Dogs and Pulp Fiction, he breaks up the narrative into a number of short films, fading to black between each titled chapter.

There is much to admire in each chapter – the performances – of Waltz and Pitt in particular – are delights to watch. Tarantino, the writer, is on top form, as he leads you around the houses, keeping you interested and intrigued until you arrive at the destination.

But Tarantino, the editor, is nowhere to be seen, and each of the chapters goes on for just a little too long, which means with so many chapters, the whole film is quite a lot too long.

It’s a little melodramatic at times, there are a few plot holes and some wasted opportunities – a character called The Bear, with a reputation – we’re told – as fearsome as The Jew Hunter, fails to live up to the bite his moniker might suggest.

Inglourious Basterds lacks many of the visual flourishes we’ve come to expect from Tarantino, the director. There are few interesting or unusual camera angles or moves, which makes it feel rather pedestrian.

But it’s a thrilling yarn, every bit as slick, darkly comic and enjoyable as you’d expect from this accomplished film-maker. It’s all too easy for him and perhaps he’s just let his guard down a little – a little complacent, perhaps.

For Tarantino, it’s a cinematic disappointment – but more because of the heights it fails to reach rather than any particular failings. From anyone else, this would be a highly enjoyable – if violent – way to spend most of your evening.