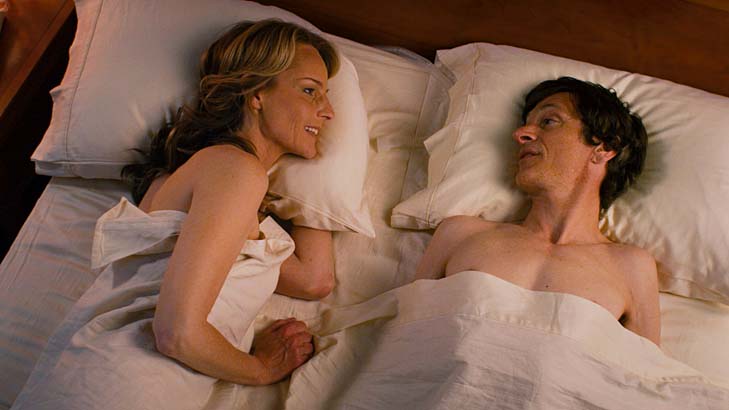 Academic and writer Mark O’Brien (John Hawkes) has been paralysed below the neck since suffering from polio as a child.

Now in his late thirties, he spends all day being wheeled around by his assistant on a hospital gurney and all night sleeping in an iron lung.

After falling in love with one of his carers and being unable to follow through, he’s decided that it’s time he lost his virginity, but there are several things standing in his way.

First, there’s his catholic guilt, so he turns to his new priest, Father Brendan (William H Macy), to try to secure the church’s blessing.

Next, he finds out about a local sex therapist – or sex surrogate – Cheryl (Helen Hunt), and hires her to do the business.

Cheryl has very strict rules about how she works – including a strict limit on the number of sessions, to ensure that emotions don’t get in the way. He might be a virgin, but few people know what they’re doing like Cheryl does.

The Sessions – based on the memoirs of the real-life Mark O’Brien – is a delightful, lightly comic drama that gets right to the heart of human relationships.

Lust, love, guilt, insecurity, humour – all human emotions are on display and most of them presented by the face of an actor who has nothing else available to him.

Like François Cluzet’s turn in Untouchable, in which he was confined to a wheelchair, John Hawkes delivers one of the most astonishingly heart-warming and heart-breaking performance with just his head. But unlike Untouchable, The Sessions has depth and maturity and seeks humour and meaning through believable, human characters not caricatures.

Since it was first shown publicly, at last year’s Sundance, where it won the audience award, The Sessions has featured strongly in festival and awards, but largely for Helen Hunt’s no-nonsense, supporting sex surrogate, but the always impressive Hawkes has surprisingly made less of an impact, missing out on an Oscar nomination.

Completely overlooked is William H Macy, who is tremendously entertaining in one of his most underplayed roles as the catholic priest who has little option but to put aside his prejudices and go with the flow when he realises that his parishioner is going to go ahead anyway; it’s a delight to watch him getting his kicks vicariously through a man whose mouth and mind move as much as the rest of his body doesn’t.

Some of the situations seem a little arch and at times the film verges a little close to being worthy, if not preachy, but the key relationships and the force of the narrative are compelling and life-affirming in a film that should be seen as an example by film-students and young actors alike.