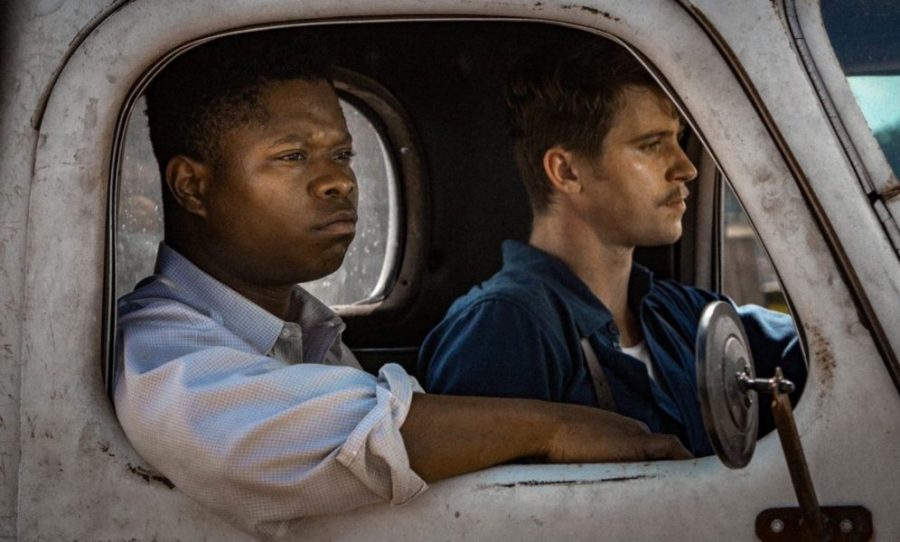 In the early 1940s, a lonely spinster Laura (Carey Mulligan) settles for a gormless businessman Henry McAllan (Jason Clarke), as he shows her interest and fearing being left on the shelf, she’ll take anyone who’ll just show her some interest. By the time his charming brother Jamie (Garrett Hedlund) turns up and makes her heart skip a beat, it’s too late; she’s committed to Henry.

Laura is somewhat stunned, when out of the blue, Henry announces that he’s bought a remote cotton farm in Mississippi and he intends to move down there from their comfortable life in Memphis – and what’s worse, his recently widowed racist father Pappy (Jonathan Banks) will be living with them. Dutifully, she agrees, but she’s not happy.

A black family, the Jacksons, already live and work on the farm for meagre wages, dreaming of the day they might be able to buy their own land, rather than working on someone else’s. Hated by Pappy but helped by Laura, the Jacksons are somewhat dehumanised by Henry, who just wants the cotton planted and doesn’t really care about the welfare of whoever is doing it. Heavy rainfall is eating into his profits and he’s just worried about his own family.

In 1941, the lives of the McAllans and the Jacksons are thrown together – and torn apart – when the United States is drawn into the Second World War. Jamie flies as a Captain in the US Air Force, while the eldest of the Jackson boys, Ronsel (Jason Mitchell), serves as a Sergeant in the Army in Germany, where he falls in love with a local woman and ends up being treated like a hero.

When the war ends, Jamie is delighted to return home and joins Henry on the farm. Ronsel is less excited about the end of hostilities as he realises that he’ll be going from hero, back to zero; having fought for his country’s very survival, he’ll be returning to the life of an underpaid, overworked farm hand, in a community where black people – or coloreds, as they were known at the time – were refused service at most shops, had to use the back doors of those that did let them in and were restricted to the back few rows on buses. The local rednecks were seemingly less friendly towards black Americans than the Nazis had been.

Back on the farm in peace-time, haunted by the war, Jamie and Ronsel develop an unlikely friendship that their own families can neither understand nor accept, as they struggle to fit back into civilian life and the deeply racist society that they’d escaped for the previous four years.

The director Dee Rees has not only adapted the 2008 novel of the same name but embellished it with scenes that resonate more closely with her own family history.

Her film is a tale of survival and a tale of social rivalries, making it clear that in 1940s America, whites had all the power and men had all the authority.

Much about this often horrific story feels disappointingly familiar; from the suppression of black people in twentieth century America to the overused narrative device of beginning with a key scene that we’ll be returning to after a lengthy flashback sequence.

The cast are pitch-perfect, striking the right balance between concentrating on their own families and their relationships with others within their community. Jason Mitchell’s returning soldier and Carey Mulligan’s hapless housewife are particular standouts in a strong ensemble cast.

This is a bleak tale, evocatively shot and offering some sharp observations – not least how being under enemy fire, thousands of miles away from home, would have been far preferable to a black American soldier than being in his local town, in peace-time, being treated like an animal by his moral inferiors, empowered by the state to behave like animals themselves.

It’s somewhat slow and a little overlong and structurally, rather unfocused – it may well be that the source novel had chapters told from the viewpoints of different characters, but on screen, it just gets confusing when you realise that almost every character is getting to narrate a different part of the story. It might be an ensemble cast, but often, audiences need to know who the film is about, who they’re rooting for – and if the film-making is strong enough, you shouldn’t need to hear the expositional pontification of individual characters – you should be able to read their thoughts on their faces.

There are moments in the story that will have most viewers wincing with discomfort or even hiding behind their hands but much of the characterisation is bluntly simplistic – black = good, white = bad – and frightening as the world it portrays is, Mudbound adds little to what we already know and to what we’ve already seen on screen. Furthermore, to what extent does reminding viewers of seventy year old injustices encourage behaviour to change now?

It’s a powerful and shocking story but apart from the counter-intuitive notion that for some black Americans, life was better during wartime than peacetime, much of it felt familiar.

It’s certainly a pressing reminder that there are no winners from such a racial divide and it could be argued that at a time when racial tensions remain high in the US, such stories cannot be told often enough, but it will be the same people seeing them all, rather than spreading the word to those who need to hear it.