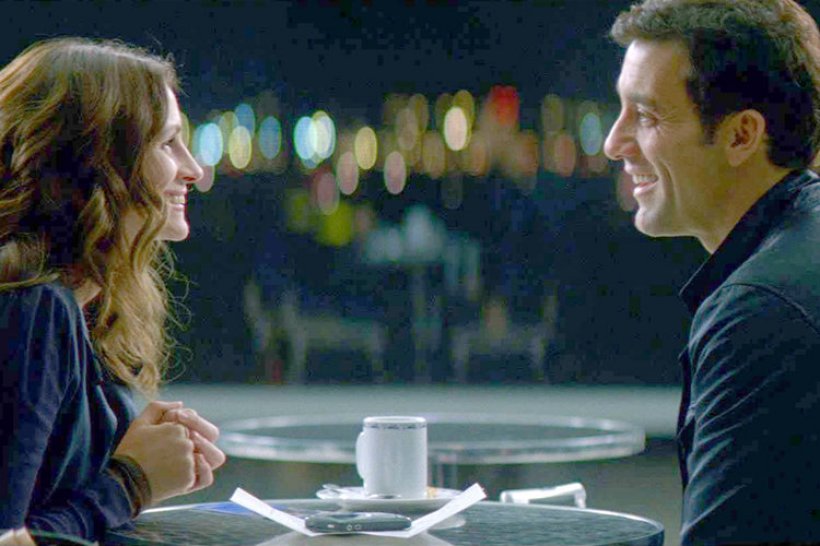 Ray (Clive Owen) used to be a British spy.

Claire (Julia Roberts) used to be an American spy.

Five years ago, they met at an embassy party, spent the night together and Ray woke up to find that Claire had run off with some secret documents he had hidden in his hotel room.

Cut to the present day and they’re no longer spying for their governments – but for rival entrepreneurs Garsik (Paul Giamatti) and Tully (Tom Wilkinson), whose corporations are trying to outdo each other to develop the next great invention.

Through a series of devious back-stabbing betrayals, pretty well everyone in the film falls victim to scam after scam, but there can be only one winner…

Here’s the thing – slick as this film undoubtedly is, with crackling performances from the two leads and the two key supporting artists, with plenty of sharp dialogue being flung back and forth, the film itself has as little substance as some of the inventions we’re expected to get excited about – such as a revolutionary new pizza crust and some hand cream or other.

And if the reunion of these stars – after Closer – is not enough, as if to boost the film’s credibility – or saleability – some of the key scenes are scattered across the globe, to the extend that the film could almost have been called The International – if it weren’t for the fact that that was a title of last month’s Clive Owen film.

But with this film, too, the clue is in the title – everyone’s lying to everyone else – you’re never quite sure who’s lying to whom – all you know is that whatever you hear anyone say is almost certainly not to be believed.

There’s not really any point in trying to second-guess the film either – whatever you think is really going on, you can be sure that the film-makers will twist it to wrong-foot you. There’s little enough logic and coherence to the detail that at any point, it could really go any way.

And without giving away the ending – of course – I can tell you that having invested all your time and energy in our former spies, it turns out that the real winners and losers are to be found elsewhere in the cast – so for those we are asked to follow and identify with, there’s really very little at stake. It almost feels like the whole film has been a wild goose chase.

And while there are characters who end up feeling frustrated and cheated – you’ll probably feel the same by the end of the film.

It’s fun while you’re watching it, but it becomes more inconsequential the more time that passes after the credits roll.
Duplicity is a tasty confection that dissolves quickly in your mouth and leaves little aftertaste.