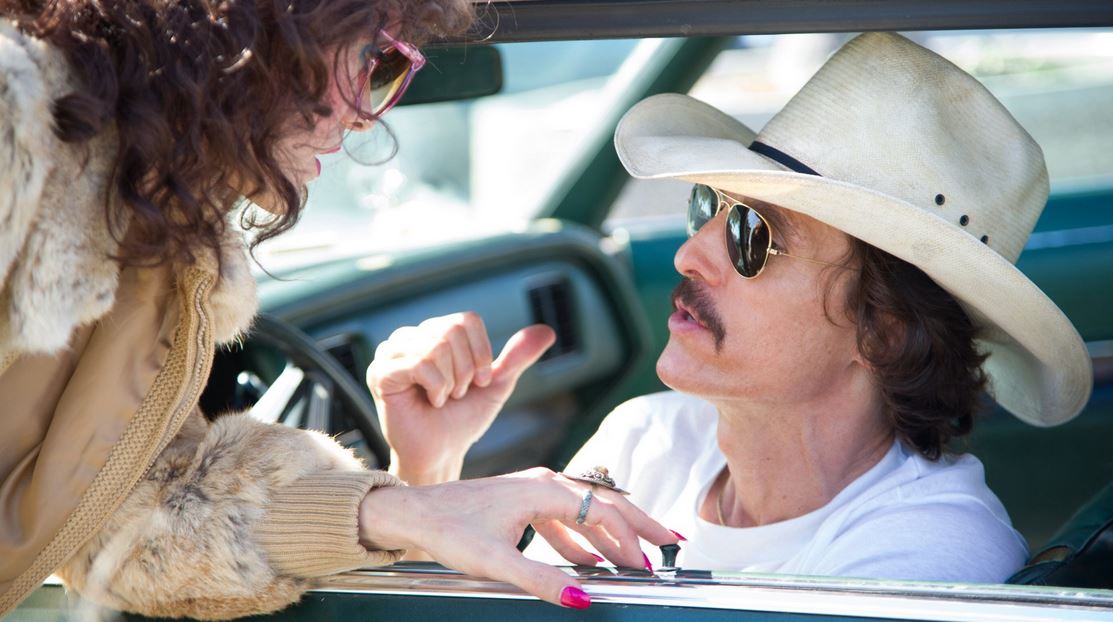 In the mid 1980s, only gay men got HIV and AIDS and it was their own fault – or at least that was the view of redneck Texan rodeo cowboys like Ron Woodroof (Matthew McConaughey).

An electrician by day and a hard-drinking, homophobic misogynist by night, Ron isn’t the most likeable character cinema has asked us to follow. After an accident at work, he’s taken to hospital and stunned when the doctor informs him that he’s HIV positive and has a month to live.

Refusing to accept it, he goes straight out to pick up a woman at a bar to take her back to his caravan, to prove to himself that he’s still very much the red-blooded male. But he’s feeling weak. He needs to seek help.

Back at the hospital, he finds that the drug AZT is being tested on some HIV patients but the doctors won’t accept him into the trial. He tries to persuade a fellow patient – a male-to-female transsexual, Rayon (Jared Leto) – to share her dose. Determined to live, Ron finds a way to get hold of the drug, but it doesn’t seem to be doing the trick, so he starts researching other options.

Soon, he finds himself travelling the world to bring back enough medication to treat the growing number of patients who need it, behind the backs of the hospitals who he thinks are dragging their feet.

But selling unauthorised drugs in the US is against the law, so he finds a loophole that will make him money and lengthen people’s lives; local HIV sufferers can pay a subscription to join a private club, whose members are given medication free of charge.

As more people find out about his Dallas Buyers Club, the hospital and federal law enforcement agencies start digging around to try to stop him, raising the question of whether HIV patients should be denied the drugs that could help them or the law itself should be changed.

While it’s a moving story, well told, the two key selling points of this film are its two stars, Matthew McConaughey and Jared Leto.

Both are rightly sweeping up all the trophies they can handle as awards season continues its inevitable journey to their – well, the Oscars.

The film is about amazing transformations, chiefly that of a homophobic misogynist redneck who defies the doctors and learns to fight for the rights of the gay community as he bends the law to saves their lives – and his own, of course, but also the transformation of actor-cum-rock-star Jared Leto to a transgender woman, and – for a crucial scene – back to a man, and more simply McConaughey’s transformation from a hunky 1990s romcom star to a skeletal, moustachiod monster.

It’s perhaps a little disappointing to learn that while Ron Woodroof was a real character, it’s suggested by those who knew him that he wasn’t actually quite as objectionable as the script suggests, while Rayon is a fictitious character created to act as a counterpoint to the protagonist.

But it’s Woodroof who’s the more fascinating character – the complexity of a man who’s forced to challenge his prejudice and complacency when his own life is on the line and who becomes a different man altogether – an inspirational hero for our time, for all our communities. As an actor, McConaughey has come a long way from the romantic comedies that kicked off his career – and damaged his credibility – more recently metamorphosing into one of the most respected actors in Hollywood, in films including Mud, Killer Joe, The Paperboy and even his supporting role in The Wolf of Wall Street.

While Dallas Cowboys Club is oddly uplifting, for a film about people with HIV being denied the drugs they need, with a homophobic redneck at its heart, an emphasis on the performances and appearances over the narrative, along with a failure to disclose how much of the story is not as real-life as suggested, makes it more of an acting masterclass than an historical expose of social and medical scandal.

Being a blend of fact and fiction makes it harder to discern whether it has a message or whether there’s anything we can learn from history and the film feels somewhat removed from reality, fitting a standard dramatic formula of a damaged hero, seeing the light and helping the underdogs against the evil authorities.

Every now and then, a story comes along which makes you think “if it happened in a movie, you wouldn’t believe it” – and in this case, it’s not quite clear how much of it we should believe.