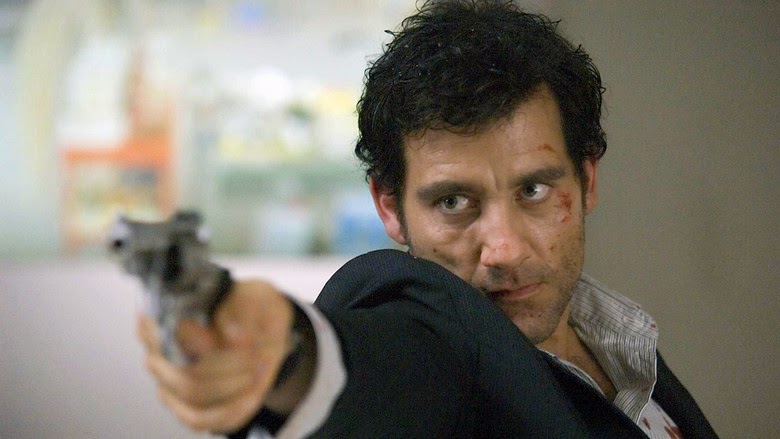 Interpol agent Louis Salinger (Clive Owen) sees his partner drop dead, seconds after a meeting with a whistle-blower at a big international bank.

Salinger is working with New York Assistant District Attorney Eleanor Whitman (Naomi Watts) to bring down the bosses at a corrupt bank that’s selling weapons to opposing sides in international conflicts – which it believes will create the debt it needs to thrive.

A fortuitous discovery helps Salinger trace the hitman used by the bank to dispose of anyone who gets in its way – but the closer they get to the truth, the more obstacles they come up against — chiefly in the shape of bullets — aimed at them and anyone who can help them.

With scenes set everywhere from Berlin and New York to Milan, Luxembourg and Istanbul, what else could this be called?

As the world’s going through a economic crisis, what more fitting a baddie is there than a global bank that deals more with weapons than cash? The final message is suitably worthy and fatalistic in the circumstances.

While it has exciting moments and a meaningful undercurrent, it falls far short of many of the better conspiracy films as a piece of rounded and well-structured entertainment.

There are too many people involved in this conspiracy – so it gets to the stage where you lose count – who’s trying to kill whom, where, why and how?

It’s so complicated, that you need to stop and think – but that’s OK, because every now and then, the plot comes to a stand-still so that key characters can explain to the audience what’s going on.

The exposition is interspersed with some impressive action sequences – among the most memorable is an extensive shoot-out at Manhattan’s Guggenheim museum — and the detail put into an assassination attempt feels authentic.

But the key to uncovering the whole conspiracy rests on the most convenient maguffin in recent cinema history.

And some of the dialogue – as clever as it is poetic – doesn’t feel real, because too many characters fling melifluous truisms at each other, as if words are more powerful than bullets.

Not in a conspiracy thriller, they’re not.

The only difference between fact and fiction might well be that fiction has to make sense – and you might well find your destiny on the road you take to avoid it – furthermore, you do indeed have to know which bridge to cross and which to burn – but these are bankers, hitmen and law enforcement agents – not evil poets.