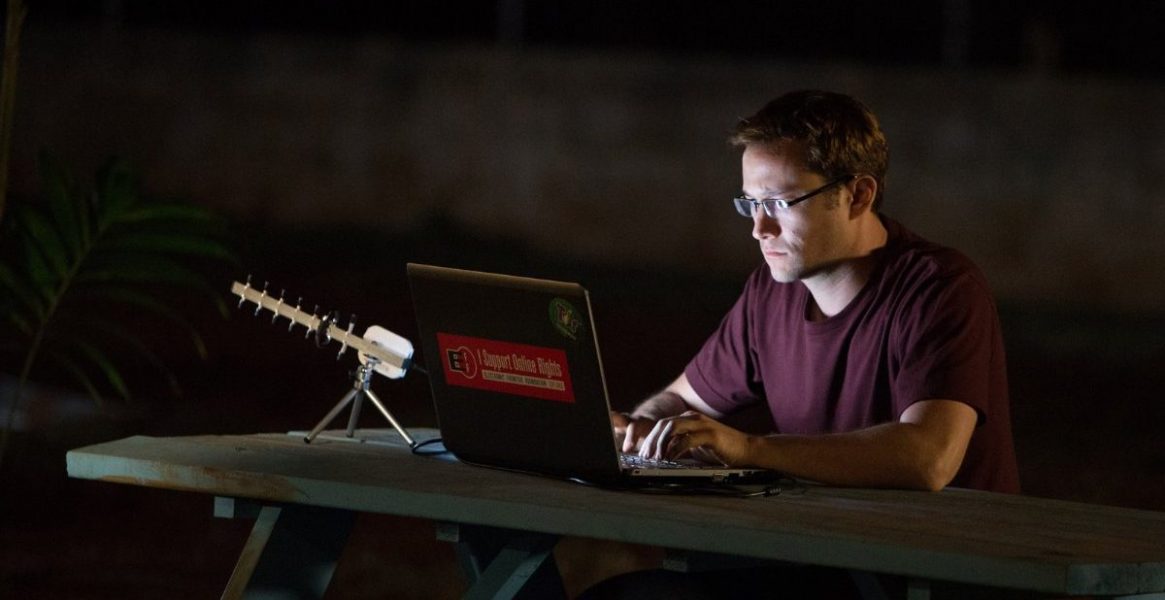 Edward Snowden (Joseph Gordon-Levitt) is a young, conservative patriot, with dreams of a career in the special forces. But when a leg injury forces him to return to civilian life, he ends up finding another way to serve his country.

He joins the CIA’s computer team, doing everything from blocking Chinese hackers to devising systems to back up data.

When he’s asked to do something he believes to be immoral, during a posting in Geneva, he quits the CIA, but soon returns to government service as a contractor for another agency, the NSA.

With his liberal girlfriend Lindsay (Shailene Woodley) constantly reminding him that the government isn’t always right, he re-evaluates his attitude towards the mass surveillance that he’s discovered and concludes that the security services are casting their net far too wide – spying on every American, rather than just those who pose a threat.

When Snowden discovers that a system he developed for other purposes is now being used to help the surveillance operations, he can take no more.

He then sets out to expose the government’s surveillance programmes, knowing that life as he knows it will end from the moment he opens his mouth.

It’s rare to see a biopic set during such a recent period of history, but for political agitator Oliver Stone, Snowden is an opportunity to rant about things that concern him about big government in the here and now; what would be the point of moaning about something that has long since been confined to history? (…which might prompt me to refer you to another of this week’s releases, The Birth of a Nation.)

But as the screenplay starts ticking off, one by one, all the bad things governments do, Stone seems to be using his lead character to get things off his own chest – the film is almost more about the director than it is about its protagonist – as the film begins to sound like an unfocused polemic, a full-on assault on the establishment; while much of it is interesting to consider, some of it seems too far from the core story of Snowden to be relevant – which might explain how the film has ended up in excess of two and a quarter hours. It’s long and slow and often feels repetitive. The story actually comes to a suitable end half an hour earlier, but Stone lets it ramble on, not least for a celebrating montage to remind us that – in his view – Snowden was vindicated by President Obama’s U-turn in outlawing the surveillance programmes in question. There’s also a coda that provides the opportunity for a couple of unexpected cameos.

It’s true that the film has to be long enough for Snowden’s nine year journey from conservative patriot to liberal agitator to seem convincing – and perhaps necessarily, this feels episodic and often goes in fits and starts. He seems to swallow much of what he doesn’t like and then suddenly gets a bee in his bonnet about something that’s a little off-topic. And while there are signs of frustration at certain points doing this story, there are no clues to his explosive revenge almost until it happens.

The film is framed within an interview Snowden did for the documentary maker Laura Poitras (played here by Melissa Leo), as she was shooting her documentary CITIZENFOUR, which presents Stone with the perfect opportunity to use a combination of narration, exposition and flashback, making the general structure seem somewhat familiar and clunky.

Some critics have argued that there’s little point to this film, since the aforementioned documentary presented the story so well, but it remains a truth – seen with such combinations as The Armstrong Lie/The Program, Man on Wire/The Walk and We Steal Secrets/The Fifth Estate – that while documentaries, featuring the real people, are often more compelling, it’s still possible to produce an entertaining narrative version that will appeal to different, if overlapping audiences.

But while, on the one hand, Stone is trying to persuade us of his message, he often distracts us with unnecessarily dazzling cinematography. It’s not easy to make a film about a man who spent his whole career looking at a computer appear suitable for the big screen and this is somewhere that Stone certainly succeeds – the lighting, shot-framing and blocking lead to a visually arresting film, befitting of dialogue that’s often snappy and gripping.

There’s also a fascinating insight into the way competing journalists prepare to launch a big exclusive – can The Guardian get all its ducks in a row in time to satisfy the campaigning reporter who’s prepared to go it alone if necessary?

Joseph Gordon-Levitt’s earnest central performance gets under the skin of the eponymous hero (or anti-hero, depending on your point of view), not least because of the way he alters his own voice – as other actors do with their appearance – and as Gordon-Levitt himself did in Looper.

The supporting cast is also well populated – Rhys Ifans is as passionate in his efforts to create spies in his own image for the good of the country as Zachary Quinto and (a Scottish) Tom Wilkinson are about trying to break the story. Nicolas Cage is a welcome addition to the background in a cameo that requires him to be oddly understated, almost to the point that you wonder why he was cast in the first place.

But while the performances are strong, the motivations aren’t always clear. For most of the film, we’re watching a man struggling with the conflict between his drive to serve his country and his concerns about how his country is behaving, but we don’t really get a sense of what’s wrong with what it’s doing; we’re clear that Snowden didn’t approve of mass surveillance and clearly Stone was also angered by what went on – but even the supposed moral core of the film, liberal Lindsay, tells him she’s not bothered if anyone’s watching her as she has nothing to hide. And as Ifans CIA bigwig points out, in his view at least, the public are more concerned about security than freedom.

Yes, the film shows the surveillance techniques being abused on occasions – but is that not more the misbehaviour of irresponsible individuals than an inherent failure of the system? And of course, we don’t see any examples of the security services using their monitoring to prevent attacks, as they have evidenced in numerous court cases, as that would undermine Stone’s argument that monitoring everybody just in case is more immoral than waiting for threats to become evident and then hoping you can stop them before it’s too late. But of course, it’s not Stone’s job to present a balanced presentation of both sides of the argument – he’s just trying to tell as compelling a story as he can.

That said, in a reverse of the traditional “show-don’t tell” maxim, some of the more thought-provoking defences – or explanations – of the establishment position are put across in a number of monologues from Rhys Ifans, although it’s a little unclear what his CIA role is – is he a recruiter and trainer or is he actually someone with authority and influence?

The more interesting arguments against America’s latent foreign policy – that in his view (Snowden’s and presumably Stone’s too) the intelligence community is tasked more with promoting America’s economic and social agenda than it is with preventing the “short-term” threat of terrorism – is mentioned only fleetingly. Perhaps Stone is saving this for his next anti-establishment expose.