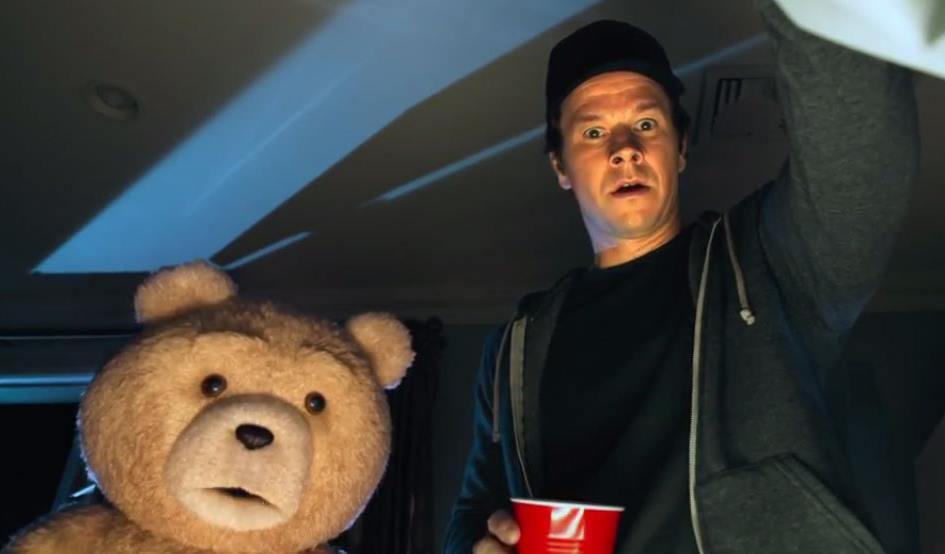 John (Mark Wahlberg) is newly single at the wedding of his best friend Ted (voiced by Seth MacFarlane) to Tami-Lynn (Jessica Barth) – yes, that’s a two foot tall talking teddy bear marrying a sexy, ex-con, supermarket checkout-girl. A match made in heaven, you might think.

Eighteen months on, the marriage isn’t going so well, so Ted suggests to Tami-Lynn that having a baby might bring them closer together and she jumps at the idea. Don’t worry, we’re not about to witness any human-on-teddy action – the couple first try to find a sperm donor and then turn to adoption.

But in being rejected for adoption, it turns out that the process has thrown up a legal problem that has, until now, eluded the authorities; Ted is now deemed to be property and not a person, and so cannot adopt – or even be married.

Ted and John take on an up-and-coming civil rights lawyer, Samantha (Amanda Seyfried), to take Ted’s case to court, to secure him the right to be recognised as a person – so that he can officially remain married and adopt.

Three years after the potty-mouthed teddy bear Ted burst onto our cinema screens with the delightfully shameless chutzpah of a cheeky child, he’s back. But this time, the tiredness of a sequel is writ large on the screen.

A superficial story that tries to paint itself as a satire on the civil rights struggle of minorities is little more than a lazy excuse to bring an entertaining character back to the big screen. Ted himself will remain entertaining to anyone who enjoyed his previous outing, and he will continue to irritate anyone who hated him last time, but those viewers shouldn’t even be giving this a try.

It’s for such die-hard fans that they don’t need anything other than dirty wise-cracks and cultural reference gags, because there’s nothing else to engage the audience, as writer/director Seth MacFarlane managed to do with his original concept in 2012.

What felt fresh last time has become tired. Mark Wahlberg’s John is even more wet than he was when we first met him. Amanda Seyfried’s Samantha is one of those irritating comedy foils that simply doesn’t exist in reality (not that talking teddy’s do, of course!) – a weed-smoking party girl who’s so intellectual that when she’s not under the influence, she’s as square as she is culturally clueless.

A sub-plot involving Giovanni Ribisi was the worst part of the first film, but it returns here, nevertheless. That, along with a recurring joke involving Family Guy’s Patrick Warburton, is not funny and simply provides excuses for more cheap gags.

The main story is not without merit, but while it’ll raise a handful of smiles – even laughs that will embarrass those who join in – it’s too much of a stretch for this puerile and derivative retread of Seth MacFarlane’s only big screen success to date to been regarded as the social commentary it desperately wants to be.