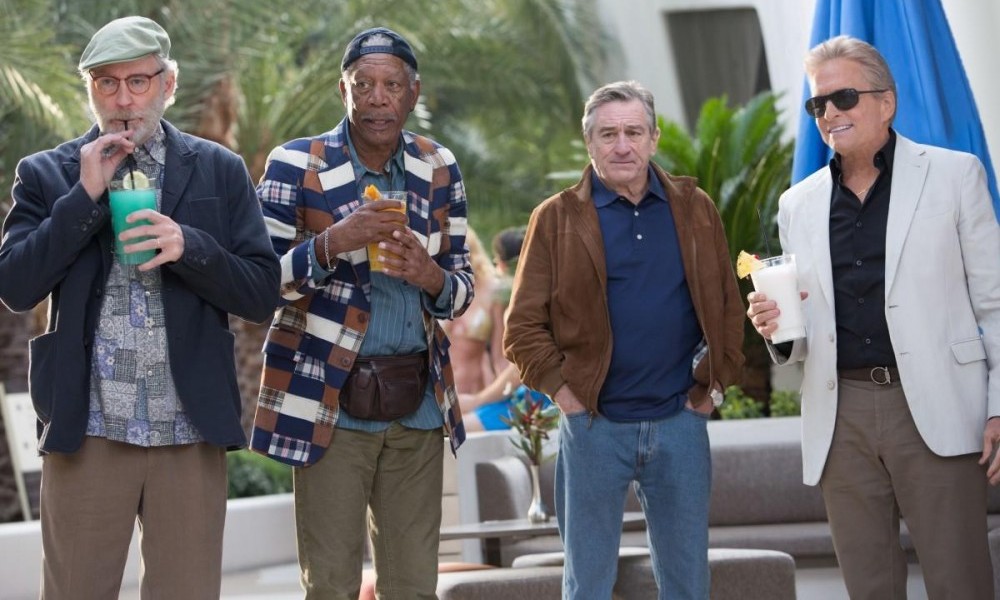 Pushing 70, perennial bachelor Billy (Michael Douglas) finds himself accidentally proposing to a girlfriend (Bre Blair) young enough to be his own daughter. Sensing death rapidly approaching, he decides to see it through.

With his three best friends from childhood, he heads to Las Vegas for a stag weekend that reawakens their youth and highlights the failures and disappointments of their adult lives.

Archie (Morgan Freeman) is a frail old man, who has to slip out, avoiding the ever watchful eye of his protective son (Michael Ealy). Sam (Kevin Kline) has permission from his wife Miriam (Joanna Gleason) to get any sexual frustration out of his system. Paddy (Robert de Niro) is harder to persuade; he hasn’t left his New York apartment since his wife died – a wife who was also part of the original crew of kids.

Within hours of arriving in Vegas, the group stumble into a hotel bar where lounge-singer Diana (Mary Steenburgen) is failing to stir up the drinkers, but they are entranced and soon find themselves flirting with her over drinks.

As she starts to show them around town, it becomes clear that sparks are flying between her and more than one of the gang.

It’s easy to criticise a film like this, with a collection of high profile leading men enjoying a bit of fun with their friends, but Last Vegas is consistently funny, surprisingly warm, and while it’s quite clear where the plot is going, it’s well told with top rate performances.

Kline is on the most comfortable turf, being the most familiar with gently comic roles, Douglas and Freeman adapt to comedy like ducks to water and de Niro is back in his “straight man in a comedy” role, which he pulls off effectively enough.

Even in a comedy, there are a few too many moments that feel a little too removed from reality – such as the gang finding themselves judging a beauty contest at their hotel – and you might feel a little uneasy or unconvinced about the consequences of the plot on some of the younger characters, both male and female, but if you come out of a film feeling better and knowing that you’ve spent the best part of two hours smiling or even laughing, it would be churlish to knock it.

It achieves what it’s trying to achieve and has no pretensions to be what it isn’t. It’s a simple concept, efficiently executed and leaving you just a little less frightened to be getting older.