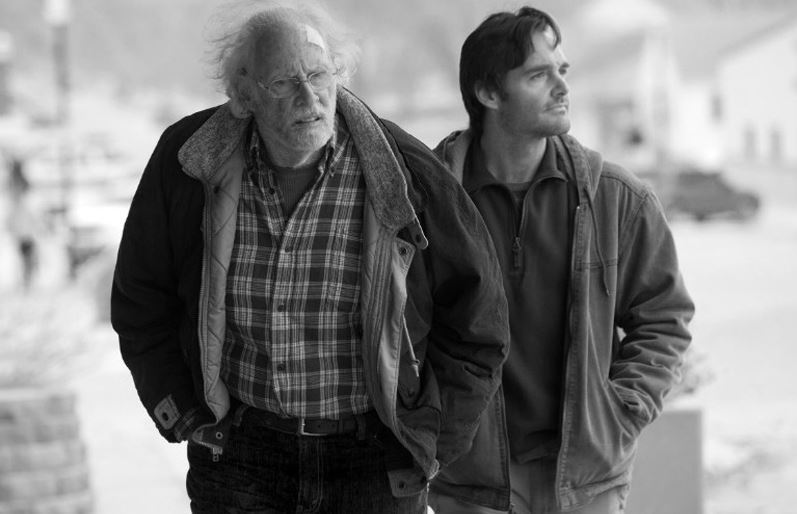 Elderly Montana resident Woody (Bruce Dern) has the early signs of dementia. It’s making him increasingly cantankerous and isolating him from those around him as he finds it harder to grasp reality.

When he receives what’s clearly a marketing scam, he genuinely believes that he’s won a million dollars. Somehow, he needs to get more than eight hundred miles to Lincoln, Nebraska, to collect his winnings.

Unable to persuade his father that it’s a hoax and unwilling to shatter his dream, Woody’s son David (Will Forte) agrees to drive him to Lincoln, with no idea what he might do when they get there and find that there is no pot of gold at the end of the rainbow.

The journey takes them through places that Woody grew up; as he spreads the news of what he believes to be his good fortune, he becomes a bit of a local celebrity, but it also pulls some old enemies out of the woodwork, trying to get their slice of the action.

Sideways and Descendants director Alexander Payne has chosen a stark but tasteful monochrome format for his latest film, that explores his familiar themes, a road movie built on strained family relationships and dashed hopes.

Payne says that ninety per cent of directing is getting the casting right, and he’s done that here. Bruce Dern’s dominant performance deservedly earned him a the Cannes Best-Actor prize and is likely to put him in the running for similar honours come awards season.

Will Forte, as the son, offers strong support, as he finds himself supporting his father, humouring his hopeless determination and protecting him from the unwanted attention his situation brings upon him.

June Squibb is also a delightful presence as Woody’s long suffering wife – perhaps the most down-to-earth presence on screen.

Payne’s story is a sharply observed but simple narrative, unrolling with wry humour, love and understanding and his ability to elicit continued sympathy for such a cantankerous central character is remarkable.