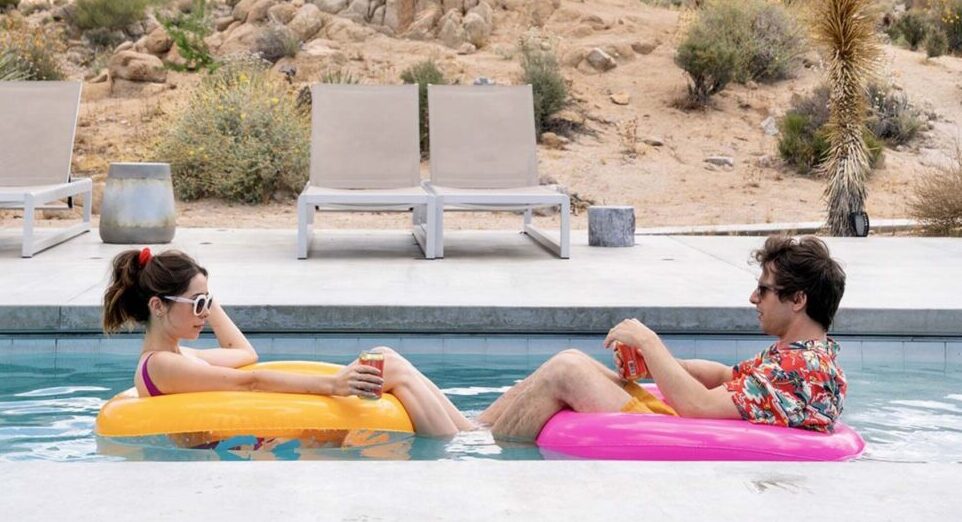 Nyles (Andy Samberg) is in Palm Springs for a wedding, where his girlfriend Misty (Meredith Hagner) is the maid of honour.

Their relationship is a little strained – he knows she’s cheating on him it doesn’t take long for his own head to be turned by the bride’s sister Sarah (Cristin Milioti).

As Nyles and Sarah are sharing a private moment in the dessert, a shot rings out and Nyles runs to a cave for cover. Sarah follows.

When they next wake up, Sarah realises she’s living the wedding day all over again. When she first meets up with Nyles, she realises that he’s been stuck in this time loop for some time already.

Day after day, they get to know each other better and decide they properly fall for each other. But while he’s happy to live the same day over and over again with her, she’s determined to escape and get back to the real world.

Ever since the film Groundhog Day gave its name to the idea of living the same day over and over again, the idea has been explored across modern culture – but while other attempts have felt a little like Groundhog Day, as it were, this romantic comedy is perhaps the first time anyone has had anything fresh to add.

Having more than one character stuck in the loop provides scope for several original elements. Firstly, there’s the opportunity for different characters to have different approaches with their predicament. There’s the blame game as some accuse others of being responsible for them getting caught up in the mess. Then there’s the added dynamic of two separate sets of interactions going on – those reliving the day over and over again have their own relationships developing, in addition to their affects on those experiencing the day for the first time.

The narrative is played for laughs, without jeopardising the drama and also provides some thought-provoking insights into the human psyche. It’s rarely clear where the plot will go but largely, it remains convincing.

There is a moment, towards the end of the film, where the plot is pushed just a little too far and you feel they should’ve just held back and left it to our imagination, but it does allow for a sharp post-credit sequence.

And at a satisfying 90 minutes, it’s a film that you’ll probably want to see again and again – perhaps not every day – but there’ll be plenty to enjoy and think about.