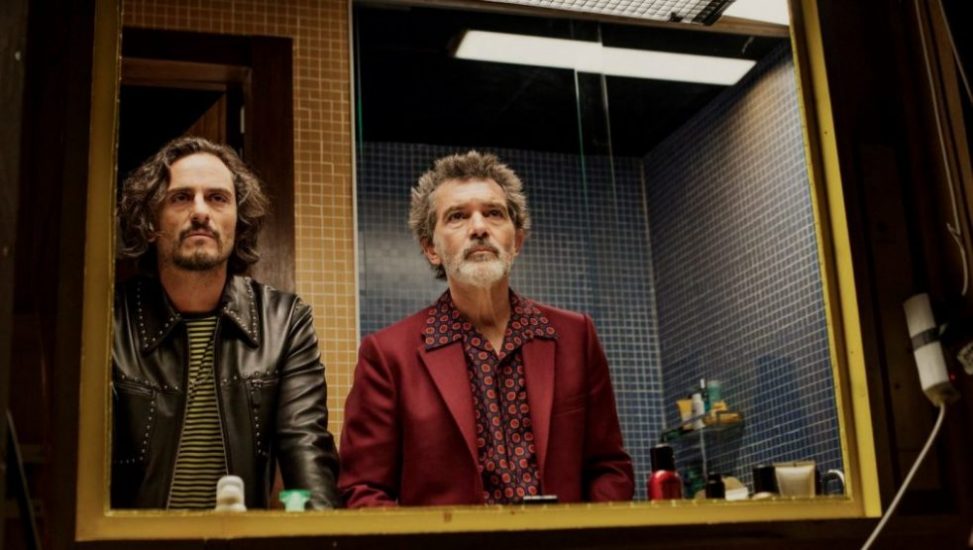 Salvador Mallo (Antonio Banderas) is a film director, past his prime – personally, physically and professionally. He’s lonely, he’s in constant pain and he hasn’t had a hit film for years.

He couldn’t get through life without his trusty assistant Mercedes (Nora Navas).

When he’s asked to introduce a retrospective of one of his early successes, he makes contact with the film’s star Alberto Crespo (Asier Etxeandia), three decades after they last spoke, when they fell out.

Rekindling their friendship introduces Salvador to pain-control measures he wouldn’t have previously dreamed of – and a new creative collaboration leads to another reunion with someone else from his past – someone he has long since been dreaming of.

While it looks, feels and sounds like an Almodóvar film – from the bold colour palette, tragic love and snappy dialogue to the strong female characters, although only in supporting roles here – it’s far more personal than anything the director has done before.

With its autobiographical undertones, it feels very much like there’s a story that he needed to tell – but compared with the anarchy, farce, thrills or horror of many of his earlier works, this film – from a director who’s a month away from his 70th birthday – appears to be more for him than for us; it’s time for him to reflect on his own life, which – as you might expect – turns out to be more meaningful for him than for most of us.

While the acting is as strong and convincing as it could be and the characters are as believable and likeable as they need to be – even in Salvador’s weakest moments – the narrative itself lacks the ambition we’ve come to expect. We get some unrequited love and nostalgia, tinged with melancholy and unfulfilled hope, but it feels like much of it could be happening to anyone that any of us might know – bursting with everyday regrets and insecurities, much of it seems somewhat mundane and lacking in any of the hyper-realism we’re used to from him.

Writers with writers’ block are a staple of cinema and depressed protagonists chasing the ghosts of their past are similarly common – even within his own work.

Being clearly personal for Almodóvar doesn’t make his own life experiences inherently more interesting for us.

The production boasts many of his familiar directorial flourishes – such as framing it in a neat twist on the fractured timeline – and it’s every bit as confident and competent as we’d expect from him but the narrative at its heart, while moving in a soap-opera-storyline kind of way, simply isn’t that engaging.

The film starts off promisingly, with a visually enlightening exploration of his own provenance – we see how all his knowledge of geography comes from having traveled around the world to promote his films and all of his knowledge of anatomy comes from his own illnesses – but it settles down into a tender, gentle drama that wouldn’t be out of place on daytime TV.

Heavy on pain and light on glory, Pain & Glory is typically bold in colour but soft in tone – a welcome taste for the senses but a slightly disappointing after-taste for the heart and mind.