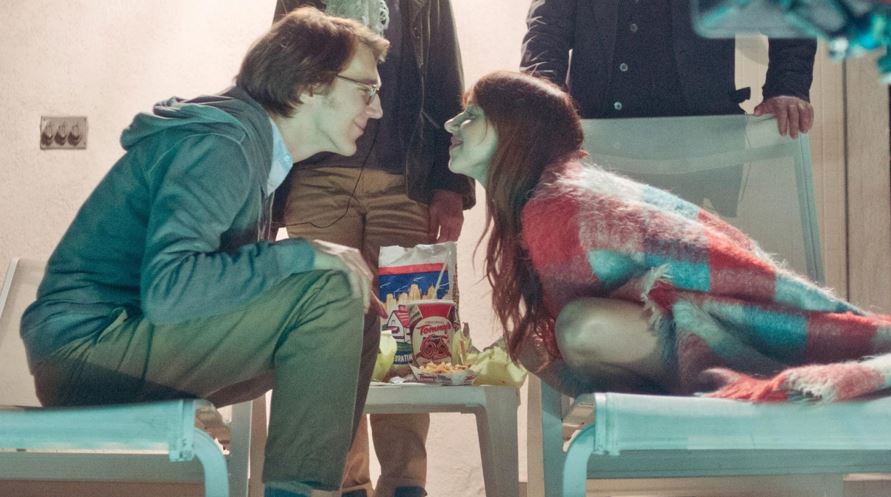 Lonely, love-lorn author Calvin (Paul Dano) is still living off the success of a ten-year old book, sharing his Hollywood Hills house with his dog and with few friends other than his brother.

He’s in therapy – of course – and to top it all, he’s suffering a severe case of writer’s block. His shrink (Elliot Gould) sets him a writing exercise, which he finds less than inspiring.

But when he catches himself dreaming about a gorgeous, flighty girl, he decides to start writing about her. He calls her Ruby Sparks. The more he writes, the more enthusiastic he becomes about this angel.

Just as his confidence begins to return, he’s a little taken aback to find Ruby (Zoe Kazan) in his kitchen, in her underwear and a shirt, making eggs. Has he created his ideal woman, just be writing about her?

Calvin realises that somehow, whatever he writes about her comes true – but he soon comes to see the power to create perfection as more of a curse than a blessing.

The oft-visited realm of a struggling writer is given a fresh twist in Zoe Kazan’s script, directed by the couple behind Little Miss Sunshine.

Paul Dano – so memorable in that film as a teenager who wouldn’t speak – is about as loquacious as you can get here, as a writer whose words guide his story and the film.

As a protagonist, Calvin is warmly witty, empathetic and self-deprecating if a little self-important. His brother Harry (Chris Messina) is a peculiarly believable blend of smarmy but supportive, although it wasn’t entirely convincing that he was – essentially – Calvin’s only friend.

Annette Bening as Calvin’s new age mother seems unnecessarily eccentric for the story and Antonio Banderas – while entertaining – feels a little out of place in this fairytale.

And fairytale is probably the word that best describes this mature, magical story of a man who unwittingly creates the woman of his dreams and then finds that it isn’t such a dream after all. Careful what you wish for, as the maxim goes. What starts off as a whimsical comedy becomes something much darker, before settling into an inevitable ending that, if not predictable, isn’t particularly surprising.

It has the ending that you probably would have written for it yourself.