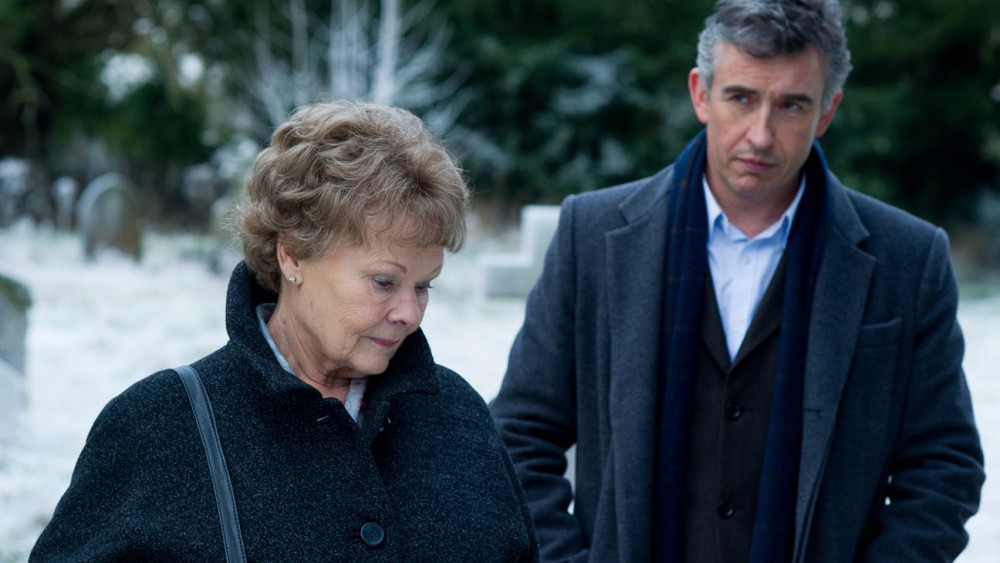 In 1950s Ireland, if teenaged girls became pregnant, their families sent them to a convent, where they’d have the baby and be forced to work for several years to pay off the medical costs, the child care and their living expenses. Often, they never got to take their children home with them, as they were put up for adoption against their will – and in many cases, sold to the highest bidder. Essentially, the Catholic church stole the babies and sold them for profit.

Fifty years after giving birth in such circumstances, the god-fearing Philomena Lee (Judi Dench) can’t keep it a secret any longer. She comes clean to her daughter and resolves to find her son.

At a party where she’s working as a waitress, Philomena’s daughter approaches the former BBC Moscow and Washington correspondent, Martin Sixsmith (Steve Coogan), who’s recently lost his job as a government spin-doctor and is looking for something new to write about. No-one is interested in his proposed book about Russian history, so he’s open to the idea of writing what he disparagingly refers to as a “human interest” story.

After meeting Philomena, Martin agrees to help her investigate what happened to her son after he was sold. The pair head first to Ireland, to visit the convent, but the nuns have no information about where he might have ended up; all of the paperwork got burnt in a fire, some years earlier. Conveniently, the document she signed, giving up any right to contact with her child, was saved from the flames.

When Martin finds out that the convent sold many children to rich Americans, he takes Philomena to Washington to help him follow up leads he gets from the contacts he made there during his BBC days.

This is, of course, based on a real story – but it’s as much the story of the journalist as it is the story of the wronged mother. Martin Sixsmith did get a book out of Philomena’s story and it’s that book that Steve Coogan and his writing partner Jeff Pope have turned into a mature, cynical, thought-provoking screenplay.

Mature, because, while he retains the lightness of touch of Alan Partridge, Coogan delivers an understanding and sympathetic take on a shocking real-life tale that refuses to patronise its characters or viewers; cynical, because he retains the hard-nosed journalist edge – always looking for the story over the human interest, balancing populism with worthiness; thought-provoking, because it challenges religious perceptions and cultural controversies, as the atheist journalist who is turned increasingly against organised religion by what he learns is challenged by the wronged woman who refuses to give up her faith.

In many ways, Philomena is an odd-couple road movie across space and time which manages to squeeze a surprising amount of humour out of the stunningly bleak story at its heart. Coogan’s provenance, as a writer and performer, clearly help in this regard, but Dame Judi Dench is satisfyingly adept at the comic elements. That said, there were some inconsistencies in her performances – at times traditionally naive but at times modern and savvy. She was also a little old for the role.

But from the point of view of the storytelling, it can’t be faulted – Philomena is a well-paced, emotional story that’s surprisingly cathartic given the outcome. Dramatically, it takes twists and turns you couldn’t predict, feeling almost believable at every point – and where it strays from credibility is largely because some facts have been massaged for artistic purposes – it turns out that Philomena herself never actually visited Washington, for example – yet this is a key part of the film.

There’s certainly a sense in which the film restores your faith in humanity, if not religion – Philomena’s response to her plight, against Martin’s judgement, is uplifting, if hard for some to accept.