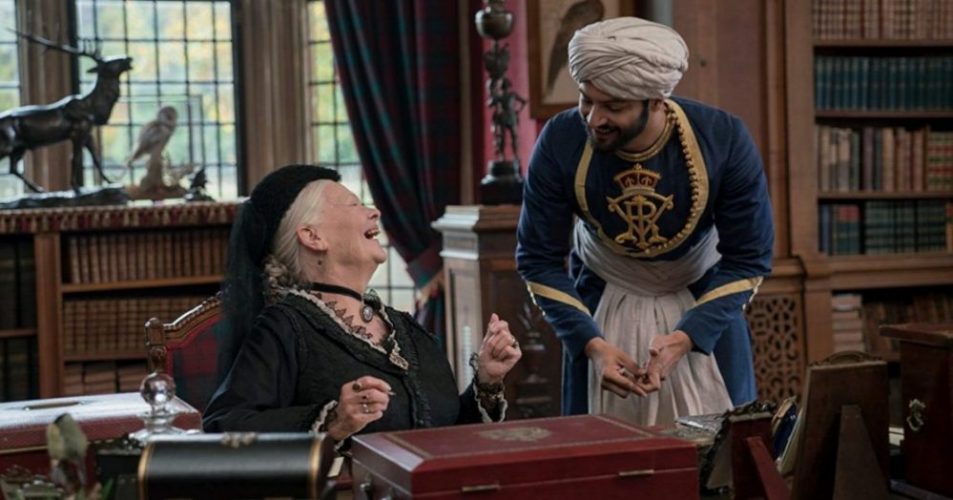 In 1887, Queen Victoria’s Golden Jubilee year, two Indian men were chosen to travel to England to present her with a medal in honour of her service to their part of her Empire.

Unable to resist the temptation to defy his orders and jump out of the shadows, Abdul Karim (Ali Fazal) boldly makes eye contact with the Queen (Judi Dench) and she rather likes the attention – from such a handsome young chap. Rather than being sent home in disgrace, Abdul – and his fellow traveller Mohammed (Adeel Akhtar) – are asked to stay on to be the Queen’s personal footmen for the whole Jubilee year.

As the weeks and months pass, Victoria becomes increasingly friendly with – and reliant on – Abdul, whether it’s for his honest enthusiasm, irreverent banter or knowledge of a part of her empire that she has never even visited. At the same time, she starts to shunt her closest advisers – such as Sir Henry Ponsonby (the late Tim Piggott-Smith, in one of his final roles) to the sidelines.

Other members of the Royal Household, led by her eldest son Bertie (Eddie Izzard) – the future King Edward VII – rally round to try to curtail Abdul’s growing influence on the monarch.

But as the longest serving Queen in history, Victoria is more than able to handle herself and as long as she remains on the throne, she’s determined to keep Abdul at her side.

After decades of having timid, sycophantic cronies tip-toeing around to conform to all the rules of etiquette, this film would have us believe that Victoria was delighted by the refreshing irreverence of this outsider, played with bold confidence by Ali Fazal.

There’s much humour to be found in Abdul’s fish-out-of-water journey, the odd-couple friendship that develops and the gentle mocking of the Victorian era establishment. There are also some worthy social observations, which feel oddly topical, as it emerges that “the Hindus” are in fact Muslim.

But somehow, while the opening caption notes that the story is “mostly” true, you get the impression that if there was someone so significant in the final fourteen years of the longest-serving British monarch until the incumbent, that we’d know more about him. “Partly” true, might be more of an accurate description, but perhaps the real-life story isn’t quite dramatic enough for the big screen?

The film is a harmless and perfectly enjoyable insight into this period of Queen Victoria’s life, that hangs on intricate production design and costumes and confident performances all round. Eddie Izzard is particular fun as the pompous Prince of Wales and Judi Dench – reprising the role she last played 20 years ago in the film about another of her close friendships, Mrs Brown – will become almost more associated with Queen Victoria than the monarch herself.

Reuniting her with Philomena director Stephen Frears, the pair are clearly comfortable working with each other, but there’s a rather odd decision to hide her face for the first few minutes of the film, as if it’s going to be a great surprise when she’s revealed as the central character and perhaps the film’s weakest point is its failure to convey the passage of time; it feels like it unfolds over a period of a few weeks or months – but in fact, the events depicted cover the fourteen years until the Queen’s death.

Somehow the drama is a little uneven with an imbalance between the influence Abdul has over Victoria and the response of her household to him and the precise nature of the relationship between the young man and his much older companion feels a little uneasy at times.

It’s an entertaining piece of Sunday afternoon PG fare, but the narrative is a little repetitive, the drama is generally slight and it doesn’t quite have the heft of a historical study.