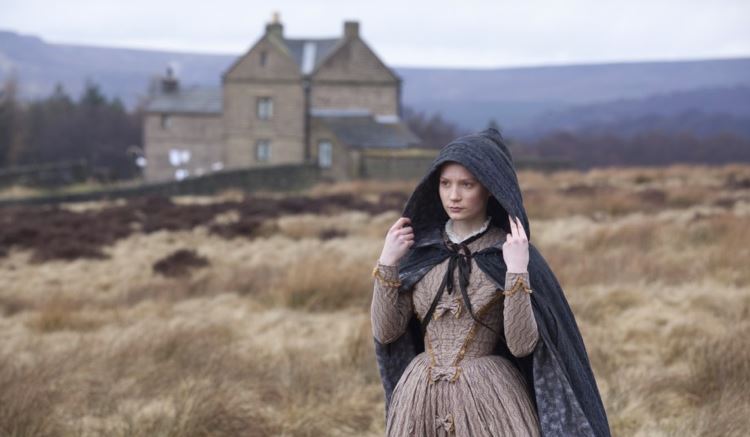 A desperate, plain young woman, Jane Eyre (Mia Wasikowska) flees from a country estate in nineteenth century England, and is grateful to be taken in by a young clergyman, St John Rivers (Jamie Bell) and his sisters.

There, Jane starts to pull her life back together as she recalls the events that got her to this place.

As a young orphan, she was despised by her wicked aunt (Sally Hawkins), who sent her to an abusive school where a brutal education at least prepared her to take on a job as a governess for the ward of a local landowner, Mr Rochester (Michael Fassbender).

While most of Mr Rochester’s staff, led by Mrs Fairfax (Judi Dench), look up to him with a sense of respectful fear, the lowly governess stands her ground and asserts her independence.

Mr Rochester is impressed with the progress she makes with his ward and he’s taken with her strong personality, but while she begins to develop unhealthy feelings for her boss, he appears to be seeking a wife at his own social level, in the shape of an heiress, Blanche Ingram (Imogen Poots).

His impending nuptials force Jane to come clean about her feelings and she – like the rest of the household staff – is surprised by his response.

But a shocking secret from Mr Rochester’s past comes out of the blue to keep them apart, as unforeseen events from her own past change the landscape further.

For many devotees of Charlotte Brontë, the first question to come to mind will be “Why?” Given that the number of screen adaptations of this novel is in the region of twenty, do we need another?

There’s a sense in which some doubters need to accept that rightly or wrongly, many young people wouldn’t even consider watching a black and white film or a grainy colour TV miniseries if they can see a slick, all-singing, big-screen adaptation with that woman out of Alice in Wonderland and The Kids Are All Right. If it were simply about art, one could argue that perhaps we don’t need another adaptation, but this is the film business, and there’s money to be made from getting young people into the cinema – and there’s nothing like a much-hyped film about a book young people are still reading and studying to boost the fortunes of the British film industry.

The Sin Nombre director Cary Fukunaga was a brave and unexpected choice to helm this adaptation, but he’s come up with a bold interpretation of the material, imposing an arguably overused modern-day screen conceit of starting with – in this case – Chapter 27, before flashing back.

When used incorrectly, it’s an arch irritation, but for those unfamiliar with Charlotte Brontë’s work, the technique is effective here, immediately introducing us to a troubled and desperate young woman and posing the question of how she came to be so. This adds to the drama of the subsequent childhood emotional bullying she endured, at the hands first of her aunt and later of her teacher, as we’ve already seen at least some of the consequences.

Squeezing a four hundred page novel into a two hour film is always going to be a challenge, resulting in the fact that those already familiar with the characters and their history will get the most from the film and ensuring that for those new to the material, some of the twists and turns might seem a jump too far.

There is also a sense that despite pitch-perfect performances from Mia Wasikowska and Michael Fassbender, you don’t feel much of the burning chemistry that you would expect to tell the audience that this is a couple destined to be together.

This is inevitably one of those films where those who know the source material will get the most out of it, but they’ll also know all the complexities of the plot already – whereas those who have the most to learn about Jane Eyre’s tragic romance are the most likely to get lost in its complexities.

While the drama is intense, not that you can do anything about it when you are following an existing and much-loved text, it does feel a little clichéd – a young child rejected by her family, sent away to a brutal establishment, her pride demanding that she pulls her life back together, but misplaced love and complicated baggage getting in the way of contentment; even those who’ve never read the book or seen any of its previous adaptations will find something familiar – or perhaps true – about this film.

But even if it doesn’t strike the most original note or find the right emotional chord, the enduring tale of tragic fatalism, intense character interplay, eloquent wordplay, heart-wrenching performances, striking cinematography, and sumptuous costumes and production design make it a satisfying piece of cinema, nonetheless.