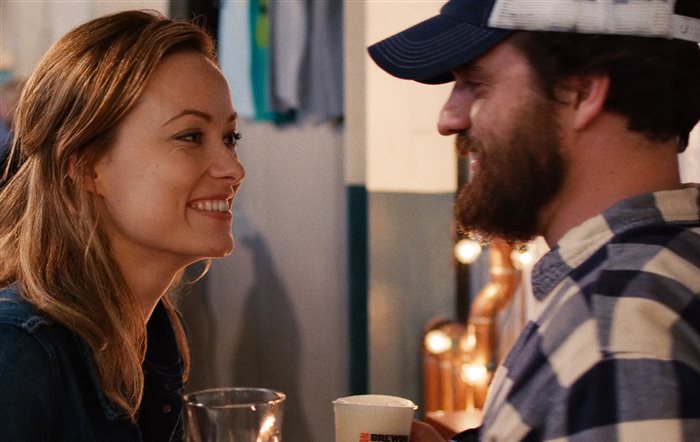 Free spirit Kate (Olivia Wilde) is the administrator at a Chicago brewery, where she spends most evenings drinking with the lads after work.

She has a particularly close friendship with one of her colleagues, Luke (Jake Johnson); their tactile flirtation betrays an obvious attraction that extends beyond the platonic.

But Kate is eight months into a relationship with the sensitive and bookish Chris (Ron Livingston) while Luke has long-since moved in with sweet-hearted domestic goddess Jill (Anna Kendrick), who’s been asking him to think of a timetable for marriage.

A weekend away on a double date throws new light on the couples, making them reassess their relationships.

From the outset, it’s clear roughly where this film is going, although the final destination is never quite certain, so at least an element of dramatic tensions remains, despite the fact that much of it feels familiar and lacking in direction.

The dialogue is largely improvised, which often adds an air of authenticity to a film, but with authenticity can come banality; part of the enjoyment we get from watching films made from the best screenplays is the enjoyment of the language, but everyday conversation can be rather boring and here, while the story unfolds as the director requires, the dialogue lacks spark.

Too often, Olivia Wilde and Jake Johnson resort to beer-fueled laughter, at the expense of any true examination of their feelings or regaling of interesting anecdotes. It’s fair to say that leaving much to the imagination can also lead to a greater emotional involvement for the viewer, but this has to be based on something more interesting.

With four central characters, all being strong and competent performers, the film doesn’t feel like enough of an ensemble piece.

Ron Livingston’s character is too quickly written off – he’s more of a catalyst, setting Wilde’s Kate on the path she thinks she wants to be on, rather than providing her with any emotional quandaries.

Anna Kendrick is an equally shallow character, clumsily sent out of town when the plot requires it.

One issue standing in the way of the likeability of many of the characters is their inability to take responsibility for their actions. Another problem is that it tries to be both dramatic and comic and misses the mark in both cases.

Ultimately, the film sets up an interesting dynamic, raising questions many people might identify with, about being with one person when you should be with another – or in the case of Jake Johnson’s Luke, quite possibly being in love with two people at once. But the film fails to explore the true consequences of such life-changing feelings – skimming over any depth, leaving us with the kind of superficiality that you might expect from a group of people who’ve had a little too much to drink.

This being the case, it’s also true that for a group of people who never seem to stop drinking, whether at work or at play, they never seem to get drunk, words are never slurred and fists are flung only once – by director Joe Swanberg in a cameo as the only character in the film who hasn’t touched any booze.