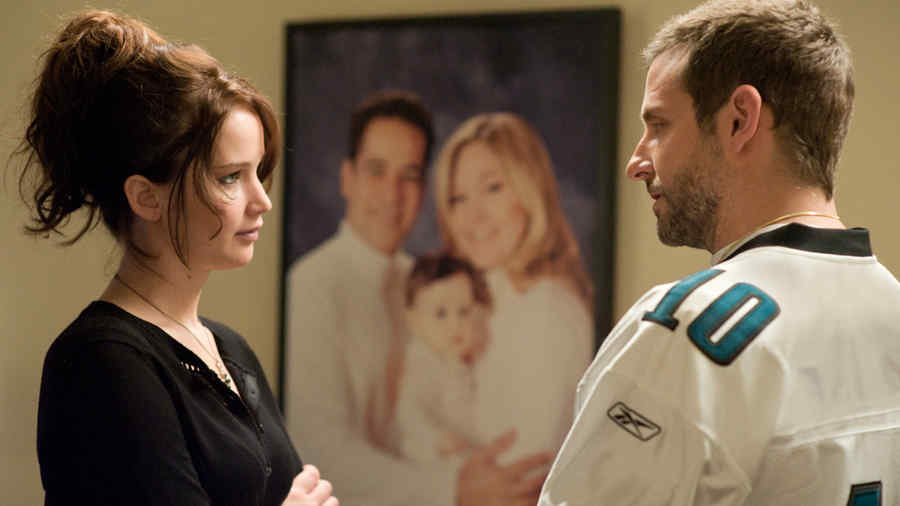 Pat (Bradley Cooper) has just moved back in with his parents (Robert de Niro and Jacki Weaver) in Philadelphia after being discharged from a secure mental facility.

He’s trying to put his life back together after the somewhat emotional break-up of his marriage to Nikki – something he has not yet accepted; his current plan is to get himself back into shape so that he can get his wife back.

Over dinner at his best friend’s house, Pat is introduced to the similarly damaged Tiffany (Jennifer Lawrence), whose husband recently died.

The pair become friends, but their motivations are somewhat clouded. Tiffany tells Pat that she knows Nikki and could pass correspondence to her, in breach of a restraining order, but she insists that if she is to help him contact Nikki, he has to help her; she needs a partner for a dancing competition.

Tiffany and Pat work to help each other try to rebuild their own and each other’s lives, always looking for the silver lining in each difficult situation that hits them.

The oddly named Silver Linings Playbook – the final word somewhat lost on anyone with little interest in American sport – is a peculiar beast. It’s a bit of a pick-and-mix -drama and light comedy, personal tragedies and family difficulties, attraction, obsession, delusion and a liberal sprinkling of mental illness on top.

Above all, the cinematic label that could most comfortably be stuck to the characters and the plot is “quirky” – but that’s not to say that it’s making fun or indeed making light of mental illness. From Pat’s bi-polar disease to Tiffany’s understandable depression and Pat’s father’s OCD and violent temper, the difficulties of living with such conditions – and people with such conditions – is sensitively handled, but the gentle humour betrays the fact that just because you have a mental illness, it doesn’t mean there’s no levity in your life.

There are big – and very competent stars – in this film – almost too big for what appears on the surface to be a low-budget independent dramedy, so as the story begins to unfold, it quickly begins to feel less original and more formulaic.

The personal foibles of the characters begin to veer further from reality and become catalysts for the plot, but film-makers follow formulae for a reason; they work.

From the moment Pat and Tiffany meet, there’s only one direction the plot can go, but while the destination is signposted almost from the start, the twists and turns aren’t always predictable and the journey itself is thoroughly enjoyable.

The chemistry fizzes between a reluctant Pat, in denial about his past, and a bereaved Tiffany, who bounces between an emotional vacuum and energetic flightiness.

Music is used to powerful effect – particularly a Led Zepellin track during a bi-polar episode – and while an uncomfortable medley at the dance-off denouement feels a little corny, almost belonging in another film, the sequence unravels so neatly any clunkiness can be forgiven.