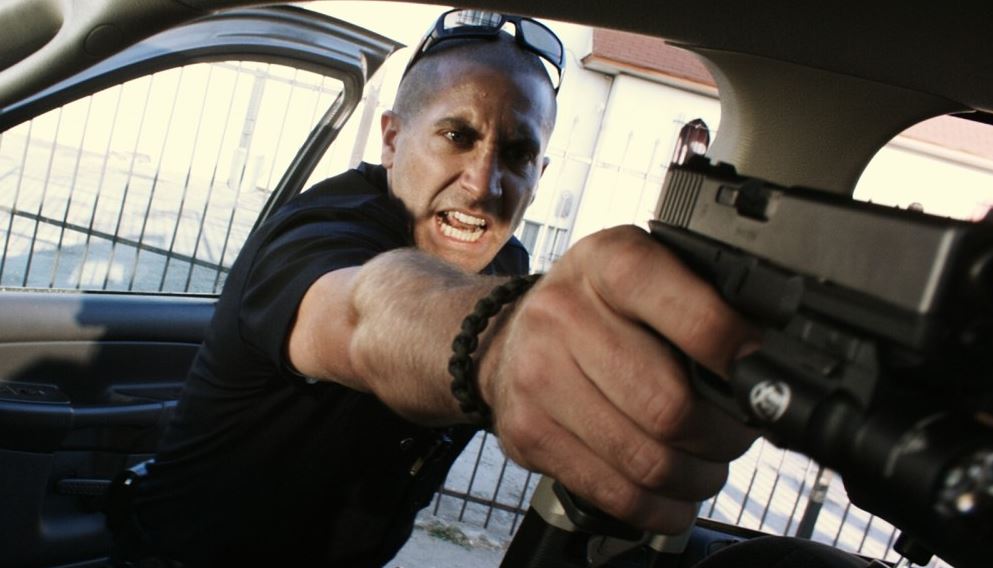 Brian (Jake Gyllenhaal) and Mike (Michael Peña) are two young and ambitious uniformed cops, cruising the LA underworld in their patrol car, in the slightly naive belief that they can make a difference – that they can clear the streets of drug dealers.

Brian is the more ambitious – and by extension the more bold – leading the pair into often dangerous situations, getting themselves in trouble for following leads that should be reserved for more experienced officers or highly trained SWAT teams.

Mike’s a little more reticent, because he has a wife and family – something Brian would like, but he’s truly married to his job.

When Brian and Mike seize drugs and weapons during a routine stop, the gang they belong to takes against the pair; no police officers want to find themselves in the position where the cartels they’re trying to get off the streets want to get them off the streets even more.

David Ayer has written about the police before, in films such as Training Day. This time, rather than travelling the well-trodden path of crooked cops, he gives us a pair of blue heroes – enthusiastic, honest, righteous – everything everyone wants from their friendly neighbourhood officers. The film almost verges into superhero territory, with the underdogs putting their lives on the line to protect the public.

It makes a change to see a film about the good guys, especially by contrast with the grim and gritty LA underworld that we’ve become familiar with through TV and films such as The Shield and the recent Rampart.

As well as being promising young officers, our two protagonists are best friends – closer than brothers – and against expectations, perhaps, as well as being good cops rather than bad ones, their friendship doesn’t get in the way of their goals.

It’s a true buddy movie about two young men who share their professional lives and even hang out with each other after they clock off. Their relationship is warm and funny, generating a lot of humour to counterbalance the stress that comes from their increasingly dangerous work.

Gyllenhaal’s Brian puts some distance between them and their work by living much of his life through a lens, filming the daily grind on his hand-held camera, whether it’s car chases, crime scenes or interactions with senior officers. Ayer takes this device a little too far, suggesting that his film is entirely shot by the leading characters, when clearly much of the footage was not.

After their japes and camaraderie has lightened the mood throughout, a downbeat ending leaves you feeling somewhat deflated, although it does take you back from the realm of superheroes to reality.

While the action sequences are thrilling and the naturalistic personal relationships – including Brian’s sprouting dalliance with his new girlfriend (Anna Kendrick) – are uplifting, End of Watch is so centred on the two protagonists that you feel there are hardly any other police officers in Los Angeles and, for that matter, there’s hardly anyone else out there for them to be protecting.

And structurally, there’s a sense in which it feels more like a string of well handled, exciting encounters with bad guys than any kind of traditional or coherent plot with character arcs that develop during the course of the film.