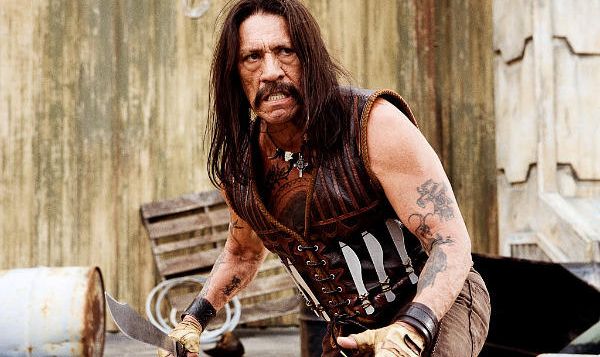 Machete Cortez (Danny Trejo) is a Mexican cop, not scared to take the law into his own hands if that’s the only way to beat corruption. When his own bosses are telling him to leave drugs kingpin Torrez (Steven Seagal) alone, he sets out to see that justice is done, but on this occasion, despite his efficient and effective machete-wielding, most of the blood shed belongs to his own family.
Some years later, Machete has arrived in a US border town where Agent Rivera (Jessica Alba) is trying to stop Luz (Michelle Rodriguez) operating a people smuggling ring from her burger van. Luz runs a network that’s bringing Mexicans across the border and finding them work on the black market.
She’s up against the combined efforts of local lawman Von Jackson (Don Johnson) and Senator John McLaughlin (Robert De Niro), who’s standing for re-election on a ticket of keeping the Mexicans out.
After winning a street brawl for money, Machete is offered a job, but it’s not the construction work he was expecting; he’s offered $150,000 to assassinate McLaughlin at a campaign rally – an offer, in film parlance, he can’t refuse.
But when things don’t go to plan, a conspiracy is uncovered that links everyone from the Senator to Torrez and once again, it’s left to Machete to see that justice is done, with a bit of revenge thrown in to sweeten the pill.

Machete, as a character, started his life in the most unconventional of ways. After a minor role in Robert Rodriguez’s Spy Kids franchise, he reappeared in his current guise in one of the trailers for non-existent films between the two halves of 2007’s Grindhouse double-bill. Rodriguez has now made the film of that trailer.
In keeping with its origins and the 1970s exploitation films it parodies, this Machete: The Movie looks cheap, cheerful and suitably dated, with subdued colours, scratchy images and acting that wouldn’t look out of place on Starsky & Hutch.
The story is every bit as tongue-in-cheek as it should be and doesn’t take itself at all seriously.
The problem is that the whole concept of Machete is a parody of a movie genre – essentially a single joke that was told perfectly in that 2007 mock trailer. – which makes this a two minute joke dragged out to an hour and a half.
So what can adding an extra one hundred minutes bring to the joke?
There’s some delicious comic-book machete-work and plenty of scenery-chewing fun from the likes of Steven Seagal, Robert De Niro and (“introducing,” according to the opening credits!) Don Johnson.
Another in-joke sees the production company, Hyde Park Entertainment, sending the wounded Senator to recuperate at Park Lane Hospital.
But however long you look at it, Machete is a two minute joke dragged out to an hour and three quarters – far too long for a movie of this kind, at the best of times.
It would be churlish to describe it as anything other than fun, but it’s the kind of stomach-churningly bloody, cheesily unoriginal fun that will please a post-pub, male, 18-30 audience, leaving most other demographics wishing they’d watched the 2 minute trailer from 2007 on youtube and spent their tenner on a burrito instead.