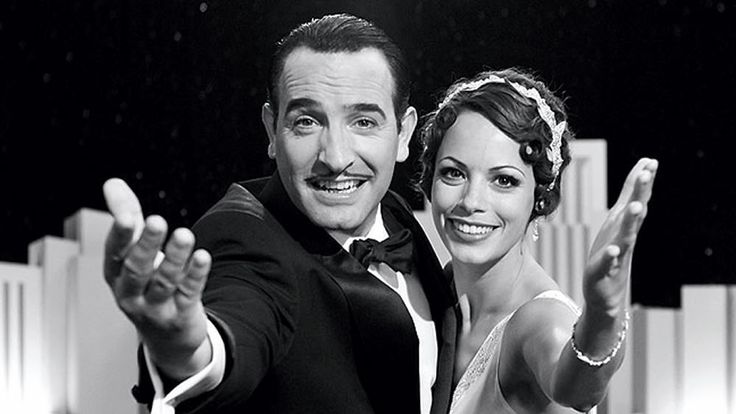 In late 1920s Hollywood, George (Jean Dujardin) is unquestionably the biggest film star of his time. But his star is fading. His time is ending.

The film industry is discovering sound and studio boss Al Zimmer (John Goodman) has decided that George is yesterday’s man – he wants to start making talking pictures with newer, younger talent. George is shown the door, and before long, his young prodigy Peppy (Bérénice Bejo) is the rising star; suddenly she, rather than her mentor, commands all the power and influence in Hollywood.

George is determined not to give up, funding his own silent movie, but when it flops, while Peppy’s new release tops the box office, he’s forced to reassess his life.

The Artist is one of the rarest of films that it’s almost certainly impossible not to like. There’s simply nothing about it not to like.

It’s a simple but moving story, beautifully realised by all those involved – it’s profound, yet has a lightness of touch – it’s heart-breaking, yet hilarious.

Michel Hazanavicius gives us an astonishingly faithful homage to silent era films, shot in soft-focus black-and-white, in a 4 x 3 format, with only piano music to entertain the ears while the eyes are occupied with glorious images of finely attired, neatly coiffed protagonists and a handful of title-cards to clarify the occasional lines of dialogue that lip-reading won’t quite help with.

There’ll be few film-fans well enough to get down the cinema to see this who’ll remember the last genuine silent movie they saw on the big screen, yet this feels nostalgic; anyone with any fondness for the past will be transported back eighty years in time.

During the past eight decades, the period has made it onto the big screen, although not often. Singing In The Rain, of course, tackled a similar theme – but viewed from a world where we can hear what’s going on. For Mel Brooks, the genre was parodied in Silent Movie. But here, we’re given a genuine silent picture that could have been made at the time.

Seeing a film like this now, it’s remarkable to note how much can be achieved with no audible dialogue – it’s deservedly picking up Best Screenplay nominations already, even though to an untrained viewer, the fact that there was a script at all might be hard to grasp.

The film is truly original – in so far as it is completely derivative – but it’s giving us something that hasn’t been seen – or indeed heard – since the era it depicts so beautifully and reverentially.

But it doesn’t progress the medium in any way – it doesn’t advance cinema in the way that other recent films that have stood out for their originality did.

The Blair Witch Project broke the mould for found-footage, pseudo-documentary – techniques that have been used since in films from Cloverfield to Paranormal Activity; Toy Story paved the way for computer generated animated features; and don’t get me started on James Cameron’s passion for 3D. In this industry, if anyone stumbles across a good idea, or something ground-breaking, others follow.

But it’s hard to imagine anyone seeing a silent, black-and-white film that looks and feels like it came from the 1920s or 30s as a way forward and following Michel Hazanavicius back to the past.

While it fits his storyline perfectly, in truth, it’s nothing more than a gimmick; a perfectly excecuted film-school experiment.

It’s also an issue when so much of a review is devoted more to the technical specifictions of the film, rather than it’s story, performances or direction. The plot itself is moving and entertaining enough, but it’s predictable, formulaic and rather lightweight. That said, Jean Dujardin’s uplifting performance and the the vision of Michel Hazanavicius forgive it any shortcomings. And the final twist, while not tremendously surprising when you know the provenance of the film and those behind it, is sweetly executed and adds to the understanding of the problem – George Valentin’s problem.

The Artist is as close to perfect as any film could be within its own terms, but as a comfortably familiar story that is technically rooted in the past, it won’t change the future – but will provide a wonderful present.

While it probably won’t stand out as one of the great films of the decade when viewed another eighty years hence, for anyone who has the good sense to see it on the big screen, The Artist will be a Christmas present that will undoubtedly lift your spirits.