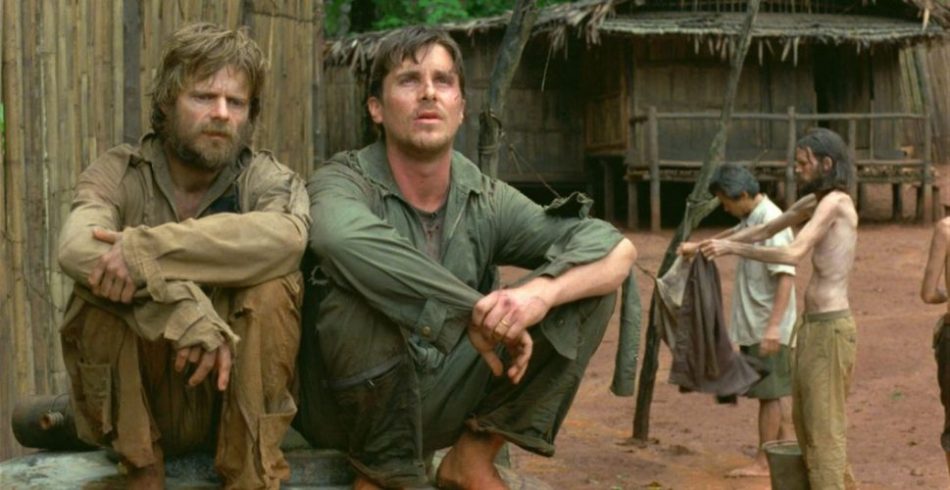 Dieter Dengler (Christian Bale) has joined the US Air Force because he loves flying – that’s all he wants to do. But just his luck, as he signs on the dotted line, the Vietnam War breaks out and he’s sent to fly in southeast Asia.

Sure enough, on his first mission, he’s shot down.

Despite his undoubted resourcefulness, he gets caught.

When he turns down an offer of freedom if he renounces his country, he’s locked up in a hell-hole of a prison – more of a wooden cage, really – deep in the jungle, guarded by desperate guerrilla fighters who are paid to guard – or kill – they don’t really care which.

The food is inedible and Dieter is chained to his despondent fellow prisoners-of-war for hours at a time.

Staying there is not an option, so the inmates – of varying degrees of fitness, enthusiasm and general morale – plan a daring escape attempt – but getting out of the prison complex is the first of many dangerous obstacles they have to contend with on their way to freedom – a journey where failure seems to be the most likely outcome.

This is the second time Herzog has visited this real-life story – last time it was as a documentary.

Bale is always good value for money and here, he delivers a particularly interesting performance, managing to squeeze humour from some of the most desperate, life-threatening situations, which is all the more unusual, coming from an actor so intense, that humour rarely shines through.

His main buddy in this film is played by Steve Zahn, usually known for his zany roles, but here, he’s the meek and timid one who spends almost the whole film with a grimace on his face.

This is – on the whole – a gripping tale of survival against all adversity – but it does become rather samey, in that sense, and because of the time-scales involved, there’s little time for character development or relationships to form.

The film is certainly exciting, but it’s too linear to be as satisfying as it might – there’s only ever one goal, one purpose – inevitably, perhaps, given that it’s a true story, the film has no depth and despite some of its jungle locations, feels a little claustrophobic.