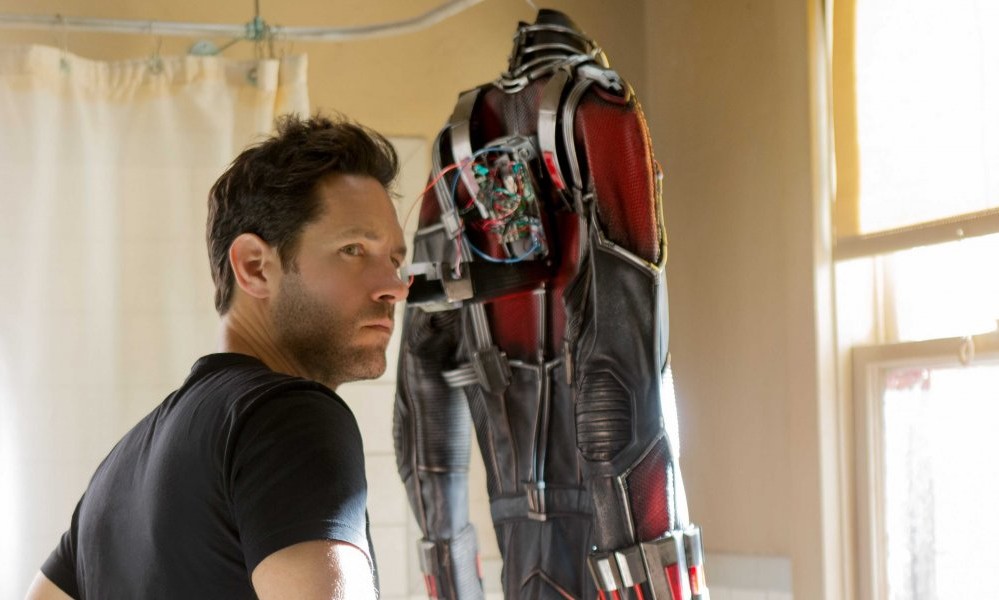 Small-time burglar Scott Lang (Paul Rudd) has just been released from jail and is trying to go straight, but he’s struggling to keep a job and pay maintenance for his daughter Cassie (Abby Ryder Fortson).

His friend – and former cell-mate – Luis (Michael Peña) persuades him to do one last job to help him get his life back on track; the burglary itself goes well enough, but he doesn’t find what he’s expecting.

The job brings him into contact with a billionaire scientist, Hank Pym (Michael Douglas), who’s been kicked out of the company that bears his name by upstart Darren Cross (Corey Stoll).

Pym was developing a suit that could shrink the wearer and give him super strength, but Cross is trying to use the technology for his own dastardly ends.

Pym persuades Scott to use his prototype shrinking suit to infiltrate his old laboratory, to try to stop Cross succeeding in creating a weapon of war, and to protect the integrity of his decades of work.

Originating from the pen of Shaun of the Dead creator Edgar Wright, and with the script reworked by the natural comic charm of Paul Rudd, with the man behind Anchorman and The Other Guys, Adam McKay, this film remarkably works as well as a comedy as it does as a super-hero film; while many other comic-book adaptations feel like super-hero films with the odd gag crowbarred in, Ant-Man is more a comedy film whose protagonist just happens to be a super-hero – and it’s a good comedy film, at that.

Wright was meant to be directing this too, but pulled out because of the overused excuse of “creative differences,” although he retains not only a story and screenplay credit but remains an executive producer.

Initially, presenting us with an ex-con burglar as our main character makes it hard – almost immoral – for an audience to be rooting for him, particularly when it appears that he plans to return to a life of crime. But Rudd’s effortlessly likable persona and the team-work of a thoroughly entertaining – and suitably surreal – script deliver one of the most enjoyable films of the year so far, regardless of the genre.

Ant-Man is one of Marvel’s lesser-known characters and his antagonist – Yellow Jacket – would be similarly unseen, until now, by anyone other than comic-geeks. But a lack of a history with the pair doesn’t stand in the way of any engagement in the plot. And the physics behind the technology is interesting and put to good use – if somewhat inconsistently – with him travelling around on the back of a flying ant and, in one of the most hilarious sequences, trying to out-run a Thomas the Tank Engine train in a child’s bedroom.

It’s always clear where the plot is heading but the good guys – including a delightful comic turn from from the usually intense Michael Peña – are always likable, while the villains are suitably sinister – and even efforts to bring a bit of reality to proceedings, through a love interest and the difficult relationship with the ex-wife, are thoughtfully handled.

Ultimately, the point about Ant-Man is that the smallest super-hero is the biggest fun, not least because you don’t have to be a comic-book geek to enjoy it.