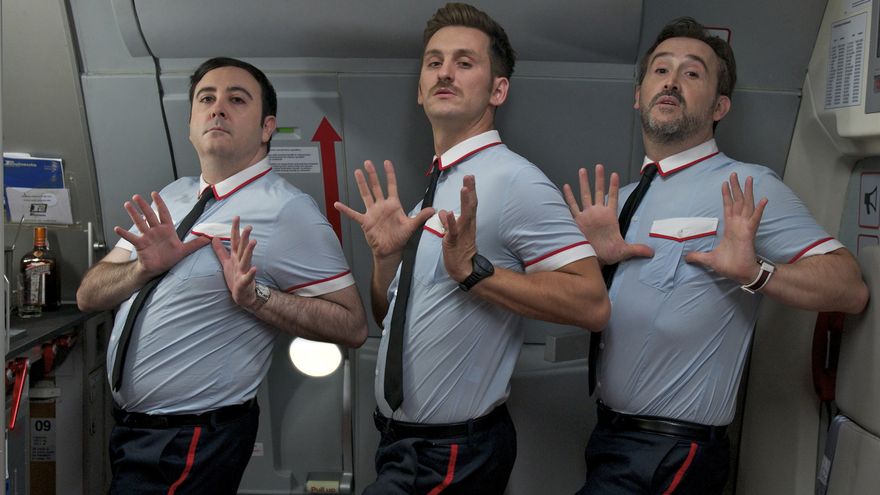 So far, you’d think this was a thriller, but you couldn’t be further from the truth. It’s a bawdy sex farce.

Scared to tell the passengers what’s happened, the crew decide to drug everyone in the economy cabin – as you do – while they circle, waiting for a runway to be prepared for their landing.

In the meantime, the small group in business class – including a high-class hooker, a fraudster on the run, a honeymoon couple, a hitman, a psychic and a fading actor – do their best to keep their spirits up, with the help of a cabaret show and drug-fuelled free bar from the entirely gay stewards and cockpit crew.

What is Pedro Almodóvar playing at? He’s clearly having fun, but are we expected to join him?

Take a step back and this looks very much like his lighter fare – bawdy, colourful, lewd – but his previous work has always had a point – something to say.

This has nothing to say about anything – except, perhaps, that every man is gay deep down – and it’s OK for a woman to rape a comatose man.

Almodóvar says this film is a satire on Spanish society, but without the references, the film has to work on its own merits – and doesn’t.

The curtain separating the sleeping economy cabin and the colourful business passengers apparently represents the curtain of a theatre, with the three-strong cabin crew – three flamboyantly gay men – putting on a song-and-dance show to entertain the sparsely populated upper class, while the pilots, one bisexual and the other  latently homosexual, grapple with the controls and with controlling the drinking of the cabin crew.

We’re given background to the business-class passengers and witness a handful of their interactions with loved ones back down on earth, but with none of the urgency of an impending disaster seen in United 93, for example.

The atmosphere is ill-judged and uneven – attempts at humour fall-flat and at times feel distasteful and thoroughly inappropriate.

How someone so talented and with such a successful body of work behind him can misfire so strongly is hard to fathom.

It’s Spanish title, Los Amantes Pasajeros, is a clever play on words, but I’m So Excited is as ill-judged at title as the rest of the film.

Perhaps the most peculiar thing about the film, as I said about last week’s The Look of Love, is its certificate. But where I expressed surprise that despite its focus on sex and drugs, Michael Winterbottom’s Paul Raymond biopic was reserved for only the oldest of audiences, it’s all the more astonishing that this film gets away with a 15. In The Look of Love, we saw the destruction that drugs can cause – a death by overdose – and the sex had the innocence of a sixties comedy, with full frontal nudity being seen, from a distance, as strippers danced on a stage. The drugs were portrayed as bad and the sex was not graphic or violent. In this film, spoiler alert, the drugs – hidden up someone’s backside – are taken with relish and have no side-effect other than increasing the sex-drive of the characters who take them, while the sex itself is graphically energetic, includes detailed references to gay oral sex and, most disturbingly, features a middle-aged woman losing her virginity by taking advantage of one of the drugged passengers in the economy cabin.

How a film that portrays drugs as lethal and sex as matter-of-fact gets an 18 certificate while one that portrays drugs as harmless and male-rape as humorous gets a 15 is incomprehensible. The BBFC’s own explanation suggests that this might be because the sex in I’m So Excited features no nudity and is played for comic effect – making fun or rape, fully clothed or otherwise, strikes me as being something that should be reserved for the most discerning of adults – not 15 year olds.