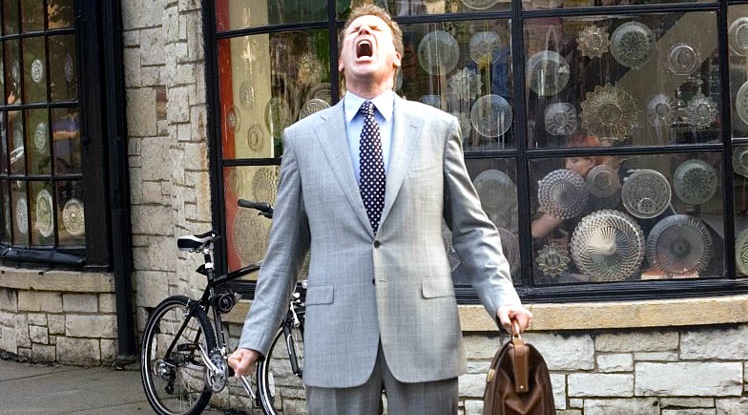 Harold Crick (Will Ferrell) is a boring, lonely taxman. But at least he knows where he stands. His life is completely predictable – governed by numbers: the same number of tooth brush strokes every day, the same number of steps to the bus-stop ever day. But how does he know this? He hears a disembodied voice telling him.
He’s suddenly become aware of a voice that’s describing everything he does. It’s as if someone is narrating his life.
CUT TO AN OFFICE ACROSS TOWN: Author Kay Eiffel (Emma Thompson) has writer’s block. She’s trying to work out how to kill the main character in her latest book – a lonely taxman called Harold Crick.
CUT BACK TO HAROLD: He’s just worked out that not only is someone narrating his life, but that same someone is trying to work out how to kill him, so he seeks the help of an eminent English Literature professor, Jules Hilbert (Dustin Hoffman), to trace the murderous narrator of his life and potential death.
During a business trip to Ana (Maggie Gyllenhaal) Pascal’s bakery, he unexpectedly finds that he’s checking more than just her accounts.
How ironic that the very moment when Harold’s life appears to be nearing its inexorable is the same moment that someone finally enters his life who might actually make it worth his while to stay alive for.

There’s a sense in which this self-referential, sub Charlie-Kaufman, knowing script thinks it’s far more clever and original than it actually is. With different levels of reality coexisting, films like the Truman Show got there first, and were deeper and more thought-provoking.
But oddly, it works. It’s tremendously enjoyable and cheekily surprising as the intricate layers are carefully unfolded. It feels far more fresh than it has any right to.
Initially, at least, it moves along at a brisk pace, as one by one, the elements and array of oddball characters are revealed.
As the film progresses though, the pace slows up and its sharp wit blunts somewhat.
An unexpectedly low-key Ferrell is balanced by a bubbly Hoffman, just a notch or two down from his Huckerbees performance. Thompson provides the motherly tones the film needs to ground it in a sense of reality, however necessarily disjointed. With little more to do than to bake cookies, Gyllenhaal is the least engaging of the main characters.
With this film, Will Ferrell does what Jim Carrey did with The Truman Show, what Robin Williams did with Dead Poets Society, what Bill Murray did with Lost In Translation – you get the picture – a wild and wacky comic actor, turning his hand to a more downbeat, dramatic role, and against the odds, pulling it off. He’s surprisingly amiable and empathetic and we certainly want him to avoid the executioner’s axe – or the author’s key-press – every bit as much as he does. He certainly proves – like his predecessors – that he can get a laugh just as easily by standing still and looking bemused as he can by running around, shouting in silly voices.
The film certainly has its faults though – not least the fact that Harold’s narrator seems to disappear for large chunks of the film, when the director wants us to concentrate on the less interesting love-story element, only to reappear again as required to nudge the main story forward again.